Amber Rudd yesterday dropped her opposition to a No Deal Brexit in a move that could see her appointed as Boris Johnson’s foreign secretary.

The Work and Pensions Secretary – who led Cabinet opposition to leaving the EU without a deal earlier this year – said she now accepted it would be ‘part of the armoury’ in negotiations.

The dramatic shift lifts the bar to her serving in a Cabinet led by Mr Johnson, who has said he will only appoint ministers to his top team if they are ‘reconciled’ to the possibility of a No Deal Brexit this autumn.

Sources in Mr Johnson’s camp have suggested Miss Rudd could be rewarded with the post of foreign secretary if she softened her stance on No Deal. 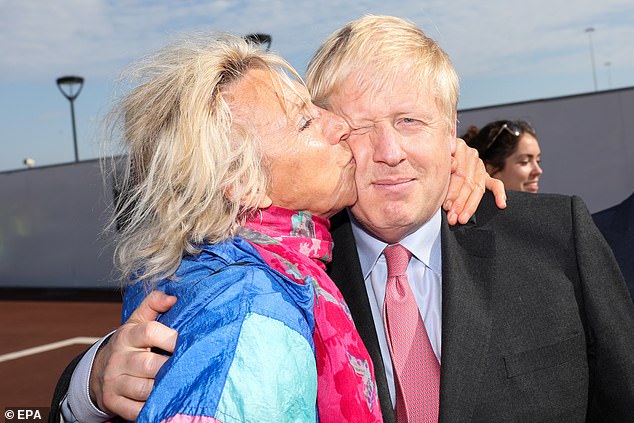 Embracing change: Boris Johnson is kissed by a well-wisher in sunny Dover yesterday, where he stopped off while campaigning to become the next leader of the Conservatives

The move came as jockeying for jobs in Mr Johnson’s Cabinet intensified, with Treasury Chief Secretary Liz Truss making a pitch for promotion to chancellor.

Home Secretary Sajid Javid has been heavily tipped for the role. But at a Westminster lunch yesterday, Miss Truss said she hoped for a job ‘in the engine room of the British economy’. She also spoke out strongly in favour of Mr Johnson’s controversial plans to slash taxes for the better off.

Miss Rudd helped block a No Deal Brexit this year, arguing it would leave the UK ‘poorer’. But, with both Mr Johnson and his Tory leadership rival Jeremy Hunt putting No Deal on the table, she yesterday backed down. 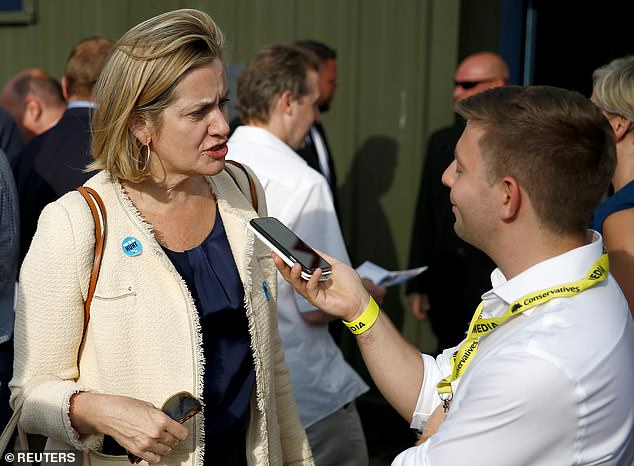 Miss Rudd told Talk Radio she ‘accepted’ that No Deal ‘is part of the armoury’ – adding that it would still be better to reach a deal before the UK leaves the EU in October.

A source close to Miss Rudd said she had agonised over the decision, but said she believed ‘things have changed’ since March, with Mrs May’s deal rejected three times, compromise talks with Labour off, and the rise of the Brexit party threatening any hope of a Tory majority.

How she changed her tune

February 23: ‘Far from Brexit resulting in a newly independent UK stepping boldly into the wider world, crashing out on March 29 would see us poorer, less secure and potentially splitting up… We must be the party that promotes business, protects our security and preserves the Union. None of this would be achieved by pursuing a No Deal Brexit.’

Yesterday: ‘Both candidates have said that No Deal is part of the armoury in the negotiations. And I have accepted that. The situation is that we are leaving by the end of October, but it would be so much better to get a deal.’

The source added: ‘No one is pretending this is the most comfortable thing she has ever done – obviously she wants a deal. But she got what she wanted in March, we extended for seven months and we have got nowhere.

‘She believes a general election, and the risk of Corbyn, is worse than No Deal – that is ultimately what it comes down to.’

Miss Rudd has previously clashed with Mr Johnson. In a TV debate during the 2016 EU referendum campaign, she said he was ‘not the man you want driving you home at the end of the evening’.

Former Tory minister Nick Boles mocked her decision to accept No Deal yesterday, saying: ‘So she will let Boris Johnson drive her home after all – so long as it’s in a ministerial limo.’ But Mr Boles, who quit the party over Brexit, later backed down, saying: ‘A Cabinet without her in it would be far worse than one with.’

Sources in Mr Johnson’s camp have acknowledged he needs to appoint at least one woman to one of the great offices of state.

One source suggested that neither Miss Truss nor other prominent female supporters such as Priti Patel or Maria Miller were ready for one of the top jobs.

But Miss Rudd could be considered for a move to the Foreign Office after Jeremy Hunt’s personal attacks on Mr Johnson prompted speculation he would be demoted.

Meanwhile, former attorney general Dominic Grieve – who has been a Tory member for 47 years – suggested he was likely to quit the party if Mr Johnson becomes leader later this month.

The government must be alert to potential cyber attacks from countries such as China, ministers have said as tensions increase between London and Beijing. Last…

Thirteen people have been arrested in Sussex after a large group of youths “became aggressive towards police”. Officers were called to Shoreham town centre at…