WASHINGTON — President Biden faces a fundamental question as he convenes heads of state this week in a virtual summit to declare that the United States is ready to reclaim a leadership role in the fight against climate change: Is America’s word still any good?

And on Friday, China likened the United States’ desire to rejoin the Paris Agreement global warming accord that Mr. Trump abandoned to a naughty child trying to sneak back into school after cutting class.

Perhaps nowhere is the skepticism about U.S. credibility as consequential as on the issue of climate change.

“If America fails to lead the world on addressing the climate crisis, we won’t have much of a world left,” Secretary of State Antony J. Blinken warned on Monday in a speech that kicked off a weeklong climate push that culminates in the virtual Earth Day summit meeting Thursday and Friday.

The need for American leadership is enormous, a point Mr. Blinken emphasized in his address at the Chesapeake Bay Foundation Headquarters in Annapolis, Md., on the central place global warming would take in U.S. foreign policy.

And despite a four-year absence from the climate fight, Mr. Blinken said America would not shy from throwing its weight around in order to make sure other countries do more to cut their emissions. With other countries producing more than 80 percent of climate-warming pollution, he said, the United States has a duty to do so.

“Our diplomats will challenge the practices of countries whose action, or inaction, is setting us back,” Mr. Blinken said. “When countries continue to rely on coal for a significant amount of their energy, or invest in new coal factories, or allow for massive deforestation, they will hear from the United States and our partners about how harmful these actions are.”

Some countries already are pushing back.

“The U.S. chose to come and go as it likes with regard to the Paris Agreement,” Zhao Lijian, the spokesman for the Chinese Foreign Ministry, said Friday in pointed remarks ahead of the summit. “Its return is by no means a glorious comeback but rather the student playing truant getting back to class.” 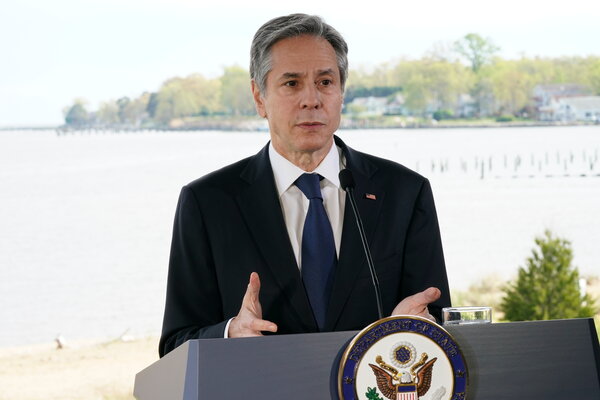 The meetings ended with an agreement to jointly cooperate on the climate crisis, but no promises of new targets. Mr. Zhao later told journalists that despite pushing China to do more, the United States “has offered nothing on how it plans to make up for the lost four years.”

There is good reason for such skepticism. After all, Mr. Biden’s summit marks the second time in a generation that the United States has re-entered climate negotiations after abandoning a global agreement to reduce planet-warming greenhouse gases.

Mr. Biden was vice president when the world applauded the Obama administration for resuming climate talks after his predecessor, George W. Bush, rejected the 1997 Kyoto Protocol climate treaty. Now he’s trying to lead another comeback as the U.S. returns to the Paris Agreement that Mr. Trump deserted in a flashy show of defiance — and perhaps hoping leaders don’t remember the Obama administration’s 2015 assurances that its climate policies could sustain a Republican administration.

“Something countries of the world are very familiar with is this whiplash of going from a Republican to a Democratic to a Republican administration,” said Robert N. Stavins, an environmental economist at Harvard University, adding, “That goes to the heart of the long term credibility.”

Complicating those trust issues is the fact that, while the Biden administration may declare on Thursday that the United States is “back,” Congress remains as divided as ever on climate.

Mr. Biden is expected Thursday to announce a new U.S. target for cutting greenhouse gas emissions by 2030. How ambitious other countries feel America’s new goal is, and how credible its path toward getting there is viewed, will largely determine how much the administration can prod other nations to make stronger commitments.

Senator Mitch McConnell of Kentucky, the Republican leader, has already said his party will oppose Mr. Biden’s $2 trillion infrastructure plan, which is currently the cornerstone of the administration’s efforts to meet current and future climate goals. A group of Republican House leaders last week also introduced legislation calling for a wholesale renegotiation of the Paris Agreement and denounced Mr. Biden’s plans for global re-engagement.

“Anyone who says the United States is united in working on climate change is drinking the Kool-Aid because we aren’t,” said Samantha Gross, director of the Energy Security and Climate Initiative at the Brookings Institution.

White House officials said this week the United States remained credible; America is still on track to meeting the Obama administration’s goal of cutting economywide emissions about 28 percent below 2005 levels by 2025, despite the Trump administration rollbacks.

But those numbers are arguable. This year, a study from the Rhodium Group did estimate that U.S. greenhouse gas emissions were about 21 percent below 2005 levels at the end of 2020 — putting the country within striking distance of the Obama administration’s pledge under the Paris Agreement. But about a third of that decline was because of the coronavirus pandemic, which sharply curtailed driving and business activity last year. Emissions will very likely rise again this year as the economy rumbles back to life unless policymakers enact significant new clean-energy policies, the study warned.

Ali A. Zaidi, the White House deputy climate adviser, pointed to another factor that should bolster U.S. credibility: American climate pledges go beyond the word of Washington. Yes, Mr. Trump abandoned the Paris Agreement. But, he said, “our states and our cities and our businesses and our workers stayed in.”

Mr. Blinken said the United States would “lead by example” by investing heavily in clean energy. And he added a few warnings to nations he needs as climate partners. He did not name Brazil, but he warned that rainforest destruction would not be tolerated. And in an apparent message to China, he said cooperation on climate was not a “chip” countries could use to avoid scrutiny of “bad behavior” on human rights and other issues.

“Climate is not a trading card, it’s out future” Mr. Blinken said.

Many diplomats said this time around they are more cleareyed about the ability of the United States to commit on climate change. But they were nevertheless inclined to give the Biden administration the benefit of the doubt.

“I think on climate change the U.S. policy is viewed like a pendulum,” Malik Amin Aslam, adviser to the Pakistani prime minister on climate change, said in an interview. Vulnerable countries are just “happy that the Biden administration has put the pendulum in the right direction,” he added.

Rondald J. Jumeau, a former ambassador of the Seychelles to the United Nations and a longtime climate change negotiator, said he was looking with “qualified excitement” to the Biden administration’s announcements and hoped the United States could follow through, not only on emissions cuts but also finance to small island nations and other vulnerable countries.

In addition to rolling back climate regulations, Mr. Trump stopped payments to the Green Climate Fund to help poorer countries transition to clean energy and adapt to the consequences of climate change. Mr. Biden has vowed to restore funding, starting with $1.2 billion this year, subject to Congressional approval.

“I think all of us know the American political system by now,” Mr. Jumeau said. “If we haven’t learned during the Trump years, we’ll never learn how dysfunctional it is.”

Adam S. Posen, president of the Peterson Institute for International Economics, said America’s inconstancy on the world stage started long before Mr. Trump. From climate change to international development to trade laws, he said, allies have learned to live with the shifting priorities of Republicans and Democratic administrations as Congress remains largely unable to pass major policy into law.

“Obviously, Trump made it worse because of incompetence and overt nationalism,” he said.

The problem for the world is that, on global issues like climate change, America holds all the diplomatic cards.