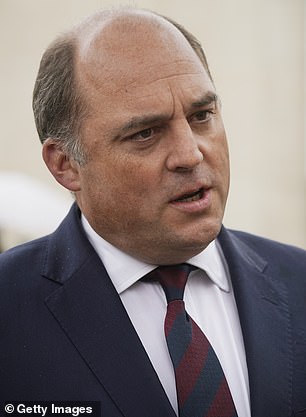 Ben Wallace last night ruled out an amnesty for terrorists in Northern Ireland, claiming they should be put ‘in the dock’ for their crimes.

The Defence Secretary called for a reconciliation process into the Troubles, which could see individuals confess to their crimes knowing they wouldn’t be prosecuted – but he refused to condone an all-out reprieve.

It is the first time a Secretary of State has raised the prospect of reconciliation.  Senior Tory MPs have previously said a Nelson Mandela-style commission would be the best solution.

‘What I do think is that there a place for reconciliation but how we get there… we must make sure we don’t let off the hook the murderers that are still out there and need to be hunted down and convicted for the killings that they took part in.’

He was speaking at a memorial service at the National Memorial Arboretum in Staffordshire to mark 50 years since the beginning of Operation Banner in Northern Ireland.

He said there was an imbalance in probes currently because the Ministry of Defence held records whilst terrorists did not.

He said: ‘At the moment there’s a lot of attention on our veterans because we have the records. Soldiers went out, did their job, did their duty.

‘They didn’t pretend they didn’t do something and so the investigators start where all the data is and all the records but the terrorists, they didn’t keep any information.’

He went on: ‘So what we’ve got to make sure is that in the legacy that we have to address, if there is something to address, that it’s balanced and it reflects the reality that the vast majority of deaths in Northern Ireland were caused by terrorists and most of the other deaths were actually caused by people defending people who couldn’t defend themselves.’

He said he wanted to see more support going to veterans who were having to face inquests into the Troubles.

Mr Wallace, a former Scots Guard who served in Northern Ireland himself, earlier told the Mail that veterans should not be fearing a knock at the door.

Under the current plans, veterans in their 60s and 70s would face being quizzed about their actions decades ago as part of a probe by a new taxpayer-funded unit.

Ministers are trying to find a solution that would stop soldiers and police officers facing such lengthy probes.