The 51-year-old was tested by police at his Vaucluse home about 1am on Thursday as part of a raft of strict Supreme Court bail conditions. 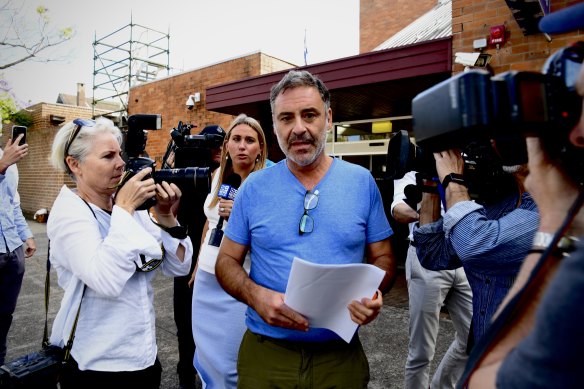 O’Keefe, who was in 2017 awarded a Medal in the Order of Australia for services to charity and television, was on bail after an incident in January in which he allegedly kicked, punched and attempted to choke his business partner.

Unshaven and wearing a blue T-shirt, O’Keefe appeared downcast in the dock at Waverley Local Court on Thursday afternoon as his barrister Sebastian De Brennan told the court there were “concerns about contamination” of the drug sample.

“A male is seen to be leaving the accused’s residence and was … found with an amount of prohibited drugs. Your honour might infer from that someone has gone into the house, had drugs on their person,” he told magistrate Jacqueline Milledge, noting most of O’Keefe’s social circle has been drug users since his arrest and release to a rehab facility.

“These tests are not foolproof.

“He’s trying to get back on track, slowly but steadily going in the right direction.”

O’Keefe intends to obtain a legal practising certificate and rebuild his relationships with family and friends, De Brennan said.

“He is determined not only to rehabilitate but reintegrate.”

“That’s what we discovered in court today, that there’s a high probability of contamination [of the drug sample],” he said. He declined to comment when asked how the sample would have been compromised.

O’Keefe is facing two counts of intentionally choking without consent, three counts of common assault and one count of assault occasioning actual bodily harm over the alleged January incident at his Kent Street flat. A court will determine the matter in February.

O’Keefe was a host at Channel Seven for 17 years until his contract was not re-signed at the start of 2021.