Angela Rayner joked about being compared to Sharon Stone in Basic Instinct during a light-hearted podcast this year.

Labour’s deputy leader is at the centre of a sexism storm after Tory sources told The Mail on Sunday that she tried to put the Prime Minister ‘off his stride’ by crossing and uncrossing her legs when sitting opposite him in the Commons.

Mrs Rayner has condemned the claims as ‘desperate, perverted smears’. The Prime Minister has led Tory criticism, describing the suggestion as ‘misogynistic tripe’. 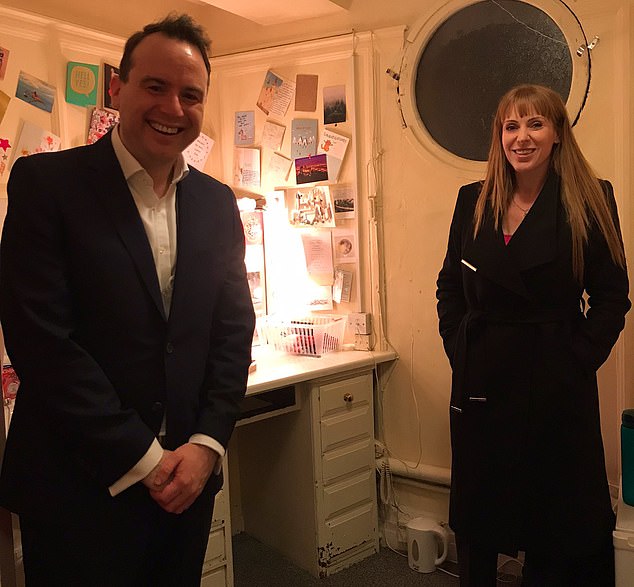 Angela Rayner (AR): … there is a tint of misogyny in it. I’ve gotta say it, you know I get quizzed on… Every time I do a PMQs [Prime Minister’s Questions] somebody has an opinion on what I wear. Did you see the meme about Sharon Stone like I was doing it at PMQs? I was mortified [laughs]

AR: Like they did this whole like meme about me apparently doing the whole, you know whole, the old… [she and audience laugh] I was like when did I do that? [laughs]

MF: I’ve not seen that at all.

AR: Did you not see like the Fatal Attraction thing? When she did the whole g*****r thing?

MF: I’ve seen the film but I wasn’t aware…

AR: I wasn’t aware I did it but apparently like there was this whole meme about how my dress was like a bit revealing but I didn’t think it was think it was. It was a perfectly suitable Karen Millen – in the sale by the way [laughs]

MF: But what was the theory? That you were doing that to distract Boris?

MF: It’s quite interesting watching you go up against him because there seems to be, and I know you’re ideologically opposed, I’m sure you have some very strong opinions on what he’s been getting up to. Oddly though, in Parliament these rivalries get thrown together where there’s clearly a bit of mutual respect. Like I think he has a level of respect for you like he seems to enjoy it when you are at the dispatch box.

AR: Yeah, I think he has got a bit of a romance going on there somehow hasn’t he, cus he… Do you know what I think it is, it’s like ‘cus Michael Gove kinda did this as well. I think they try and, err, ‘if you can’t beat them, smooch them’. Do you know what I mean? I think there’s a little bit of that going on. It’s a bit like ohh, you know it’s like, you can’t beat a puppy. Do you know what I mean? You can’t beat a seal. So like working class girl from council estate – ‘if I start attacking her I’ll look really crap as a posh guy from a posh school so I’ll just try and compliment them in a sort of backhand way’. I think that’s how they try and sort of deal with me. Because they don’t really know how to deal with me. That’s the thing.

Speaking at a comedy event in January, Mrs Rayner said she was ‘mortified’ by the comparison with Miss Stone’s infamous character in the 1992 thriller – but appeared to see the funny side.

In a light-hearted question and answer session with comedian Matt Forde she volunteered the fact that her appearance at Prime Minister’s Questions that month had drawn comparisons with Miss Stone, joking that it had sparked an internet meme of her crossing and uncrossing her legs.

Speaking about her treatment as a senior woman in politics, she told the audience at London’s Duchess Theatre: ‘There is a tint of misogyny in it. Every time I do a PMQs somebody has an opinion on what I wear. Did you see the meme on Sharon Stone like I was doing it at PMQs? I was mortified.’

In the audio from the recording of Mr Forde’s Political Party podcast she can be heard erupting with laughter as she added: ‘They did this whole meme about me doing the whole, you know the old …’

She added: ‘I wasn’t aware I did it but apparently there was this whole meme about how my dress was a bit revealing, but I didn’t think it was.’

Mr Forde asked if the suggestion was she was trying to distract the Prime Minister. Mrs Rayner laughed and replied: ‘It don’t take much does it? I don’t need to do that.’

She also laughed at suggestions that the PM flirted with her when they clashed at the dispatch box, saying that Mr Johnson and other male ministers ‘don’t know how to deal with’ a working class woman. She told Mr Forde: ‘Yeah, I think he has got a bit of a romance going on there somehow.

‘Michael Gove did the same and think they have this thing – “If you can’t beat them, smooch them”. Do you know what I mean?

‘You can’t beat a puppy. You can’t beat a seal. Working class girl from council estate, “If I start attacking her I’ll look really c**p as someone from a posh school so I’ll just sort of compliment them in a backhanded way”. I think that’s how they try and deal with me. Because they don’t know how to deal with me.’

In an interview with ITV’s Lorraine show yesterday, Mrs Rayner donned a trouser suit, saying that she did not want to be ‘judged for what I wear’.

The 42-year-old politician said she had been ‘crestfallen’ at the claim she tried to distract the PM with her legs, saying she had had to prepare her children for what would be written about her.

But she said she had been ‘heartened’ by the public reaction.

‘All I worry about when I’m at the despatch box is doing a good job and being able to do justice to my constituents and the work I’m doing, so I was just really crestfallen that somebody had said that to a paper and a paper was reporting that,’ she said.

‘It wasn’t just about me as a woman, saying I was using the fact I’m a woman against the Prime Minister.’

A Labour source last night denied Mrs Rayner had not been offended by the comparison with Stone’s Basic Instinct scene when she spoke out about it in January.

The source said: ‘Angela clearly said how deeply hurt she felt at the misogynistic comments aimed towards her, and has spoken passionately about the sexism she has faced and her fear that it could discourage women who want to enter politics.’