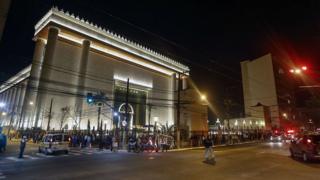 Prosecutors in Angola have ordered the closure of places of worship belonging to one of Brazil’s biggest churches, accusing it of corruption.

At least seven buildings belonging to the Universal Church of the Kingdom of God (UCKG) have been seized in the capital, Luanda.

Prosecutors said the evangelical church had been involved in tax fraud and other fiscal crimes.

Last year about 300 Angolan UCKG bishops broke away from the Brazilian leadership, accusing it of mismanagement and not being African enough. UCKG officials described the accusations as “defamatory”.

The UCKG claims to have about eight million members in Brazil and branches in several African countries. It promotes “prosperity theology”, whereby believers are told their faith and donations to the Church will lead to material wealth.

The row started last year when Angolan bishops broke away from the Brazilian Church, accusing it of “fiscal evasion” and of practices contrary to the “African and Angolan reality”.

“These apprehensions result from the fact that in the records there are enough indications of the practice of crimes of criminal association, tax fraud, illicit export of capital, abuse of trust and other… illegal acts,” he said in a statement.