A protestor has been arrested amid clashes between opponents and supporters of a drag queen story time show at libraries in Bristol.

The groups both staged demonstrations outside Henleaze Library in Bristol today, where drag queen Sab Samuel, 27, who performs as Aida H Dee, was due to read to children at 11am. The event was delayed and then cancelled.

The event attracted large groups protesting and supporting the show – around 15 people staged a demonstration against it and claimed the performer was ‘illegally grooming children’.

One protestor even said they planned to put Aida under citizen’s arrest.

Counter-protestors branded the group ‘fascists’ and said they were standing up for ‘parents, children and drag queens’. 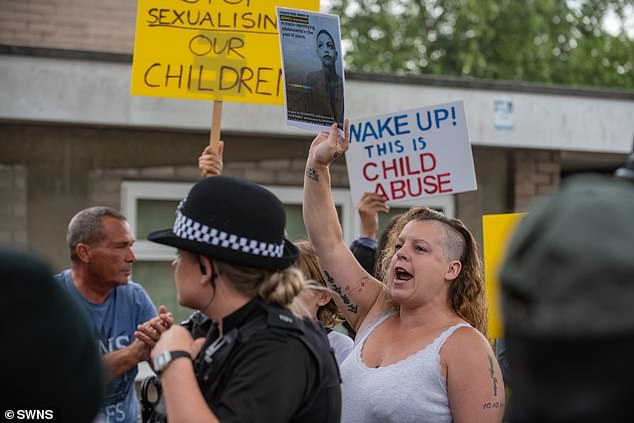 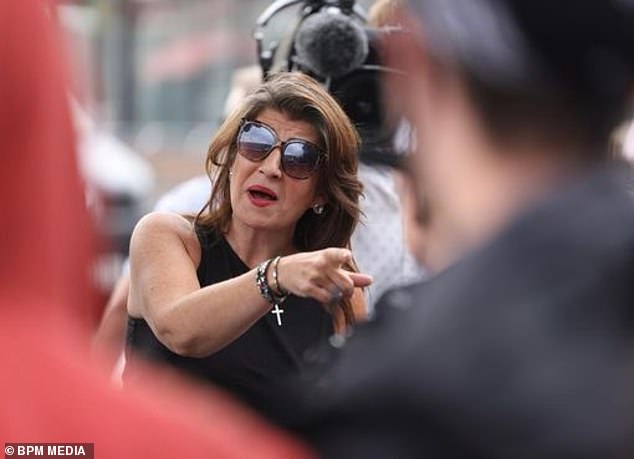 Protestors clash outside Henleaze Library in Bristol before the event this morning, which was cancelled 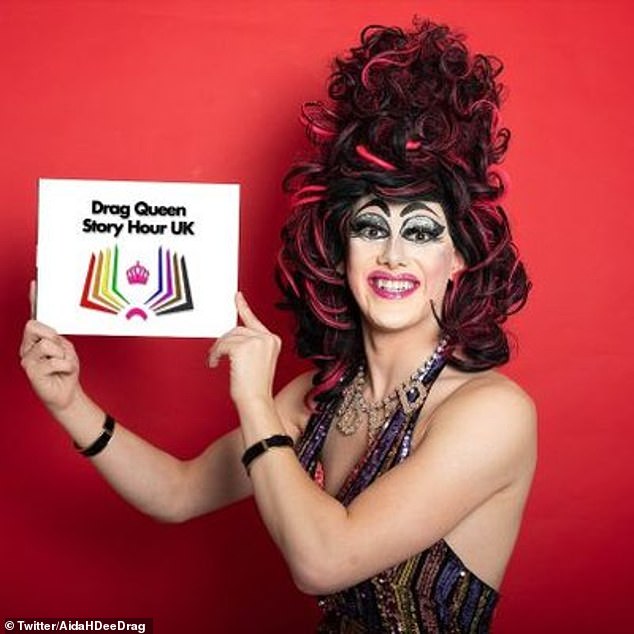 Sab Samuel, 27, who performs as Aida H Dee, runs Story Hour UK. He was due to read to children this morning – although the event was cancelled, a second went ahead at a different library 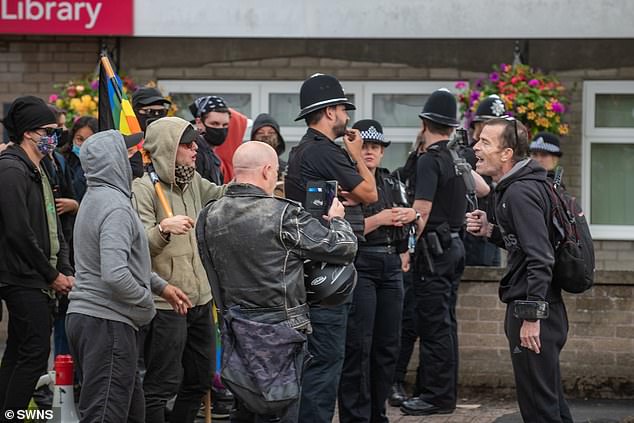 Masked counter-protestors argue with a man outside the library

A video shows a protestor explaining the group’s opposition to the drag queen story hour and claiming they have protest groups ‘all over the country’, mobilised to ‘put an end to this sexual exploitation of children.’

Footage also shows the two groups goading each other and exchanging chants outside the library.

The cancelled event was planned to be part of Aida’s drag story time tour around Bristol. Five others are planned, including one that was set for 2pm today which went ahead.

The second event today at Hillsfield Library was also mobbed by protestors, and attendees had to get through a crowd of them to reach the building.

A large police presence was at the scene and one protestor was arrested – it is not clear which side they were on.

The protest group shouted chants and held signs which said ‘stop grooming kids’, ‘wake up this is child abuse’ and ‘leave the kids alone’.

A spokesperson from the group at Henleaze Library said: ‘Aida works in the sex industry as an adult entertainer.

‘This is grooming and it’s illegal. So we are performing a citizens arrest, if we can’t do it today, we will.’ 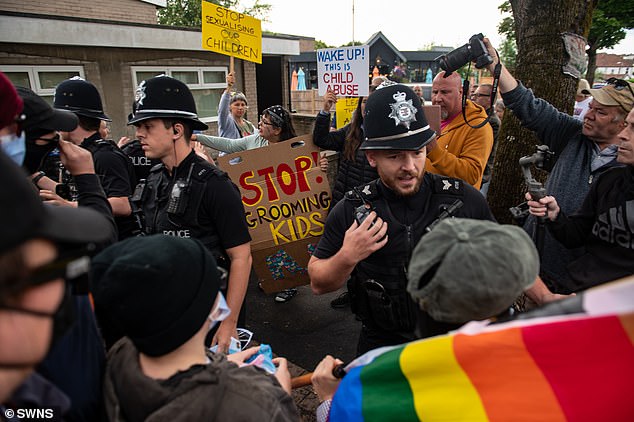 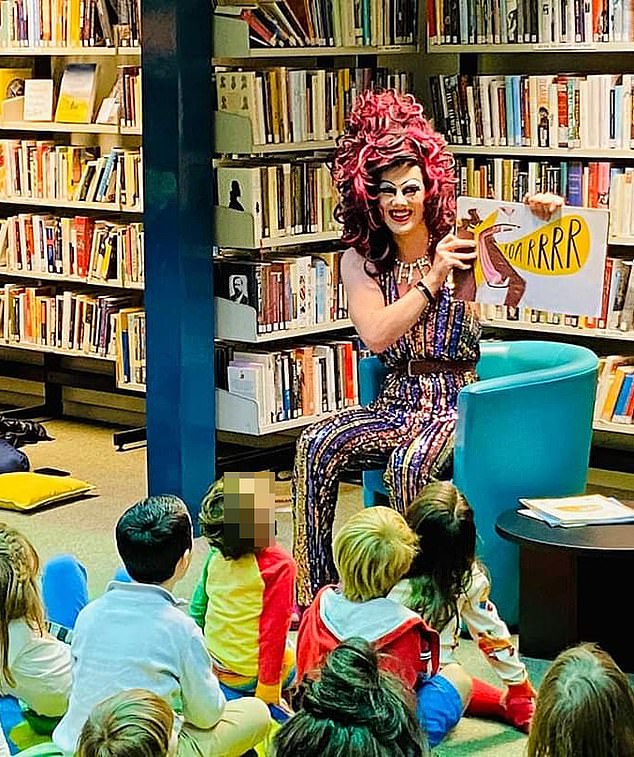 A supporter defended the children’s story time saying: ‘None of the content in the stories are sexualised. They are light-hearted and entertaining.’

The protestor, shouting from behind Pink Floyd’s ‘Another Brick in the Wall’ blaring from speakers, said: ‘If you have to normalise something that is not normal – it is not normal!

‘No one under the age of 11 needs to know explicit facts about sex and drag queens.

‘They are sex workers and we don’t want them talking to our children about what they think is normal.’

They added: ‘A library with toddlers is is not the time or the place – if you want to see a drag queen go to a nightclub!

‘These poor children are going to be confused and their young minds are being corrupted.’

One mum, 32, was one of the parents hoping to attend the storytelling event with her ten-month-old toddler.

The mother-of-one from Bristol attended one of Aida’s events six weeks ago, which she said was ‘pleasant’ and ‘lovely’.

She said: ‘Ada is an author and I can assure you none of the content in the stories are sexualised. They are light-hearted and entertaining.

‘I am annoyed and all the parents here today are annoyed.

‘I just want to have a calm conversation but I have a child strapped to me and this is turning violent, and quite frankly scary.

‘Men is make-up is not a new concept – it’s thousands of years old, this is nothing new.’

A member of the counter-protest group said they were there to stand up for ‘the rights of drag queens’.

They said: ‘It is homophobic and transphobic to stop kids being able to learn from a drag queen.

‘We are trying to not escalate things too much so the kids don’t get traumatised, we want to protect the families from the fascists over there.

‘I think a lot of this is based on unfair economic situations – trans people are often scapegoated by newspapers.

‘Lots of the fascists over there have strong ties to conspiracy theories.

‘The lies that they believe is showing in outward facing anger right now, which is something we cannot accept.’

The ‘Story Hour’ events have been running across the country for three to 11-year-old children at libraries.

The group says the sessions ‘teach inclusivity’ and encourage children to ‘get fabulous’.