Anyone for a British Indian? The word ‘curry’ is racist according to one food writer – but that’s utter nonsense says Indian chef ANJUM ANAND. It’s everything that’s right about our multi-cultural country – and here’s how to tuck in…

Throughout my childhood, the same cry would come from my mother in the kitchen: ‘What would you prefer tonight? Fish or chicken curry?’

Years later, I often find myself asking my children that very same question.

And, just as I did when my mother asked, just as anyone of Indian descent like me would, my children understand that curry is used as a blanket term to describe any South-Asian savoury dish with a sauce.

Of course, for many others the word curry is just shorthand for an Indian meal of any kind.

But one young Indian-American blogger wants it to disappear altogether. In the parlance of her generation — she’s 27 — Chaheti Bansal wants the term to be ‘cancelled’, arguing that its roots are in colonialism and it has been, in her words, ‘popularised by white people who couldn’t be bothered to learn the actual names of our dishes’.

I confess, I had to smile. For while I have often raised an eyebrow at the way the word curry is used by my non-Indian friends, I have never thought it might be racist. 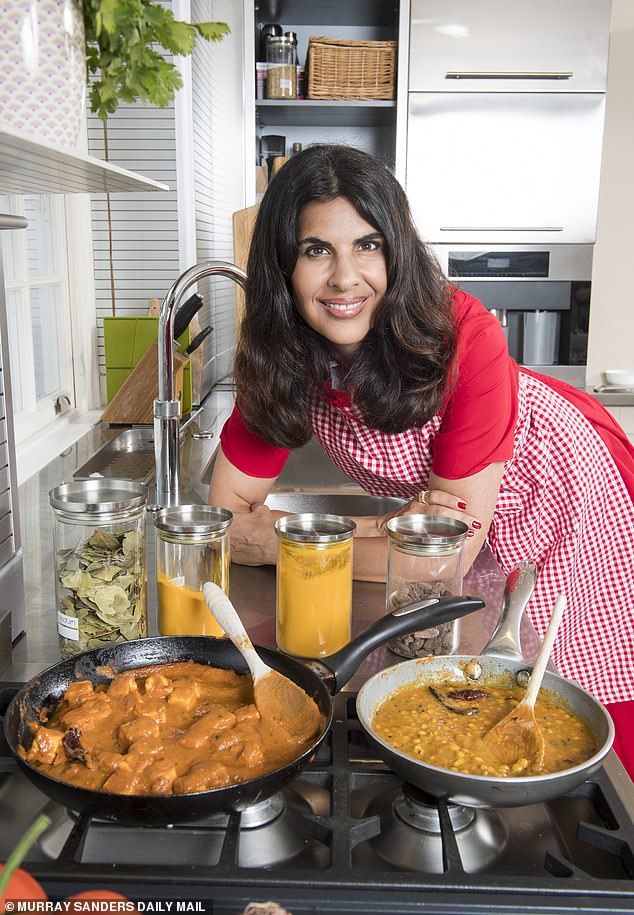 Throughout my childhood, the same cry would come from my mother in the kitchen: ‘What would you prefer tonight? Fish or chicken curry?’, writes Anjum Anand

Simplistic, yes, using the word curry as an umbrella term for the rich, regionally-variable, sophisticated and complex Indian cuisine that I love — even if they do know the names of their favourite dishes.

And, yes, supposedly it entered common parlance courtesy of British East India Company employees who adopted the Tamil word Kari — which actually means spiced — as a catch-all for Indian cuisine.

But, to be honest, even as a food writer and creator of Indian-inspired meal kits, even I don’t know all the proper names for dishes from certain regions, where the language, and the script it is written in, differs from Hindi, which I speak.

And racist? Well, as the proud British-born daughter of Indian parents, I would say quite resolutely ‘curry’ is not racist.

Whatever its provenance, I have never heard the word curry used with anything but affection. While many may not know it is a broad-brush term for a national cuisine that is far richer and more nuanced that they realise, they are simply delighted to be eating it.

I am thrilled at the way the abundant flavours of my parents’ homeland have been embraced by people from colder, drizzlier northern Europe, even if they don’t understand the subtle differences between dishes when they order a takeaway or visit their local curry house.

My parents both came to the UK in the 1960s, from the fertile plains of Punjab in Northern India, a region known as the country’s breadbasket, and the origin of many of the food and flavours we tend to think of as making up Indian food.

Tandoori chicken, naan (though this bread came from Central Asia originally), delicious tarka dal, even the flavours of a tikka masala, have all come to us from the Punjab.

That cuisine formed the backdrop to my upbringing, during which I developed my passion for cooking that would later become my career.

I have now spent more than 20 years showcasing proper Indian food and attempting to make it accessible through cookbooks, TV series and now The Spice Tailor. The brand brings authentic Indian meals and meal-kits — including, yes, curries — to those who don’t have the time or inclination to cook from scratch.

Like many first-generation immigrants, my parents were keen to serve the food of their homeland to their children to maintain the connection with their heritage.

However, curry houses were originally set up to appeal to native Brits. The first was established in 1810 in London’s Mayfair, by an ex-Army surgeon called Sake Dean Mahomed whose customers were English viceroys and governors who had picked up a love for spicy food in India.

Two centuries later, and proper Indian restaurants as well as old-school curry houses are fixtures all over the land, from small villages to High Streets everywhere. A Friday night curry, whether eat-in or takeaway, is now as big a part of the national tradition as fish and chips.

Indeed, curry is so woven into the fabric of this country that, by 2001, without a hint of irony, our then foreign secretary Robin Cook referred to chicken tikka masala as ‘a true British national dish’. That Georgian-era Mayfair restaurateur can not have imagined that when he set up his trail-blazing venture.

Of course, what we eat here in typical Indian restaurants doesn’t bear much resemblance to the food of my childhood. Many dishes are diluted with cream or nut pastes to help soften and sweeten the flavours — an expensive undertaking in India, where those ingredients were traditionally expensive. Proper Indian food is tastier and lighter.

Many of the regional dishes served in curry houses have only the loosest relationship with their origin. Take the vindaloo — a spicy pork dish originating in the southern state of Goa but which over here has become a byword for a very hot, spicy dish, with too much chilli.

Even given my own heritage, it was only when I filmed a cookery show for the BBC and made my first vindaloo, that I became aware of the many subtle and gorgeous layers of flavour in a true version of the dish.

That’s why I’ve called my own vindaloo-inspired dish Fiery Goan Curry (The Spice Tailor, £2.90), to steer away from what most understand a vindaloo to taste like.

What it boils down to is that I don’t think we should get ourselves into too much of a hot sweat about the labels we use. Fundamentally, people love what they think of as curry — the mingled flavours of Indian-inspired food along with what it represents — a delicious cuisine to be shared over the dinner table with friends, family and good cheer.

Yes, let’s try to educate people about the wonderful regional differences that lie behind the name, from the banana-leaf steamed fish of Kerala, to the tandoori dishes of the North, with its delicious yoghurt-based marinades, the steamed savoury lentil cakes of Gujarat or even the refined mustard-rich dishes of Kolkata.

Into these ‘Indian’ dishes have poured centuries of other wider cultural differences — Central Asian, Portuguese, British and even French — resulting in a wonderful melting pot of flavours and influences.

So what if not one of these dishes could correctly be called a ‘curry’? Let’s not get hung up on a word. Let’s instead educate, inform and open people’s eyes to the rich variations that Indian food can offer.

Fish or chicken curry from the kitchen? Yes please.

An authentic vindaloo has a fair amount of chillies — but these are not its defining flavour — and has a light liquor rather than thick sauce. This combination of spices, vinegar, ginger and garlic works well with the richness of pork.

For the spice mix

For the spice mix, using a grinder, make them into a fine powder. Using a blender, make a paste of the ginger, garlic and vinegar.

Add this to the pork along with the spices and salt and put it in the fridge to marinate for a few hours.

Heat 4 tbsp of the oil in a non-stick saucepan. Add the onion and fry until golden brown.

Add pork and marinade and brown gently, over a moderate heat for 6-7 minutes.

Turn the heat to a low setting, cook until the pork is tender, around 45-50 minutes, checking every so often and adding a splash of water from the kettle when the pot looks like it’s running dry, so that it stews, as much as possible, in its own juices.

Once the pork is tender, taste, adjust seasoning and serve.

Some people like to add a little sugar to their vindaloo — but it’s really for you to decide. 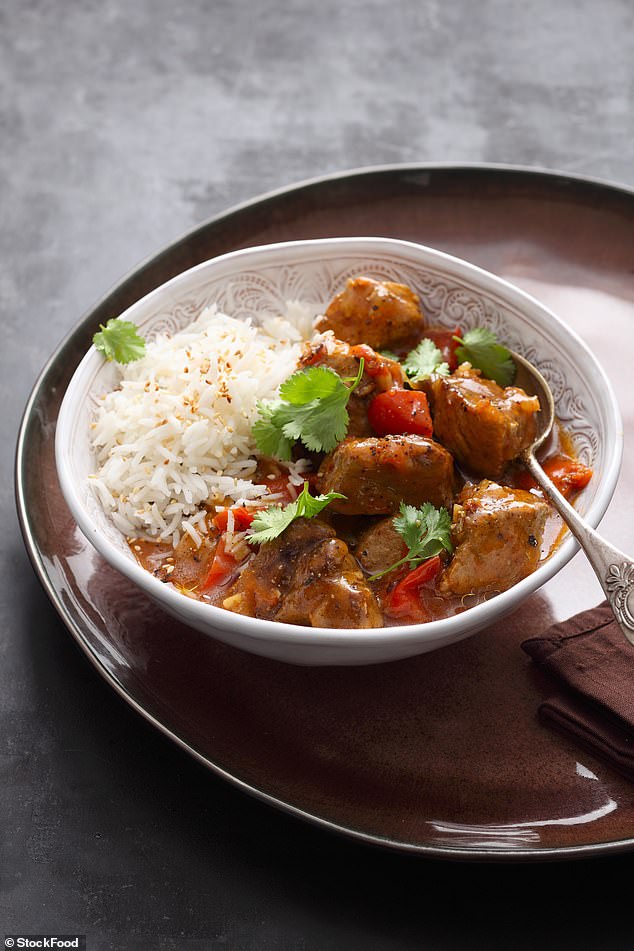 This dish is supposed to have been born when a customer wanted sauce with his tandoori chicken tikka, but its roots lie in Indian favourite, butter chicken.

The velvety, rich, tomato-based curry does have a few steps but you can skip grilling the chicken in the tandoori marinade, and not pass it through a sieve (pick out the spices, though). 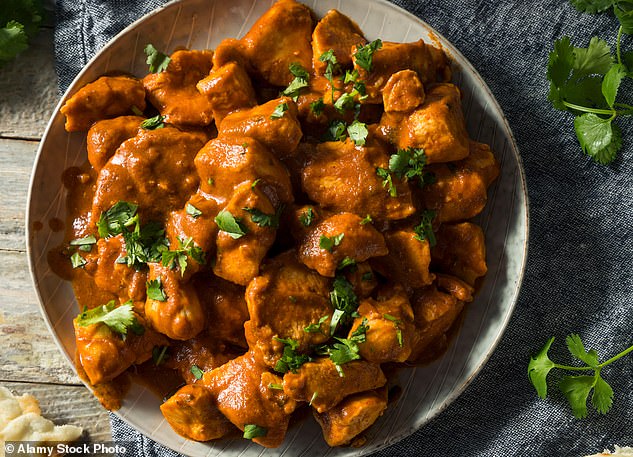 Mix together all the marinade ingredients with 1 tsp of salt. Add the chicken and marinate overnight in the fridge.

Blend the garlic and ginger, using a little water.

Heat the oil and half the butter in a large non-stick pan and add the whole spices, onion and seasoning and cook until soft and browned on the edges. Add the garlic and ginger and cook until the moisture has evaporated.

Add the tomatoes, tomato puree and cook down until the resulting paste releases oil, around 20 minutes.

Then turn down the heat and ‘brown’ the paste, stirring often, until it darkens, around 6-8 minutes.

Add 250ml water, bring to the boil, then pass through a sieve. Discard the solids. Keep the sauce to one side.

Heat the grill to 240c. Place the chicken thighs and marinade on a foil-lined baking tray and cook for 8 minutes or until charred.

Remove from the heat and reserve the juices. Cut the thighs into pieces.

Heat the remaining butter and add the green chillies, sauce, a splash of water, chicken and its juices, chilli powder, paprika, garam masala, sugar and seasoning. Simmer, stirring until the chicken is cooked through.

Take off the heat, stir in the cream and serve.