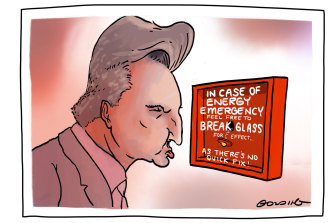 While I struggle to find much sympathy for women who define themselves by their massive lips and Kardashian-influenced buttocks (The Age, 10/6), I believe these cosmetic surgeons should be banned for life for their appalling lack of qualifications, skill and care.

No doubt making profits and gaining fame on social media are top of these doctors’ agenda. It is 2022 and it seems women’s self worth and belief is no closer to ideal than in the 1960s. Why oh why are we trying to look so hideously fake and artificial?
Paula Truefeldt, Rye

The best of journalism

We would like to think that the governments we elect would protect us against questionable operators such as some cosmetic surgeons. Instead we have to rely on The Age and, in particular, Adele Ferguson. Thank you 60 Minutes, The Age, Adele and also Joel Tozer.
John Meaney, Frankston South

In denial of COVID risk

I agree that our government has stepped back and it is left to us to protect ourselves from COVID-19 (Letters, 10/6). Given the death rate in the elderly, it distresses me to see most of this group not wearing masks when I shop for my mother in Mount Martha. It seems it is not only younger people who have accepted infection. Maybe some of the elderly are in denial about the risks of the disease.
Linda Skinner, Mooroolbark

Regarding the letter about the high-speed train from Madrid to Barcelona (Sunday Age, 5/6). Taken at face value, a comparison can be made to the proposed Sydney to Melbourne link. The distance and populations of the terminal cities, technical abilities and economies, and mountains are all similar.

However, Spain has about 10 cities with populations of more than half a million people in the area. Australia has none, but there are a few with more than 200,000 people. Spain also has surrounding countries with large populations.

Spain’s high-speed rail was heavily subsidised by Spain and the European Union yet it still runs at a loss. A high-speed rail in Australia would be great. I do not think that it will be viable this century.
Cliff Strahan, Greensborough

Give back a little, Will

So Prince William sold The Big Issue on a London street, supposedly to raise funds to help the homeless (The Age, 10/6). For the prince, it is a photo opportunity to raise his profile. If he has any serious intent, he could easily donate a few million pounds from his large, inherited fortune and/or give the homeless a property or two from his real estate portfolio.
Meg Paul, Camberwell

It is good that frontline workers in Victoria’s public hospitals and the ambulance service will receive $3000 bonuses (The Age, 10/6).

Unfortunately, aged care workers who have worked incredibly hard to protect and care for our elderly throughout the pandemic will once again miss out.
I urge the state government to extend this bonus to workers in our important aged care facilities.
Robert Van Zetten, Brighton

We are all taxpayers. Why is Daniel Andrews not extending the $3000 bonus to hospital personnel working in the private system? We should not be working in a “them and us” scenario.
Pam Swirski, Berwick

Power of the industry

Can one of the first tasks of the federal ICAC (Independent Commission Against Corruption) be to see how the fossil fuel industry has influenced government policy over so many years? Please.
Jeff Moran, Bacchus Marsh

Letters from Joan Schoch (10/6) and others remind us of the needs of so many refugees and asylum seekers. Some have helped keep our economy going, working in essential jobs during the pandemic. Others have barely survived and been totally dependent on charity.

Their claims need to be assessed quickly and humanely. They have waited in limbo for far too long.
The government’s election promise to convert many temporary visas to permanency needs action, as does the clarification of the status of those awaiting assessment and those in community detention.

The endless delays in this overloaded system add to the emotional distress of those who are waiting for their future to be determined. It is time to act.
Sue Wragg, Williamstown

What’s not to love?

As usual, I enjoyed another one of Tony Wright’s commonsense articles – ’Millions of reasons for PM to live at The Lodge” (The Age, 11/6). His statement, “most Canberrans are everyday people living suburban lives, worrying about their mortgages and holding backyard barbecues during the warmer months” resonated with me.

I lived in Canberra for more than 20 years and was asked so often – by people who had never been there – why I lived there as if it were crawling with politicians.

I found it to be the prettiest and most convenient city in which to live because it had been planned, and that certainly makes all the difference. In all that time, I saw only one politician and he was doing a solitary shop at one of Canberra’s weekend markets.
Ailene Strudwick, Mornington

Is the price of lettuce just the tip of the iceberg?
Wayne Holloway, Highton

Gay Alcorn sends an exclusive newsletter to subscribers each week. Sign up to receive her Note from the Editor.