Beijing: In Shanghai, restaurants and bars are teeming with crowds. In Beijing, thousands of students are heading back to campus for the new semester. In Wuhan, where the coronavirus emerged eight months ago, water parks and night markets are buzzing.

While much of the world is still struggling to contain the coronavirus pandemic, life in many parts of China has returned to normal. Cities have relaxed social distancing rules and mask mandates, and crowds are again filling tourist sites, cinemas and gyms. 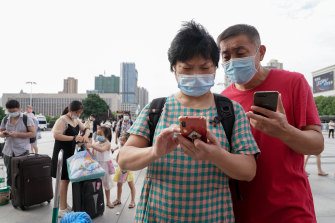 "It no longer feels like there is something too frightful or too life-threatening out there," said Xiong Xiaoyan, who works at a paint manufacturer in the southern province of Guangdong.

Xiong, who described the restrictions put in place to combat the virus as "suffocating," recently visited a cinema for the first time since the outbreak

"When the lights turned dark, I felt I had returned to my normal life," she said. "I could forget about everything outside and have my own spiritual world."

These scenes stand in stark contrast to the early days of the pandemic when China was its centre and the government imposed sweeping lockdowns. 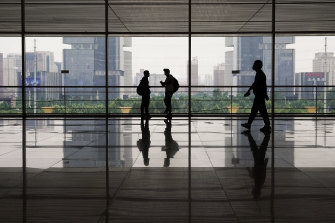 Passengers head to their trains at the station in Shanghai.Credit:Getty Images

Now, after months of travel restrictions and citywide testing drives, locally transmitted cases of the virus in China are near zero, according to official data. On Sunday, China reported no new locally transmitted cases for the seventh consecutive day. The 12 new infections it reported were all imported, bringing China's total number of confirmed cases to 84,951, with at least 4634 deaths.

Many Chinese cities are once again hosting large events, though with some limits on crowd sizes, after months when such gatherings were banned entirely.

Qingdao, a seaside city in eastern China, is holding its popular beer festival this month largely as planned (face masks are optional). Shanghai recently held a gaming convention that attracted thousands of enthusiasts. 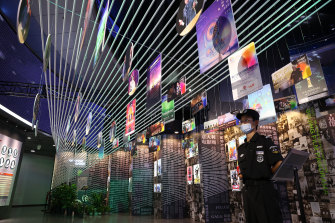 Many people are resuming old routines, with some modifications, hopeful that the worst has passed.

In Xi'an, a city in north-western China, Jing Mingzhu, who works in the food service industry, recently started travelling and going to the gym again. During a recent trip to southern China, she said, she realised the importance of feeling "free and relaxed."

"I took travel for granted," Jing said. "After it was taken away, I felt I should cherish it."

China's leaders, hoping to stimulate the economy, are eager for people to get back to work and start shopping and travelling again.

But they are also taking a cautious approach, requiring cinemas and tourist sites, for example, to operate at half capacity. To get into banks, restaurants and other public venues, residents must submit to temperature checks and show digital codes verifying that they are healthy and have not travelled recently to high-risk areas.

Authorities continue to restrict travel in the Xinjiang region in western China, where an outbreak last month prompted a lockdown. China still prohibits most foreigners from entering the country, for fear that they could bring the virus.

While China is not the only place where restrictions have eased – Taiwan, for example, has kept the virus under control for months – the return of some normalcy has become a point of national pride and fodder for the country's vast propaganda apparatus.

The state news media is pointing to the return of large gatherings and classes as evidence of China's superior response to the virus, especially compared with the United States and other Western countries.