Mogadishu: At least 100 people were killed and 300 injured in two car bombs that exploded outside the education ministry in Somalia’s capital Mogadishu, the country’s president said.

“Our people who were massacred … included mothers with their children in their arms, fathers who had medical conditions, students who were sent to study, businessmen who were struggling with the lives of their families,” President Hassan Sheikh Mohamud said after visiting the site of blast. 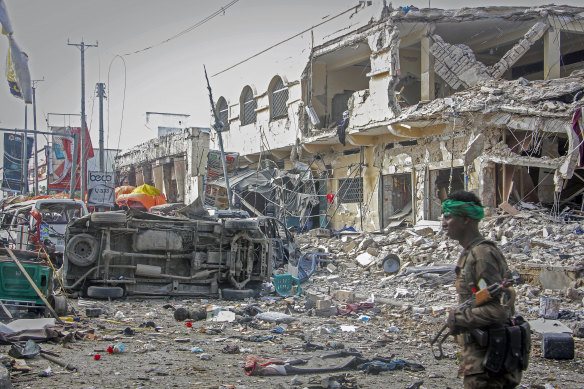 A Somali soldier walks through the scene of a double car-bomb attack in Mogadishu, Somalia.Credit:AP

The first of the explosions hit the education ministry near a busy junction in Mogadishu. The second occurred as ambulances arrived and people gathered to help the victims.

The blast wave smashed windows in the vicinity. Blood covered the tarmac just outside the building.

The attack occurred on a day when the president, prime minister and other senior officials were meeting to discuss expanded efforts to combat violent extremism, especially by the al-Qaeda-affiliated al-Shabab group that often targets the capital. 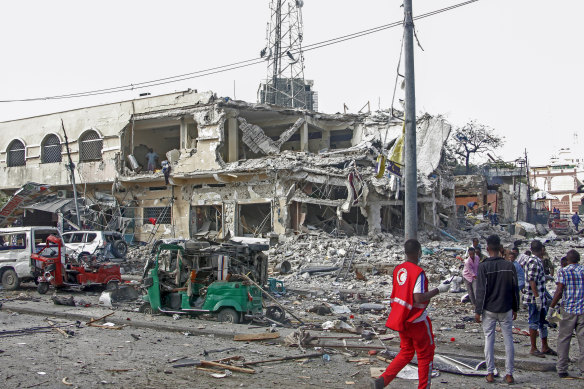 The explosions at a busy junction near key government offices left scores of civilian casualties.Credit:AP

It also took place at the same place as Somalia’s largest bombing, which killed more than 500, in the same month in 2017. In that blast, a truck bomb exploded outside a busy hotel at the K5 intersection, which is lined with government offices, restaurants and kiosks.

Mohamud said the number of victims could rise. He had instructed the government to provide immediate medical assistance to the injured, some of whom were in serious condition.

A volunteer at the Medina hospital, Hassan Osman, said the majority of the dead were women. At the hospital and elsewhere, frantic relatives peeked under plastic sheeting and into body bags, looking for loved ones.

The Aamin ambulance service said they had collected dozens of wounded. One ambulance responding to the first attack was destroyed by the second blast, director Abdulkadir Adan added in a tweet. 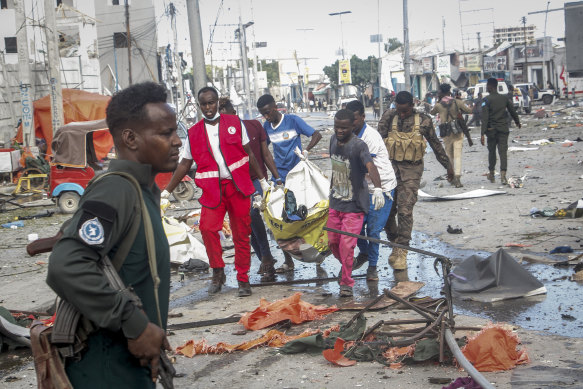 Rescuers remove a body from the scene of the bomb attack in Mogadishu.Credit:AP

“I was 100 metres away when the second blast occurred,” witness Abdirazak Hassan said. “I couldn’t count the bodies on the ground due to the [number of] fatalities.” He said the first blast hit the perimeter wall of the education ministry, where street vendors and money changers were located.

An Associated Press journalist at the scene said the second blast occurred in front of a busy restaurant during lunchtime. The blasts demolished tuk-tuks and other vehicles in an area of many restaurants and hotels. He saw “many” bodies and said they appeared to be civilians travelling on public transport.

The Somali Journalists Syndicate, citing colleagues and police, said one journalist was killed and two others wounded by the second blast while rushing to the scene of the first.

Somalia’s government has been engaged in a high-profile new offensive against the extremist group that the United States has described as one of al-Qaeda’s deadliest organisations. The president has described it as “total war” against the extremists, who control large parts of central and southern Somalia and have been the target of scores of US airstrikes in recent years.

The extremists have responded by killing prominent clan leaders in an apparent effort to dissuade support for that government offensive.

On Saturday, Prime Minister Hamza Abdi Barre said the attack would not dampen the public uprising against al-Shabab, and he and the president expressed the government’s determination to wipe out the extremist group.