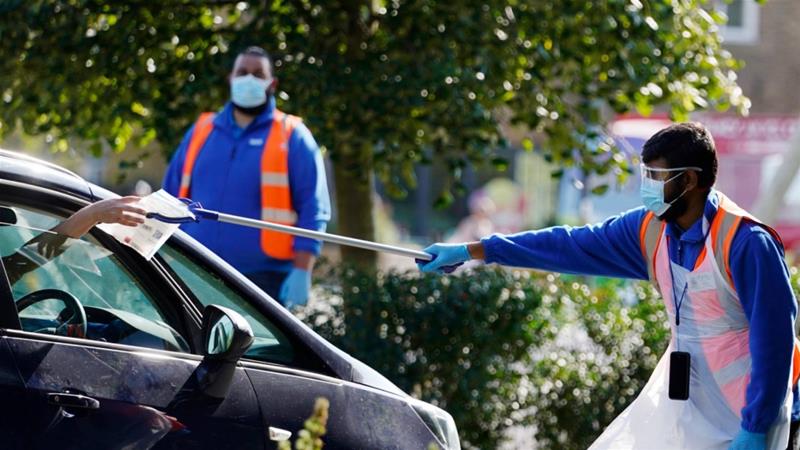 The UK government on Tuesday tightened restrictions to stem a rising tide of coronavirus cases, ordering pubs in England to shut early and abandoning calls for people to return to the workplace to help kick-start the battered economy.

He told Parliament the UK was at a “perilous turning point” and had to act now.

“I want to stress that this is by no means a return to the full lockdown of March,” he said, but added: “This is the moment we must act … We’re acting on the principle that a stitch in time, saves nine.”

Johnson said the measures, which could be in place for up to six months, would be bolstered by greater penalties for infringements, a boosted police presence and military back-up.

“If all our actions fail to bring the R (reproduction rate) below one, then we reserve the right to deploy greater firepower with significantly greater restrictions,” he added.

“Your harmless cough can be someone else’s death knell.”

Government scientists have painted a grim picture of up to 50,000 coronavirus cases a day by mid-October and more than 200 deaths a day a month later if no action is taken.

Johnson, battling sustained criticism for his handling of the outbreak, brushed aside renewed anger from the hospitality sector, which is still trying to get back on its feet.

Pubs, bars and restaurants will have to close early at 10:00pm local time (21:00 GMT) from Thursday, while face coverings will be made compulsory for staff in retail, as well as in taxis.

From Monday, weddings and receptions will only be allowed a maximum of 15 people, although funerals can still have up to 30 in attendance.

But Johnson’s call for people to work from home again wherever possible comes just months after the government encouraged the opposite.

He also called for a halt to the planned phased return of fans to live sporting events in the UK from October 1, despite huge losses and fears some clubs could go under.

In the latest sign of the fallout of the coronavirus closure, UK leisure group Whitbread announced it could shed up to 6,000 jobs at its hotel and restaurant chains.

Pub chain Wetherspoons also said 1,000 of its staff at UK airports had been warned that up to 450 jobs were at risk.

Almost 42,000 people who tested positive for COVID-19 have died in the UK – the worst death toll in Europe.

Another 4,368 positive cases were recorded on Monday in levels not seen since early May when the country was still subject to a nationwide stay-at-home order.

As ministers warned of a “tipping point”, the COVID-19 alert level was raised from level three to four, indicating that rates of transmission were now “high or rising exponentially”.

Johnson said some 13 million people were already under local restrictions in swaths of northern and central England that have recorded high numbers of cases.

Concerns have been raised that shutting pubs early could lead to unregulated events and house parties where the virus could spread easily, particularly among young people.