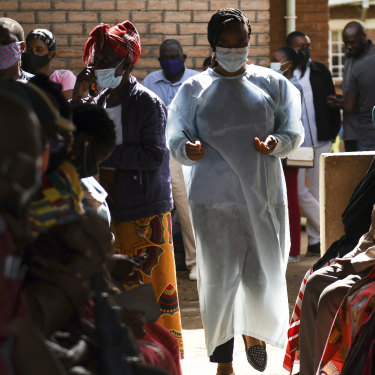 Numbers are handed out to people waiting to receive the AstraZeneca COVID-19 vaccine at Ndirande Health Centre in Blantyre Malawi.Credit:AP

Australia is among a group of rich countries accused of standing in the way of some of the world’s poorest, which are seeking to free up the manufacture of COVID-19 vaccines at a meeting of World Trade Organisation member states on Friday.

Backed by more than 115 other countries, India and South Africa will appeal for patents to be temporarily waived on COVID vaccines and technology until global herd immunity is achieved.

The fight for patent waivers is an uncomfortable collision of commercial and trade interests with human rights concerns as the world races to get the pandemic under control before new strains of COVID-19 emerge that are resistant to the current suite of vaccines. 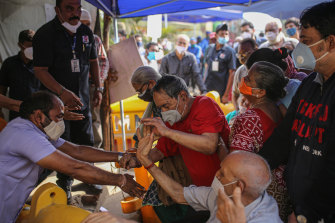 Elderly people struggle in a queue at an entry gate of a Covid-19 vaccination centre in Mumbai.Credit:Bloomberg

But the proposal, which was first put last October and is now co-sponsored by 58 countries and supported by 60 more, has been opposed outright or delayed by some of the world’s largest economies including the European Union and the United States.

The Australian government has denied it is blocking the proposed pause on intellectual property rules, and Labor has not opposed the Commonwealth’s position.

Pharmaceutical companies and some governments say a patent waiver would deter them from investing in vaccine development for future pandemics, and have raised concerns it would allow Russia and China to gain access to new Western technology.

Russia’s position on the proposal is unclear. China told the WTO in November that it supported a temporary waiver on patent rules but was concerned about the impact on its own pharmaceutical companies, which have developed five different vaccines.

Access to vaccines has been uneven globally. High-income countries, including Australia, have bought 4.7 billion doses compared with 770 million doses purchased by low-income countries. Africa, whose 1.3 billion people represent 16 per cent of the world’s population, has received less than 2 per cent of the COVID-19 vaccine doses administered around the world, according to the World Health Organisation, which supports the push for a patent waiver.

An Oxfam survey of 77 epidemiologists from 28 countries showed two-thirds believed the world had less than a year before mutations rendered the majority of first-generation vaccines ineffective. 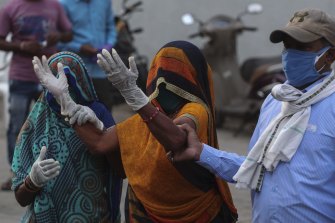 A relative of a patient who died of COVID-19 mourns outside a hospital in Ahmedabad in India on Tuesday.Credit:AP

At the current rate of vaccination, it’s estimated it would take until 2023 or 2024 for the world’s eight billion people to be vaccinated.

India’s Deputy High Commissioner to Australia, Palaniswamy Subramanyan Karthigeyan, told The Age and The Sydney Morning Herald his country – which recorded 360,960 new cases on Wednesday – had no time to waste.

“Given the situation we find ourselves in, time is of the greatest essence and an effective response to the pandemic requires other countries to make these products accessible, to make it equitable, to make it affordable.”

More than 700 Australian medical officials and academics have now signed a letter – supported by Medecins Sans Frontieres and the Public Health Association of Australia – calling on the federal government to throw its support and influence behind the intellectual property waiver.

They argue that AstraZeneca’s licensing and technology transfer to Australia has enabled local production. Other countries, they say, don’t have the same negotiating power and have been prohibited from manufacturing COVID-19 vaccines and medical tools even when they have the capacity.

Professor Deborah Gleeson, from the Public Health Association of Australia, said scarcity of vaccines could only be resolved by diversifying supply.

“Health professionals across the country are urging the Australian government, which is one of a small group of governments opposing the patent waiver, to stand on the right side of history,” she said.

“To end the pandemic everywhere, we need a global vaccination plan that includes increasing manufacturing capacity,” he said on Wednesday.

Aurelie Godard is an intensive care doctor with Medecins Sans Frontieres, working in a 53-bed COVID-19 unit in Baghdad. In a gruelling statement, she described how she is forced to choose who will live and who will die.

“There are always at least six people waiting who need a bed and I have nowhere else to send them, and so you are forced to choose. It’s not a nice word, but that’s what we are doing,” Dr Godard said. She described the situation facing countries with limited access to vaccines as “revolting”. 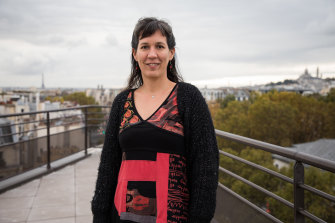 Intensive care doctor Aurelie Godard has been forced to choose which of her patients have the best chance to survive at her overwhelmed hospital.

“It is really dramatic and the people dying now are those who we could have prevented from dying with vaccination. So, it is even more revolting to see young people dying of something that should have been at least partially controlled by vaccination.”

A Department of Foreign Affairs and Trade spokeswoman said Australia had worked with its regional partners to enhance the global supply of safe and effective COVID-19 vaccines, including by directing $61 million to the World Health Organisation’s COVAX facility, a global alliance that pays for and distributes vaccines to poor nations.

So far COVAX has delivered about 40 million doses to 100 countries, two-thirds of them in low-income countries eligible for donor-funded doses. Australia has also supplied vaccines to Papua New Guinea and East Timor.

Australia argued in informal talks at the Trade-Related Aspects of Intellectual Property Rights council last week that the common law implications raised by an international patent waiver should be explored before it could enter into negotiations in support of the waiver. MSF’s Australian program director, Simon Eccleshall, told The Age and The Sydney Morning Herald this amounted to Australia delaying the push for waivers.

“They are actively seeking to identify barriers and obstacles, bureaucratic obstacles, to slow the process so they could say, ‘We’re not blocking this’, but it’s very evident that they’re doing everything within their power to slow the decision-making,” he said.

MSF estimated on Wednesday that 118 WTO countries had either co-sponsored or supported the proposal, representing about 74 per cent of member states. If the states are successful in reaching consensus on Friday, the proposal would then proceed to the full council of the World Trade Organisation for consideration. 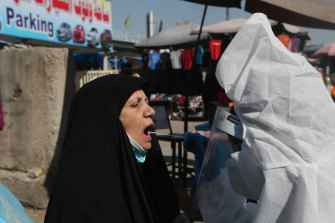 A woman is tested for COVID in Baghdad in February. The nation is still enduring repeated coronavirus outbreaks. Credit:AP

A spokeswoman for AstraZeneca, which is selling its vaccine at cost, said the intellectual protection for its COVID-19 vaccine would continue to be owned by Oxford University, which is licensing it exclusively to the company.

“AstraZeneca believes that open licenses have the potential to actually damage the vaccine, as we would lose control of safety and quality standards for vaccine manufacturing, which are of paramount importance,” she said.

“AstraZeneca has built a global supply network adhering to the highest quality and safety standards with a capacity of billions of doses, the majority of which will be directed to low and middle-income countries, providing broad and equitable access at no profit during the pandemic.”

Last October, US biotech Moderna told investors it would not attempt to enforce its patents during the pandemic against any company making vaccines intended to fight COVID-19. 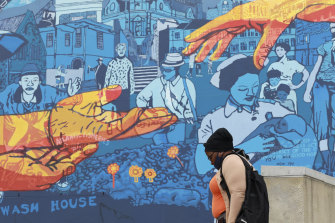 Opposition trade spokeswoman Madeleine King said the onus was on the Commonwealth to actively work with the WTO and other countries to boost access to vaccines.

A waiver on intellectual property rights was one proposal, she said, but other measures including using Article 31 of the Trade-Related Aspects of Intellectual Property Rights agreement were also worth exploring. That would allow WTO members, subject to certain criteria, to license vaccine production to third parties without express permission of the patent holder.

“More needs to be done by the international community, including the Morrison government, to ensure all countries have access to safe and effective COVID-19 vaccines,” she said.

Human Rights Watch European media director Andrew Stroehlein described the behaviour of countries like Australia as “throttling vaccine production globally” and “a scandal that affects us all”.

“Universal vaccine coverage is not just a moral responsibility, it is the only realistic means for ending virus transmissions,” she said.

“It is not in the interest of any community, state or for the world at large to have people falling through the cracks, exposed and unprotected.

“While many states have adopted vaccination strategies that include refugees on an equal par to nationals, it is the low and middle-income countries – that host 85 per cent of the world’s refugees – where immunisation remains a challenge, largely owing to the unequal availability of vaccines and fragile national health systems.”