The 300-mile storm has brought a thick haze to landmarks such as the Sydney Opera House, while the city’s 309m (1,014ft) tower has been barely visible at times.

Some flights at the city’s main airport were delayed.

The storm is caused by strong winds picking up dry soil in a country where many parts have been suffering from drought.

Adam Morgan of the Bureau of Meteorology said a low pressure system over the states of South Australia and Victoria had pushed strong winds across areas of western New South Wales that have experienced one of the worst drought seasons in years.

“This is the typical time of year for dust storms through inland Australia, but it is quite rare for dust to reach the east coast,” he said.

Health officials warned people with respiratory or cardiovascular conditions against spending too long outside during the storm.

NSW Ambulance assistant commissioner Tony Gately told The Sydney Morning Herald: “So far today we have responded to around 90 cases of asthma or breathing difficulties right across Sydney, which is a significant peak.”

Mr Gately said the state’s ambulance service was receiving around eight calls an hour from people with breathing problems. 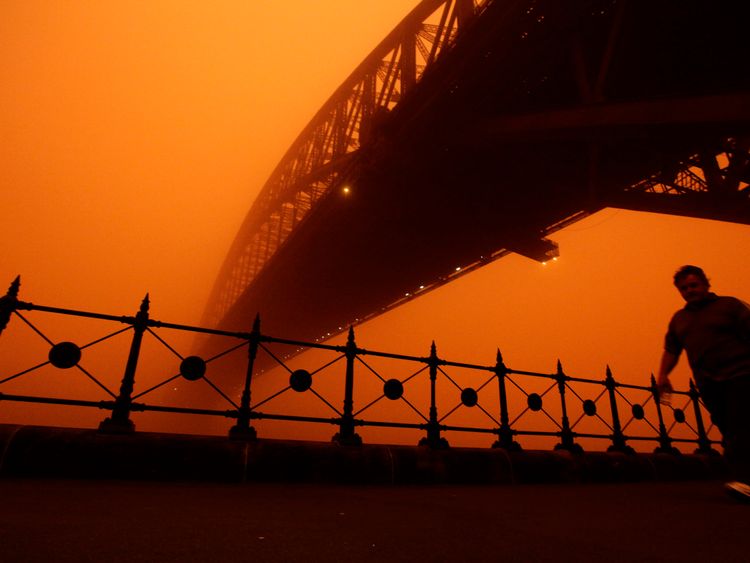 He added: “Conditions like asthma can be deadly and to take risks in the current conditions would be very ill-advised.”

By late Thursday local time, the dust seemed to be easing but haze was still visible over parts of northeastern New South Wales and southern Queensland.

People were told that there could still be a risk to people’s health through Friday, however.

Australia’s worst dust storm in recent years was in September 2009, when the dust stretched 310 miles wide and 620 miles long.

Dozens of towns and cities were covered in New South Wales and Queensland but there were no fatalities recorded.

Some of the dust even reached New Zealand, where such storms are very rare.