CARACAS (Reuters) – Andrea Pacheco, a 30-year-old social activist, did not join mass protests in 2017 aimed at ousting Venezuelan President Nicolas Maduro. Pacheco, a supporter of the ruling Chavismo movement since she was young, still had not completely lost faith. 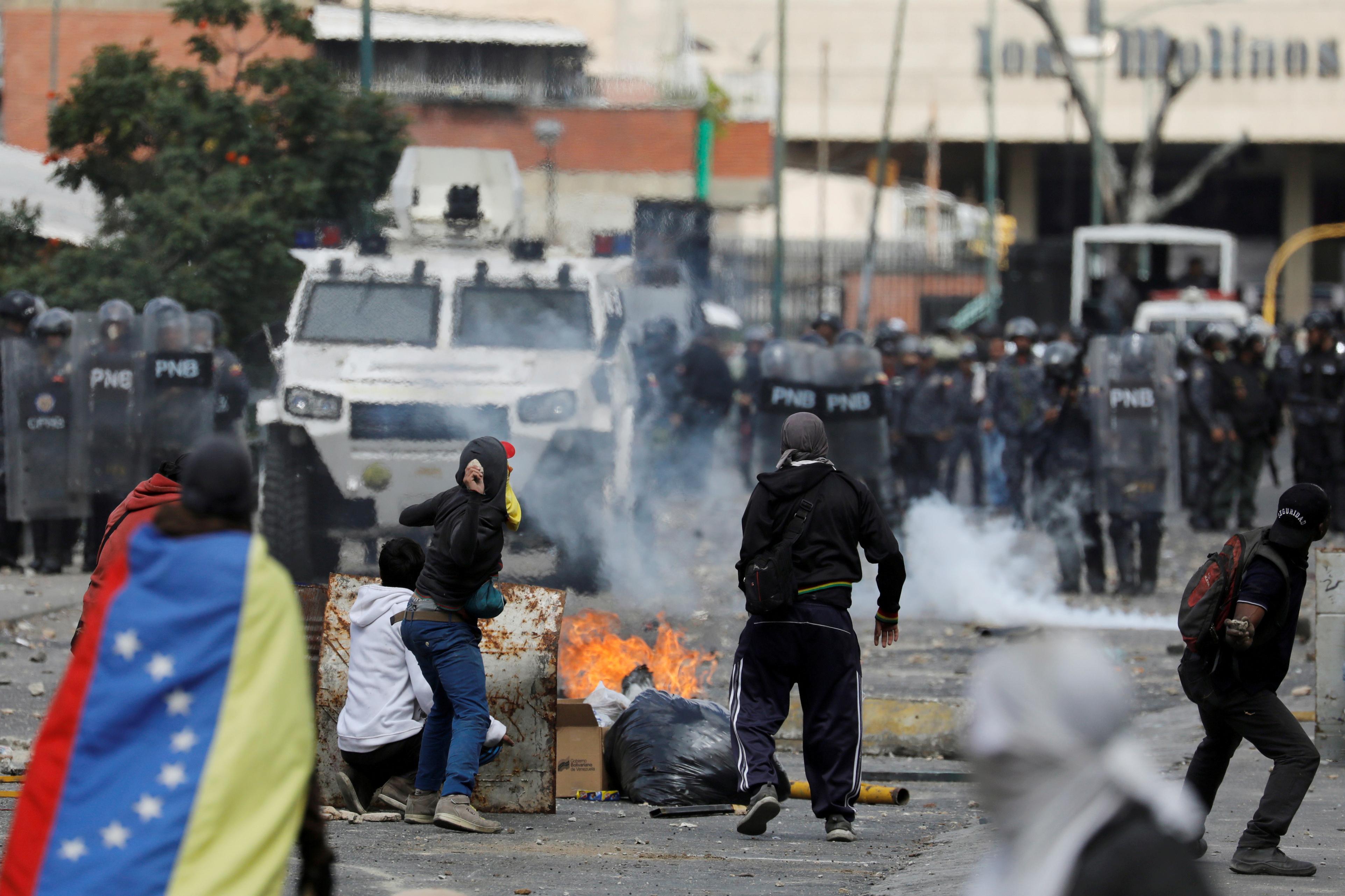 On Wednesday, she took to the streets for the first time to march against the successor of the late Hugo Chavez. The economy’s accelerating collapse, rampant corruption, and Maduro’s broken promises of a recovery convinced her, she said.

“Until the day before, I had my doubts. It was hard for me to go to the march,” said Pacheco. “But Maduro hasn’t even recognized his mistakes, he’s done nothing.”

She was joined by hundreds of thousands of others, many newcomers like her, inspired by a new opposition leader, Juan Guaido, who has proclaimed himself interim president and denounces Maduro as an illegitimate usurper.

The United States and most Latin American nations have recognized Guaido as head of state, though he has no control over the state’s functions, which remain loyal to Maduro.

While the 2017 demonstrations failed and left the opposition in disarray, a dozen people who protested on Wednesday told Reuters of a renewed confidence in dislodging Maduro, who became president five years ago and has presided over a halving of Venezuela’s economy.

Pacheco, the daughter of Peruvian immigrants, said Chavez was the first politician to make her feel “included” in Venezuelan society. President from 1999 until his death in 2013, Chavez used oil income to fund social programs and attack entrenched inequality and poverty.

Pacheco said she joined political groups and started writing for Aporrea, a leftist website set up to defend Chavez. But as the oil revenues dried up and Venezuela’s economy spiraled into recession and hyperinflation, her support for his successor began to waver.

During the 2017 protests, the opposition’s radicalism and hatred of “chavistas” kept her away, she said. No longer.

“Now there is great unity in rejecting Maduro,” she said.

The 35-year-old Guaido seeks to lead an interim government that would call free elections. Maduro accuses him of staging a coup.

Wednesday’s protest was the first major anti-Maduro march since 2017, when 125 people died during months of clashes with riot police. The opposition spent 2018 riven with infighting and marches in Caracas attracted at most a few thousand people.

Enaim Trejo, a 21-year-old student, was one of those demoralized by the opposition’s inability to agree on a strategy. She said she spent last year focused on her studies, with her free time dedicated to searching for scarce food and medicine for her family.

On Wednesday, she returned to the streets, though it was not without cost.

After riot police charged the crowd in Caracas’ Altamira plaza, firing rubber bullets and tear gas canisters, she said an officer wrestled her to the ground and stole her mobile phone.

“For the freedom of our country, I can’t stand Maduro any more. We suffer too much,” she said, minutes later, in tears.

Unlike previous protests, which drew a mainly middle-class crowd, Wednesday’s march attracted Venezuelans from all walks of life. On Monday, a brief military revolt sparked protests in lower income neighborhoods that used to be a stronghold of government support.

“We’re tired of the same shit, living off a CLAP box. It’s not possible, your wage isn’t enough,” said a protester on Wednesday, a mask covering his face and his hands clasping chunks of concrete. He declined to give his name.

At a pro-Maduro march in Caracas on Wednesday, organizers handed out packages of food – a croissant, some juice and an orange – to several thousand attendees, many of them state employees wearing red shirts emblazoned with their departments’ name. Several people in attendance said Guaido presented no viable alternative to Maduro and expressed worries of U.S. meddling.

Opposition organizers say they want to avoid the violence that characterized the 2017 protests, although some demonstrators on Wednesday lobbed projectiles and burned vehicles. Local rights groups say 14 people have been killed so far this week across the country. 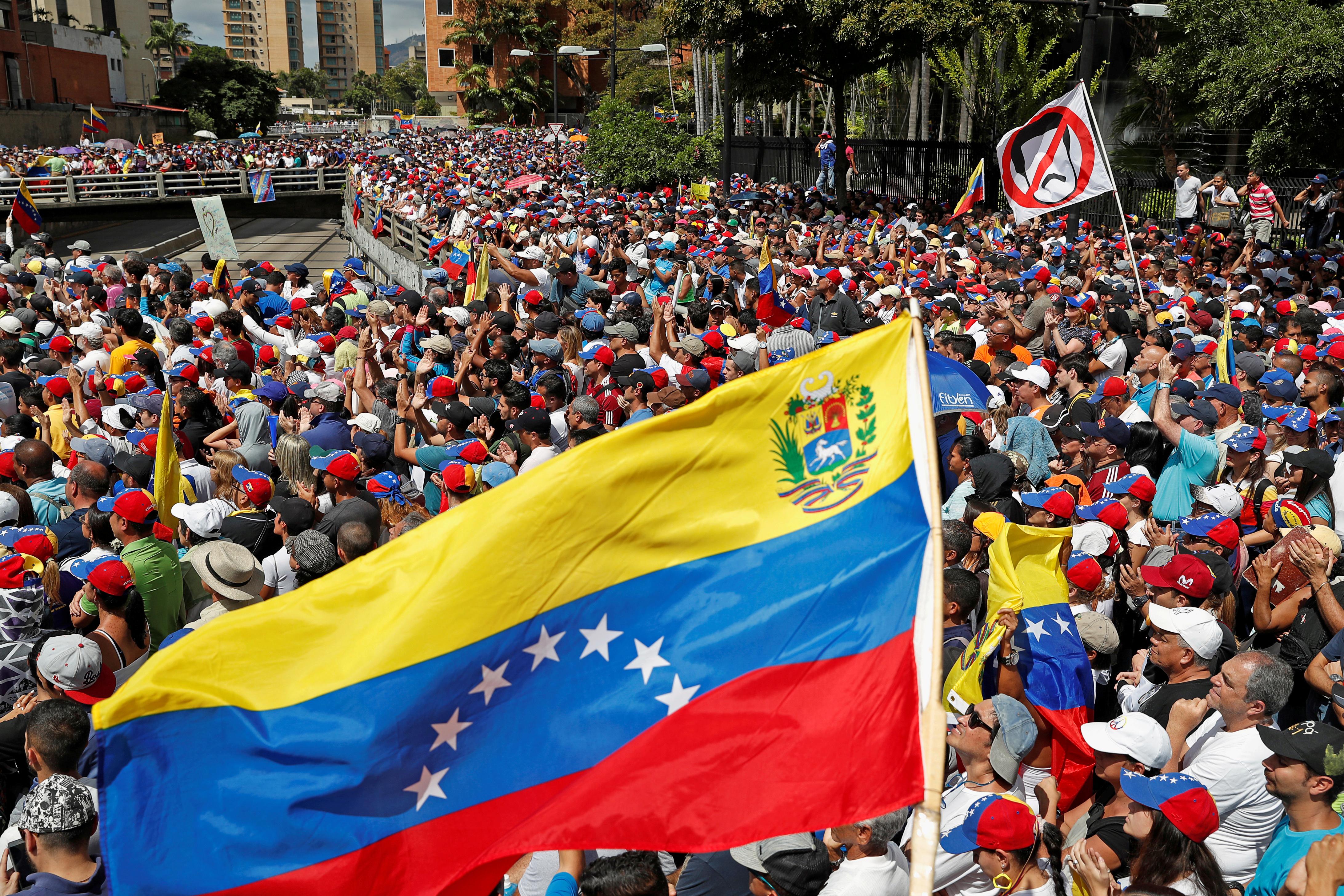 Fighting with police allows Maduro to crack down and tar protesters as trouble-makers, organizers said, adding that violence deters older people and families from attending.

At one point during the protest on Altamira plaza, a crowd walked towards a group of police officers on motorbikes, their arms outstretched, chanting “Freedom,” until they were face-to-face. The police withdrew and the crowd celebrated.