A BAGPIPER has admitted he provoked a cop into apparently pushing him over during a stand-off near the Cenotaph on Remembrance Sunday.

The confrontation happened on the outskirts of the Cenotaph in Whitehall, Central London after the Remembrance Sunday ceremony yesterday morning. 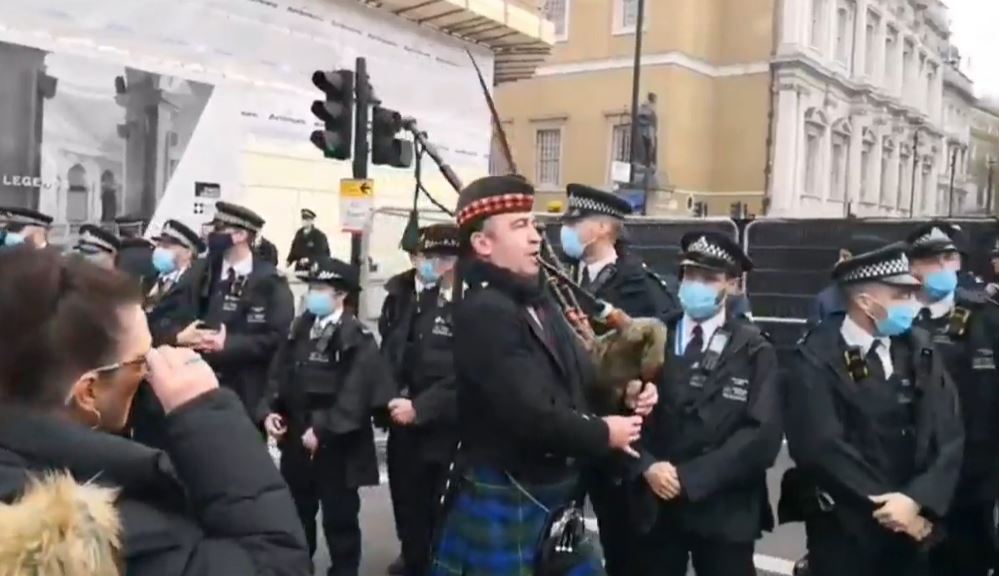 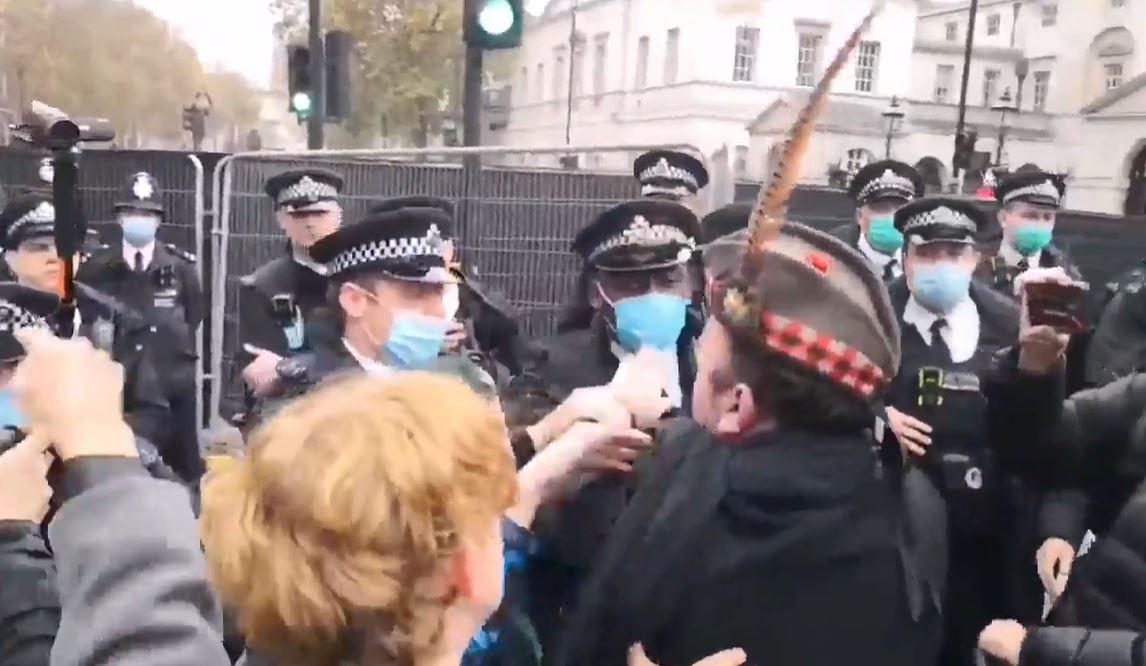 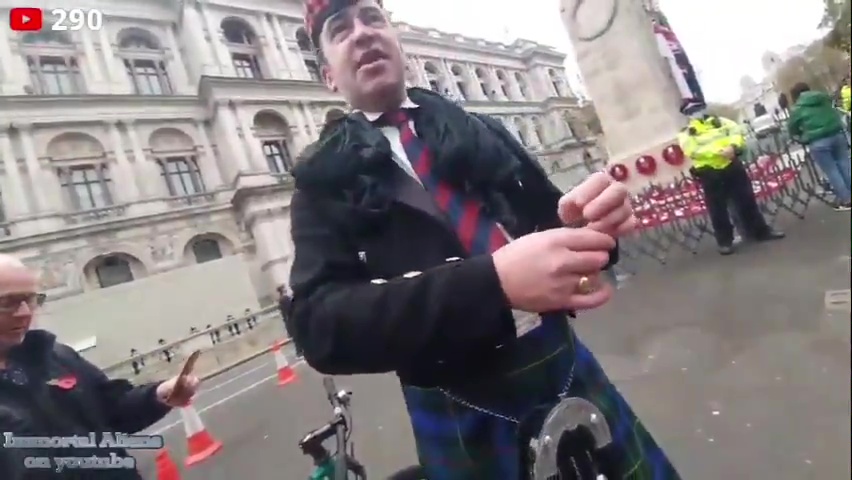 Ben Buckland was arrested after he marched up to police lines as they blocked the war memorial due to strict coronavirus restrictions.

Buckland – who says he served in the Royal Scots Guards – was later led away in handcuffs.

In a video posted to the Immortal Aliens YouTube page, he admits planning the stunt to provoke a reaction from cops.

“Do you honestly think that I give a f**k about being thrown over?”

He added: “It’s all in the movement. All I was doing was turning. It only takes a few inches to be closer to them to make them react and to be feart [afraid], that’s a Scots word.

“So when you do that and you get… and then they react. Unfortunately, we had to do it that way.

“That’s how we managed to succeed to get here, because they weren’t going to let us down.”

Video shows a wall of officers blocking entry to the Cenotaph yesterday.

The commemorations were impacted by the spread of Covid-19 and UK lockdown – meaning crowds had to avoid the area and stay at home.

Cops formed a wall around the perimeter of the Cenotaph to ensure the new rules were followed.

In the footage, a bagpiper is seen and heard playing while marching past the officers as a man yells: "Let the veterans through."

The piper then tries to walk through the police line before being stopped by cops and pushed away by the cops.

The crowd can be heard yelling at the officers, with one man shouting "what the f**k?". 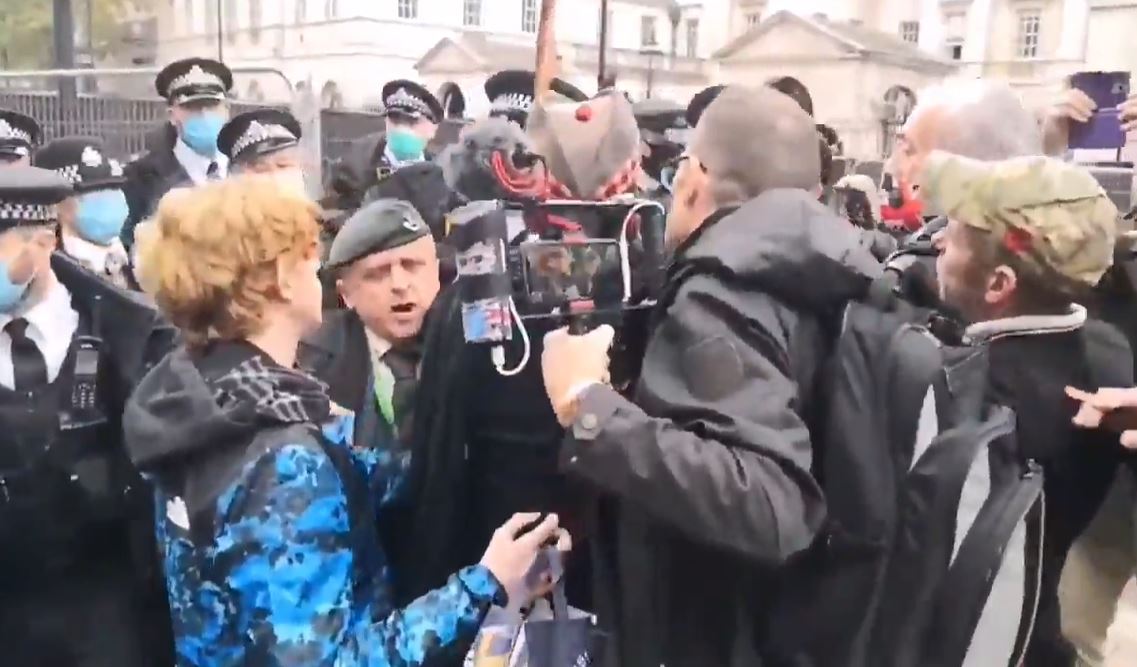 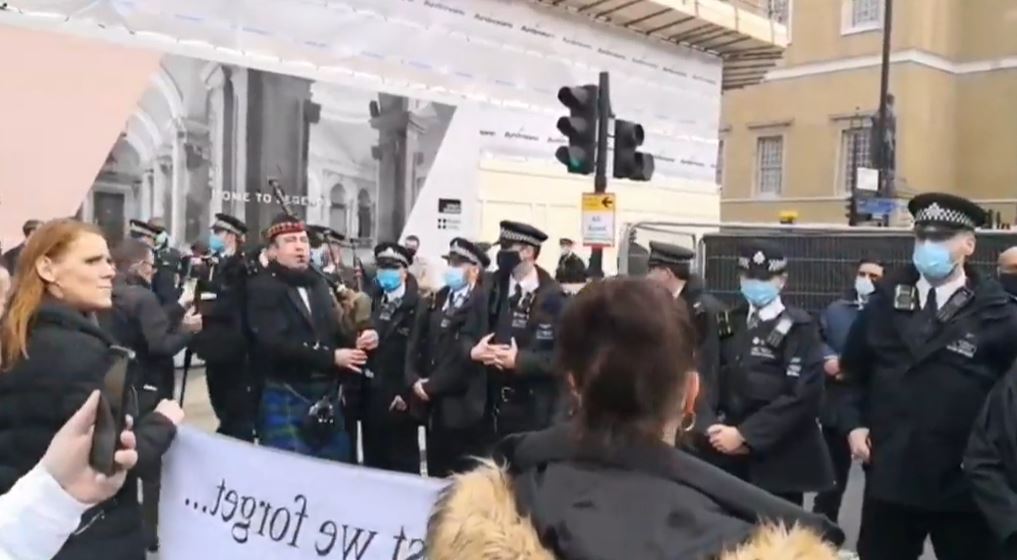 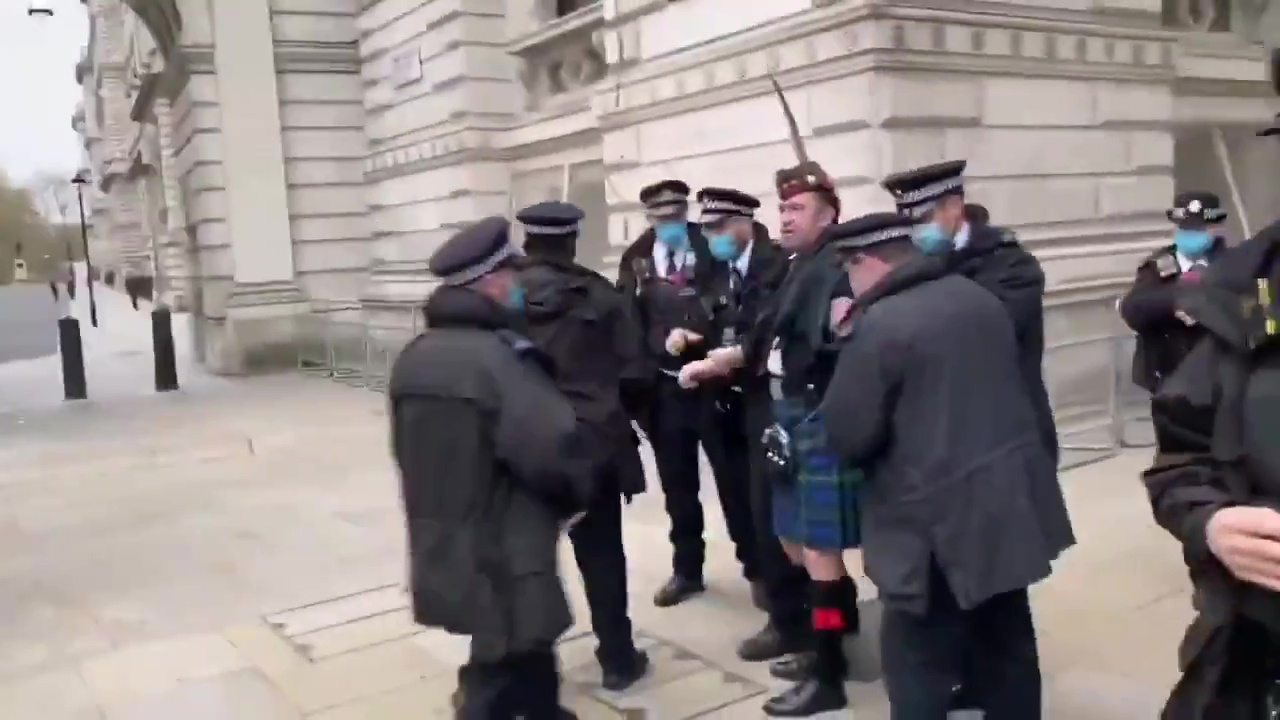 Some in the crowd then confront the cops, screaming and pointing in dramatic scenes.

The piper stands back up and also aggressively gestures at the officers before having to be physically held back.

A statement from the Met Police confirmed a man had been arrested in suspicion of assaulting a police officer.

The force said: "Police are aware of a video circulating online which shows an officer using force after a man had tried to enter a restricted area in Whitehall SW1.

"The actions of the officer will be looked at in the wider context of this incident.

"The man had previously been asked to wait while the restricted area was opened up and he would be able to attend the Cenotaph.

"The road had been closed off as the Remembrance Sunday event this year was a closed ceremony due to Covid restrictions.

"The area has since been opened up and members of the public can now go on their way.

"A man has been arrested on suspicion of assaulting a police officer. He remains in police custody at this time."

It’s not clear why Buckland staged the fall.

Video taken before his arrest shows Buckland blasting “the police state that we have now” and launching into an anti-lockdown rant. 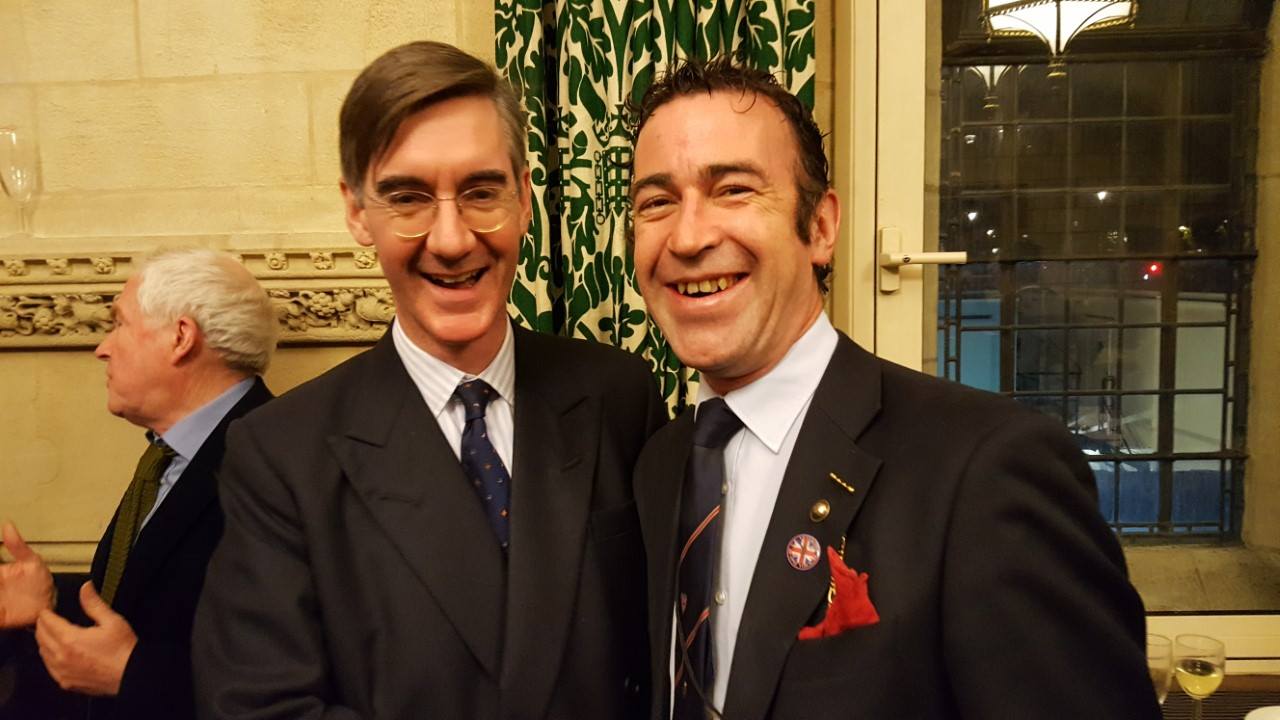 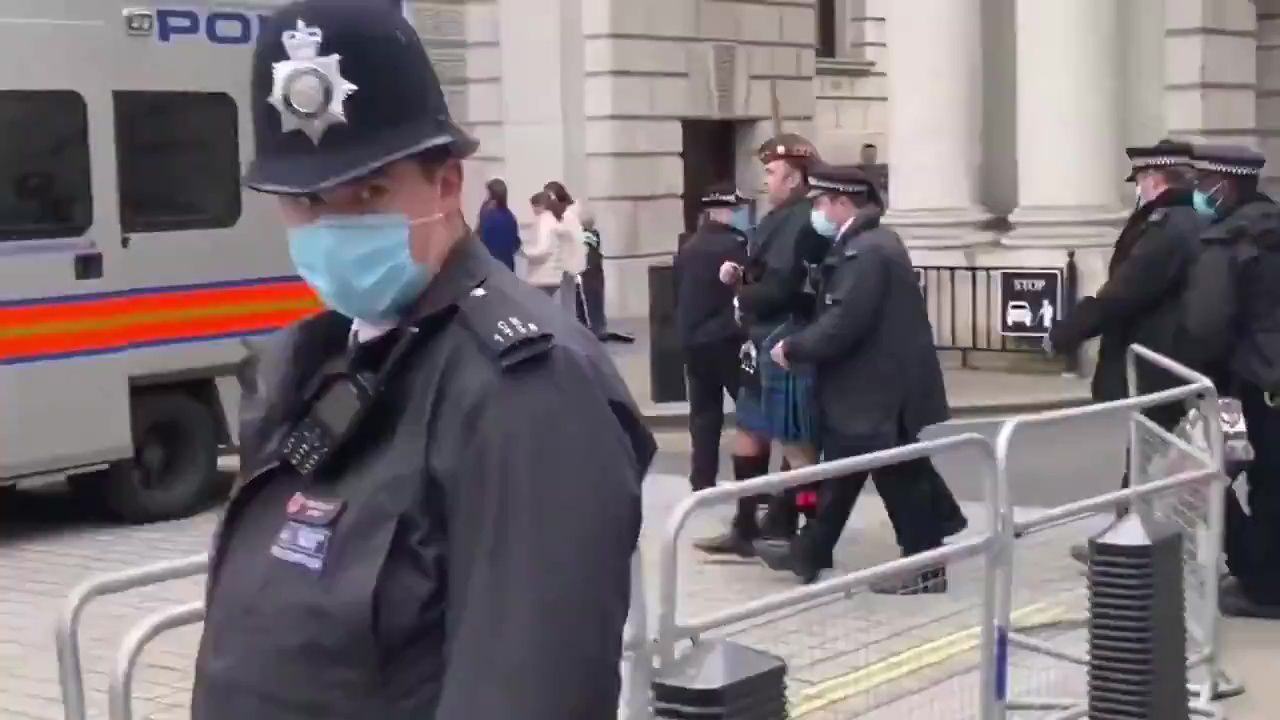 Buckland has played bagpipes at Brexit Party and UKIP events and has appeared with Anne Widdecombe and Jacob Rees-Mogg.

He has been pictured as part of delegation at 10 Downing Street.

On Buckland’s LinkedIn page, he claims he served in the Royal Scots Guards and the Ulster Defence Regiment.

Cops were also seen standing off with veterans near the same area as the confrontation with Buckland.

This year's Remembrance Sunday sparked controversy as tributes have taken place on a much-smaller scale than usual.

People were told they must keep moving during this morning's two-minute silence or they would have to fill out test and trace forms.

A war hero blasted the rule which applied at services and parades attended by dignitaries and veterans.

Falklands veteran Maj Gen Julian Thompson said: “It’s government control freakery. This can only be invented by some guy in an office who doesn’t have anything to do with the public.”

The Royal British Legion urged its members to support services that follow the guidelines, and only where social distancing measures can be adhered to.

“We are encouraging our branches and members to continue supporting local Remembrance services and parades that follow government guidelines and only where social distancing measures can be fully adhered to,” the charity said.

Under the rules on test and trace procedures, it states: “Event organisers must take reasonable steps to record the contact details of those attending including… members of the public who stop to spectate.” 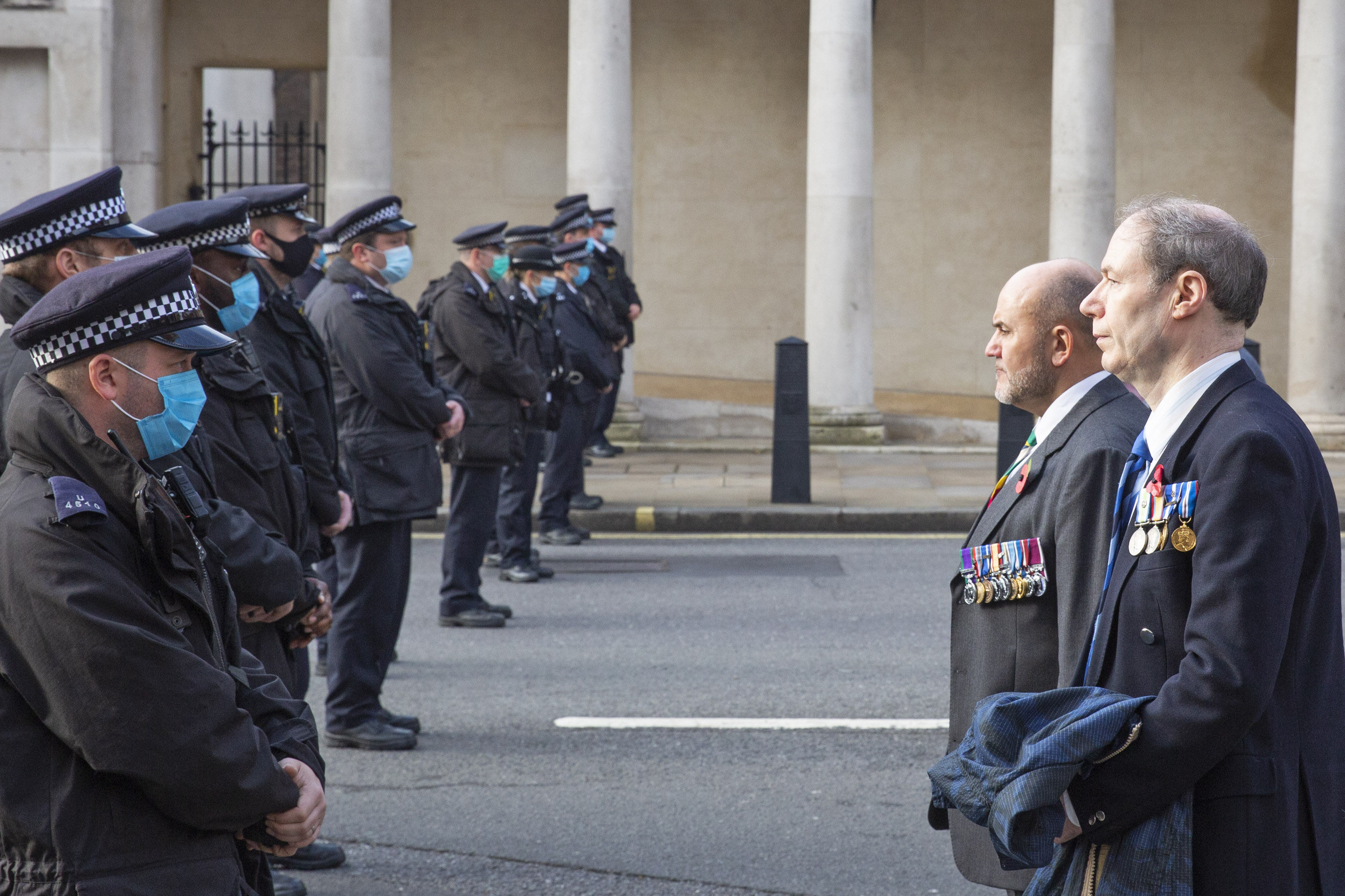 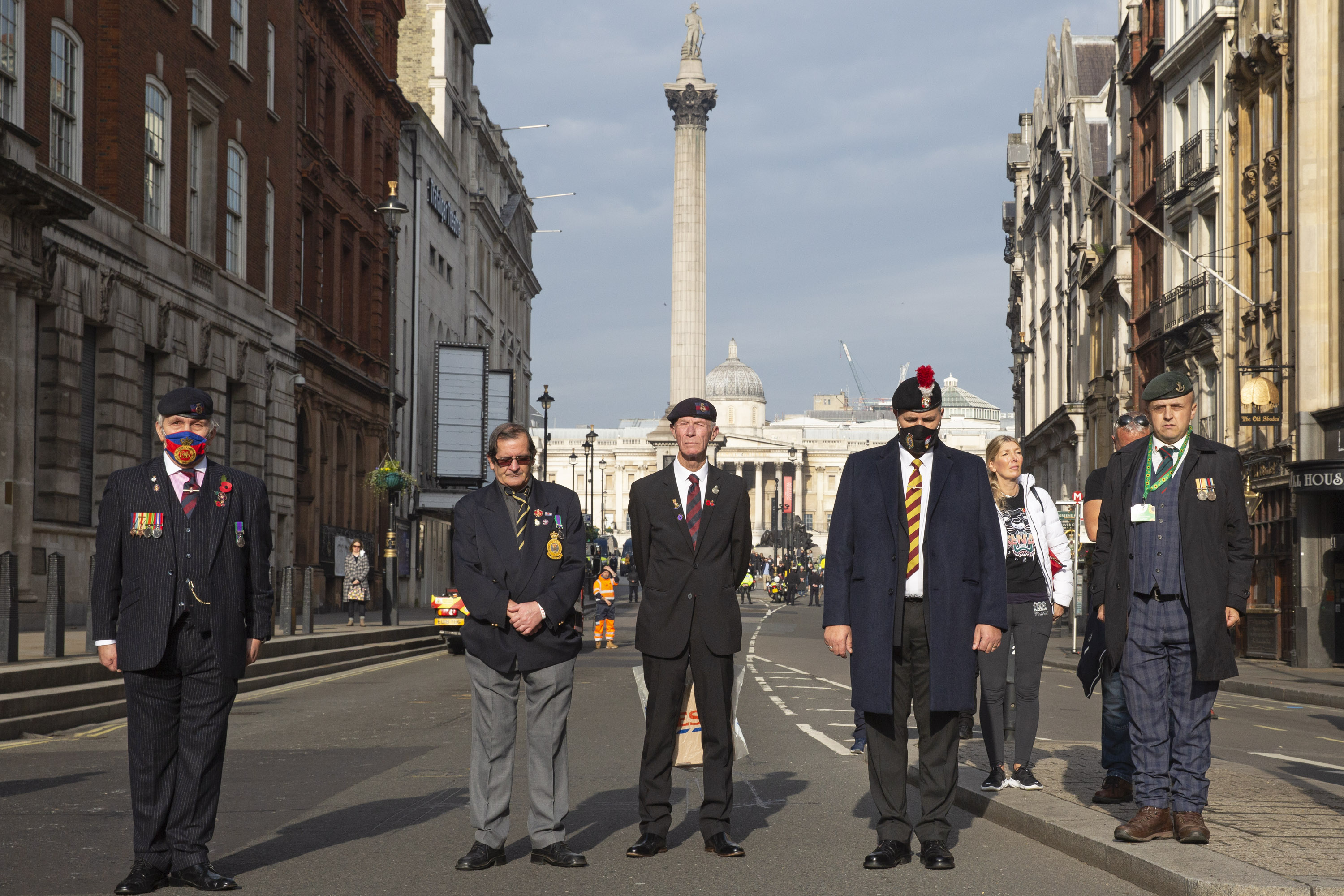