BBC Weather forecaster Carol Kirkwood warned temperatures will drop considerably overnight bringing the chance of snow in the coming days for some parts of the country. The weather meteorologist told BBC Breakfast viewers a new cold snap from the north will engulf the UK this week, battering the country with some strong gales. She said: “As we head through this evening and overnight, a band of cloud and patchy rain continues to sink down into the Channel Islands.

“Clear skies behind. A brisk cold northerly wind blowing in some showers across the North Sea coastal counties.

“More cloud coming in from the West with some patchy rain.”

She continued: “Tomorrow blues across many areas. Behind this warm front, we see a return to milder yellows.

“This is bringing in the cloud and patchy rain and drizzle. The best of the sunshine tomorrow will be the further east that you travel.

“You could also see some holes in the cloud across the Moray Firth and Aberdeenshire. Still la brisk breeze down the North Sea coastline.

“Temperatures between 8C and 11C.

“As we move from Tuesday into Wednesday, once again another front coming in from the north-west will introduce some rain, some snow on the hills, and it is going to be pretty windy later in the day, especially in the north and west.” 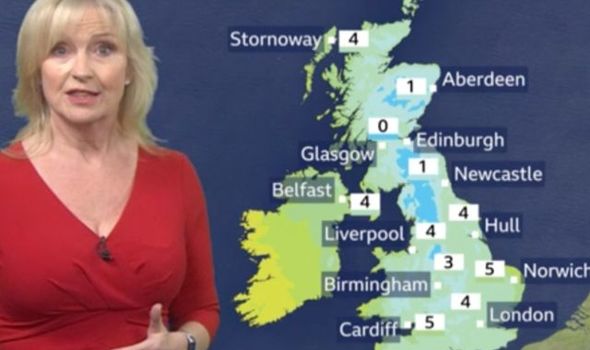 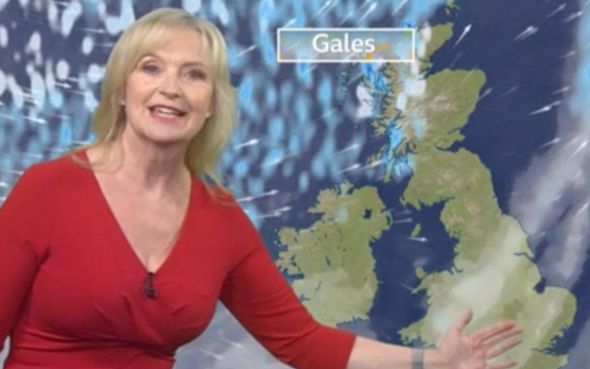 Weather maps from WXCharts show snowfall is expected from the early hours of Thursday December 3 in the Highlands region of Scotland.

While just 5cm is expected to start with, heavier snow showers are forecast on Sunday December 6, with up to 10cm.

The forecasters expect the risk of snow to continue into the following week, with flurries expected every day until Sunday 13.

Netweather also predicts snow to fall over the same period, with weather maps showing a high chance of snow on December 3, with the risk increasing as we head into the weekend.

Netweather’s snow risk chart shows there is a 100 percent chance of snowfall across Scotland on Saturday December 5 at 9am.

Major snow risk is shown with bright colours, with red, dark red and white indicating between 80-100 percent risk of snow.

Weather maps from WXCharts also show the period is expected to be characterised by freezing temperatures.

One chart, valid for Saturday December 5 at 6pm, shows the entire UK turn blue, indicating that temperatures are forecast to be below 0C.

Other maps by WXCharts show the north of the UK is expected to bare the brunt of the cold temperatures, with the mercury forecast to plunge to -2C on December 6 at 12pm.

The south of England is expected to see temperatures stay in the low single digits. 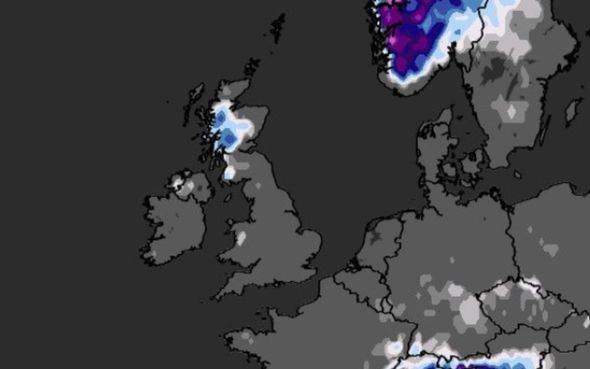 The Met Office expects the period from December 2 to December 11 to feel colder, with spells of rain and gales forecast.

They said: “High pressure and generally settled weather will likely give way to wetter, and at times windier, conditions through the first week of December.

“Outbreaks of rain are likely in most areas, notably northern areas at first, and perhaps more southern areas into the weekend.

“Gales may also develop, these most likely for exposed western areas. Later in the period it may well turn more settled, though colder, with a return of night frost and fog.

“Some showers are likely too, these perhaps wintry at times in the north.

“Temperatures may start off near normal, though often feeling colder in windier and wetter spells.

“Below normal temperatures are then slightly more likely for later in the period.”