Beer drinkers say they are boycotting Beavertown’s pints and would rather drink gin after the craft beer company, founded by the son of Led Zeppelin’s frontman, was taken over by drinks giant Heineken.

Craft beer fanatics have called the multi-million pound takeover of the North London brewery, famous for its Neck Oil pint, a ‘complete nail in the coffin’.

Established in 2011, Beavertown developed a cult following off the back of its rebellious craft brewery image.

Its founder, Logan Plant, says the beer was first developed in a restaurant’s basement kitchen and has previously spoken out about the importance of maintaining the company’s independence.

Its takeover by the Dutch beer giant for an undisclosed fee was announced yesterday, and it is believed to have been valued at over £200million. 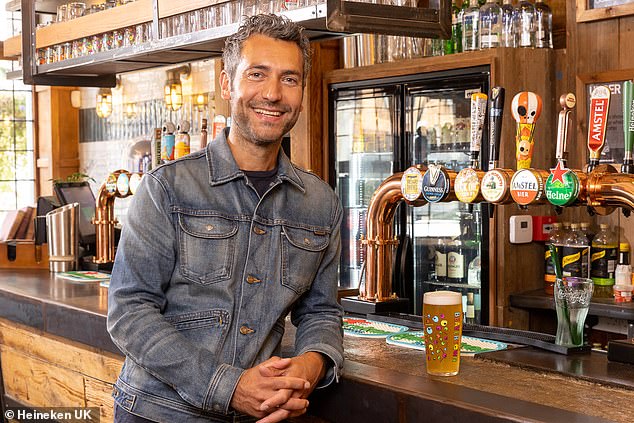 Established in 2011, Beavertown developed a cult following off the back of its rebellious craft brewery image. Its founder, Logan Plant, says the beer was first developed in a restaurant’s basement kitchen and has previously spoken out about the importance of maintaining the company’s independence 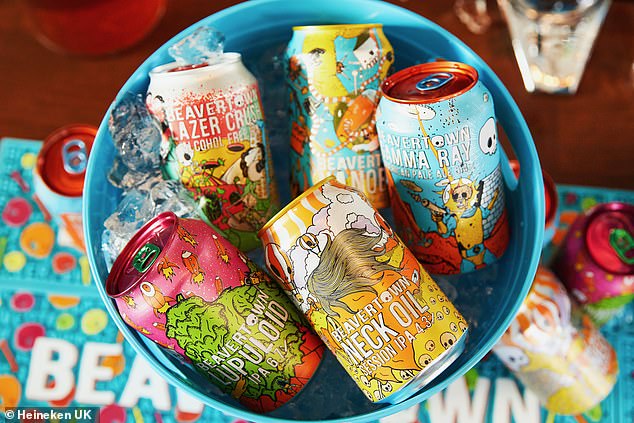 British beer brand Beavertown, famous for its Neck Oil IPA (pictured), is being taken over by Dutch drinks giant Heineken

Heineken, which also owns Amstel and Birra Moretti, bought a 49% stake in Beavertown for £40 million in 2018.

In an interview at the time, Mr Plant, son of rock legend Robert Plant, responded no to the question ‘are you selling up and selling out?’

‘It’s a minority deal,’ he said. ‘This whole process has been about me staying in full control of our journey with our team continuing to man the charge and take us forward in to the future together like never before.’

Mr Plant admitted to criticising ‘some aspects of what big brewers do’ and accepted that some fans would not be happy with his decision to take Heineken’s investment. 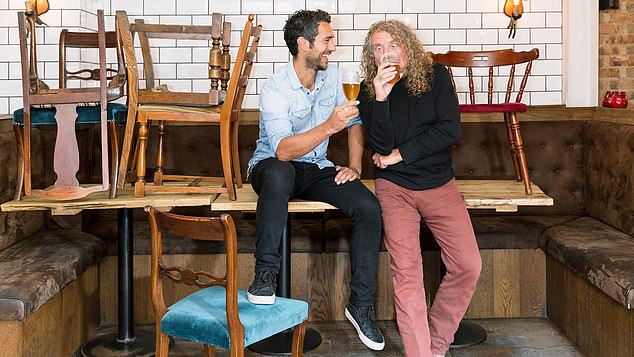 ‘I didn’t take the decision lightly,’ he said. ‘I used those criticisms to set clear red lines regarding any investment ensuring we continue to operate independently and according to the Beavertown Way.’

Since then, Heineken has pumped funds into the company to help its sales surge, before growth was affected by the toll of the pandemic.

Experts say the drinks giant has helped to increase the beer’s circulation and availability on pubs’ taps.

But ‘indie’ beer lovers have taken to social media to express their disappointment at the wholesale purchase of the popular brand.

One said: ‘Rest in peace Beavertown. Complete nail in the coffin. And if you think that any of their initial post-heine beer is craft then you don’t know craft beer.’ 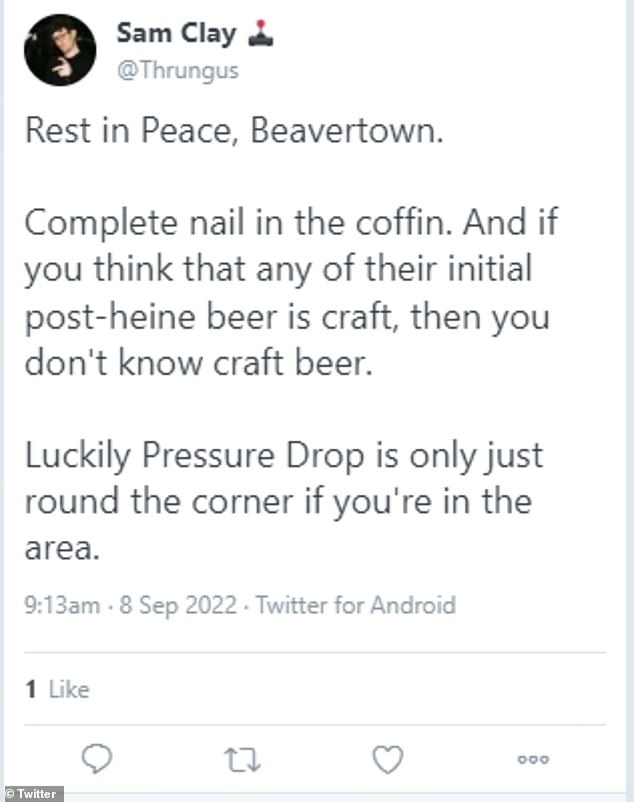 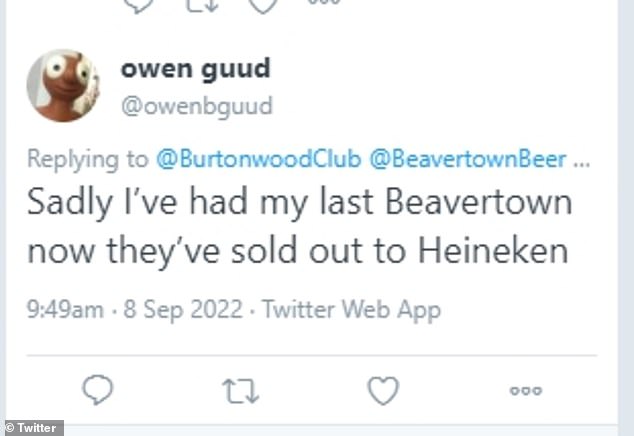 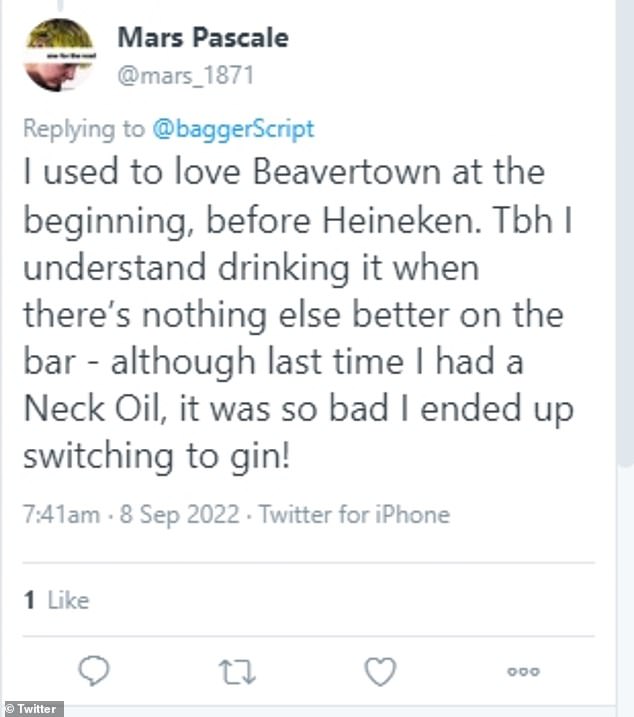 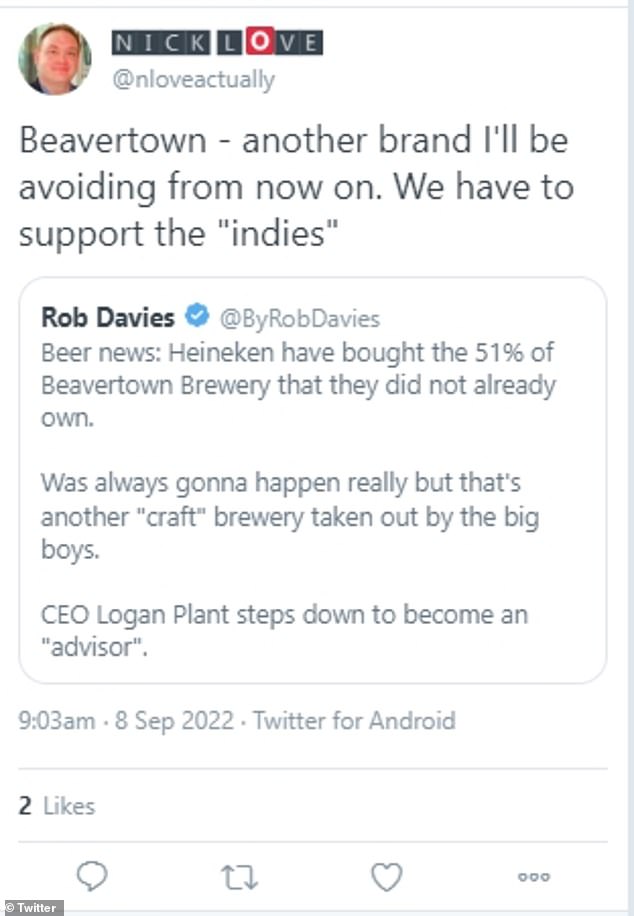 Another man said he would be avoiding the pint from now on and urged people to support independent British brewers, with another saying ‘sadly I’ve had my last Beavertown’.

One craft beer lover said he felt Neck Oil had gone downhill and that he had ‘switched to gin’.

Others said it had ‘sold out’, while some were more sympathetic.

Meanwhile another Twitter user said that while they were ‘sorry to hear’ about the takeover, it is ‘understandable in the current economic climate I guess’. 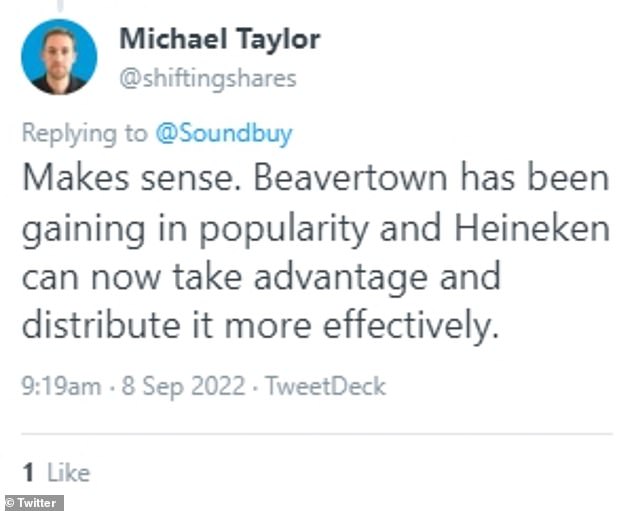 One Twitter user said that while they were ‘sorry to hear’ about the takeover, it is ‘understandable in the current economic climate I guess’

Pub landlords and brewers, who are struggling with the rising transport and fuel costs, have urged consumers to support local businesses in the wake of the announcement.

The Campaign for Real Ale (Camra) has said that 60 to 70 small brewers have gone under this year due to the hike in energy bills.

Heineken said it believes the new ownership structure will allow the brand to ‘grow significantly’ and could lead to the creation of 50 more jobs.

Logan Plant will step down as chief executive and take on a new advisory role as part of the deal and Craft Development Director at Heineken, Jochen Van Esch, will take the helm as Beavertown’s new managing director.

Following yesterday’s announcement, Mr Plant said: ‘This announcement is the natural next step for Beavertown and ensures investment in its people and brand.

‘Our award-winning beers will continue to be enjoyed by people up and down the country, with the same recipe as always and the same great taste.

‘The culture of Beavertown is incredibly important – our unique creativity in our design and marketing, our drive to brew the very best tasting beers, and the passion for excellence at the moment people order a pint – and this is something that will continue. 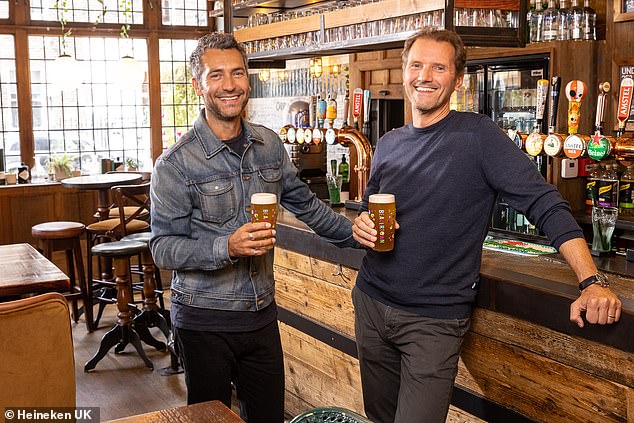 ‘With Heineken UK we have a partner who provides support, advice and investment, and gives us the space to flourish.

‘Without them, my dream of being a world-renowned brewery that began with that rice pan a decade ago, would have been impossible.’

Boudewijn Haarsma, managing director at Heineken UK, said: ‘This is a hugely positive step, and builds on a partnership that will see Beavertown continue to expand and flourish, while remaining committed to its independent creativity.

‘Heineken will fully support Beavertown’s brand position, inimitable creativity and huge growth potential, and will do so in a way that preserves its unique approach to beer.’