President Joe Biden made his first major address before the United Nations General Assembly on Tuesday – announcing new financial commitments as he tried to reestablish the U.S.’s place in the global community.

Biden said he’d ask Congress to double the amount of money for public climate financing – to about $11 billion a year – while also devoting $10 billion to curb hunger.

‘We are not seeking a new Cold War,’ Biden also assured the delegates, after the U.N.’s secretary- general expressed concerns about the U.S.’s deteriorating relationship with China. 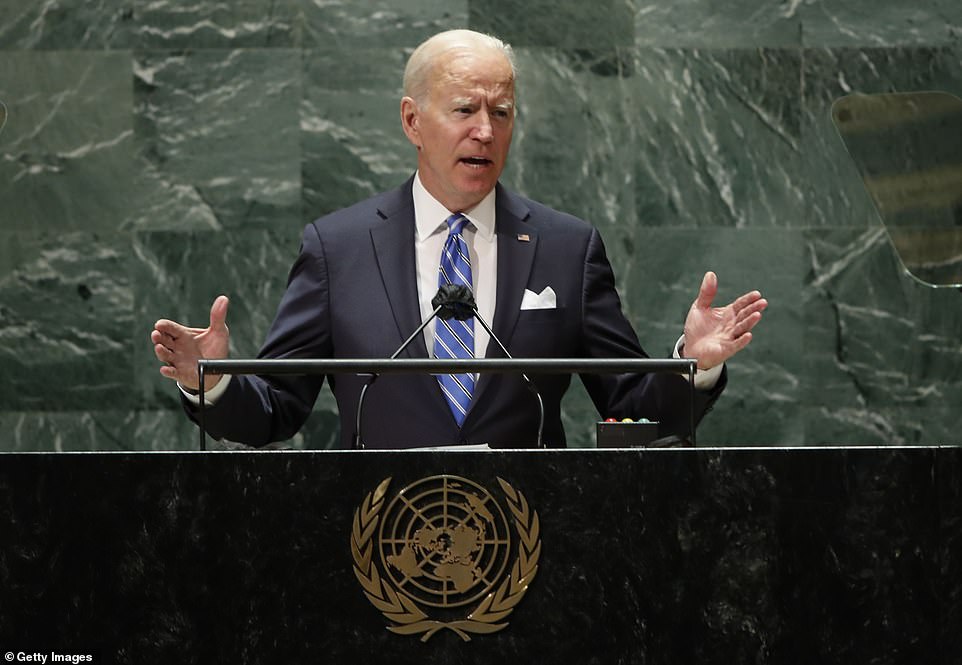 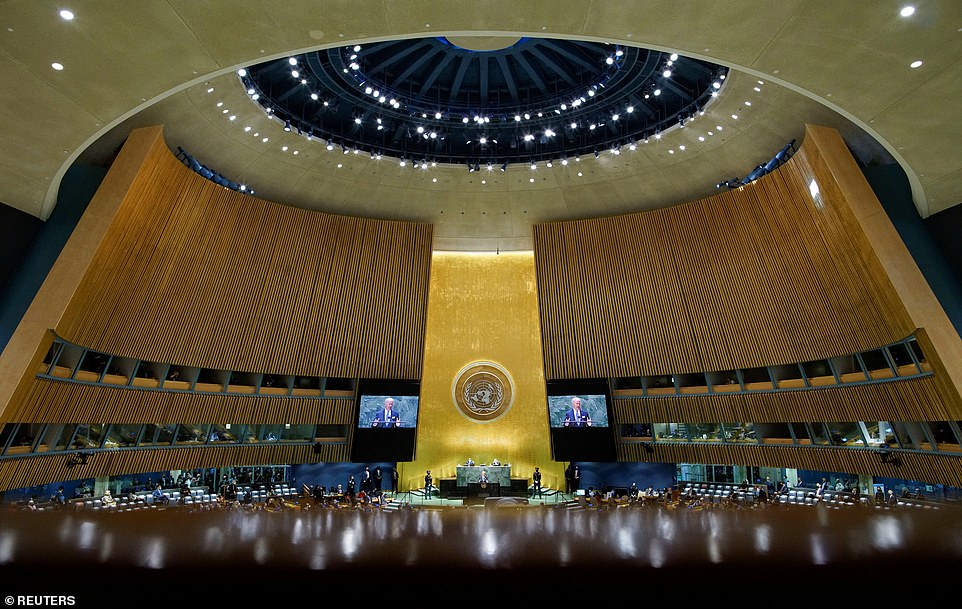 ‘We’ll stand up for our allies and our friends and oppose attempts by stronger countries to dominate weaker ones, whether through changes to territory by force, economic coercion, technical exploitation or disinformation, but we’re not seeking – I’ll say it again, we are not seeking a new Cold War or a world divided into rigid blocs,’ the president stated.

‘The United States is ready to work with any nation that steps up and pursues peaceful resolution to shared challenges – even if we have intense disagreements in other areas because we’ll all suffer the consequences of our failure if we do not come together to address the urgent threats like COVID-19, climate change or enduring threats like nuclear proliferation,’ Biden said.

Later, however, Biden name-dropped China’s Xinjiang region – where large numbers of Uyghur Muslims are being kept in detention camps.

‘We all must call out and condemn the targeting and oppression of racial, ethnic and religious minorities,’ Biden said.

Biden was addressing the conference on the heels of the U.S.’s frenzied pull-out from Afghanistan, which he portrayed as an opportunity.

‘I stand here today, for the first time in 20 years the United States not at war. We’ve turned the page. All the unmatched strength, energy and commitment, will and resources of our nation now fully and squarely focused on what’s ahead of us. Not what was behind,’ Biden said.

‘I know this, as we look ahead, we will lead,’ he continued. ‘We will lead on all the greatest challenges of our time.’

‘But we will not go it alone,’ Biden added. ‘We will lead together with our allies and partners and in cooperation with all those that believe, as we do, that this is within our power to meet these challenges, to build a future that enlists all of our people, [and] preserves this planet.’

He said that by ending 20 years of conflict in Afghanistan the United States was concluding ‘this period of relentless war’ by ‘opening a new era of relentless diplomacy.’

‘Today many of our greatest concerns cannot be solved or even addressed through the force of arms,’ Biden said. ‘Bombs and bullets cannot defend against COVID-19 or its future variants.’

‘To fight this pandemic we need a collective act of science and political will,’ Biden said.

‘We’re back at the table in international forums, especially the United Nations,’ Biden said.

‘We are reengaged at the World Health Organization working in close partnership with COVAX to deliver life-saving vaccines around the world,’ he continued.

‘We rejoined the Paris climate agreement and we’re running to retake a seat in the Human Rights Council next year, at the U.N.,’ he added.

Biden voiced to the ‘authoritarians of the world’ that democracies were alive and well.

‘The truth is, the democratic world is everywhere. It lives in the anti-corruption activists, the human rights defenders, the journalists, the peace protesters. On the front lines of the struggle in Belarus, Burma, Syria, Cuba, Venezuela and everywhere in between,’ Biden said. ‘It lives in the brave women of Sudan, who withstood violence and oppression to push the genocidal dictator from power.’

Biden also cheered on the ‘proud Moldovans’ and ‘young people of Zambia’ for democratic wins.

‘And while no democracy is perfect, including the United States – we’ll continue to struggle to live up to the highest ideals to heal our divisions,’ Biden said.

‘And as we face down violence and insurrection, democracy remains the best tool we have to unleash our full human potential,’ he argued.

Biden dedicated sections of his speech to try to draw Iran and North Korea back to the negotiating table over the issue of nuclearization.

He also said he remained supportive of a two-state solution between Israel and the Palestinians.

‘We’re a long way from that goal at this moment. But we must never allow ourselves to give up the possiblitity of progress,’ Biden said.

Throughout the address, Biden touched on climate and the COVID response again and again.

‘In April, I announced the United States will double our public international financing to help developing nations tackle the climate crisis. Today, I’m proud to announce that we’ll work with the Congress to double that number again, including for adaptation efforts,’ Biden said.

‘This will make the United States the leader in public climate finance,’ Biden announced.

‘With our added support together with increased private capital from other donors, we’ll be able to meet the goal of mobilizing $100 billion to support climate action in developing nations,’ the president said.

Biden was beefing up a commitment made prior to the U.S. signing onto the Paris climate agreement, which was done in 2015 under President Barack Obama.

The announcement comes weeks before world leaders will gather in Glasgow, Scotland for the COP26 climate summit. 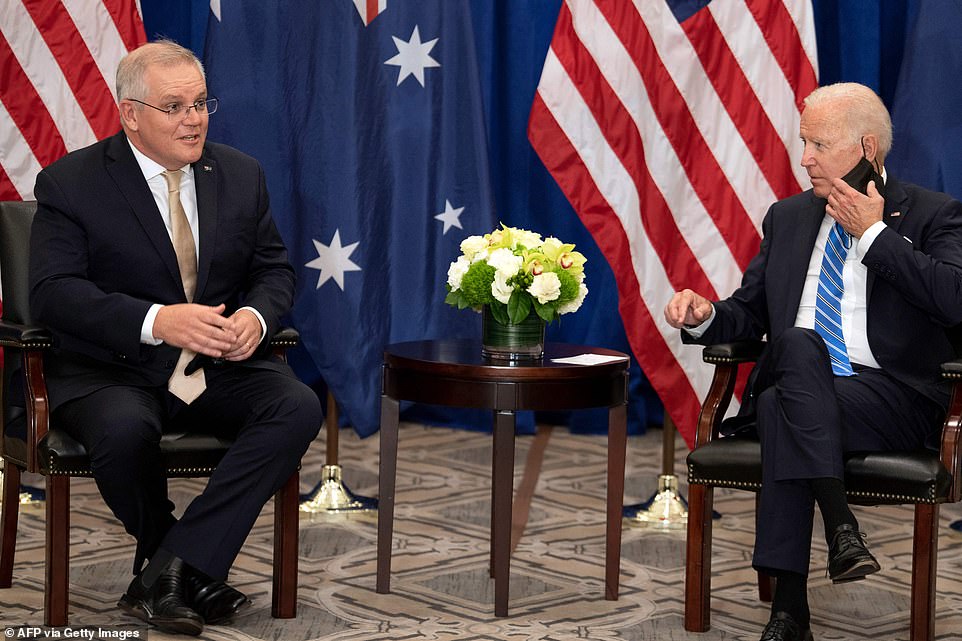 ‘Planes carrying vaccines from the United States have already landed in 100 countries, bringing people all over the world a dose of hope, as one American nurse termed it to me. A dose of hope direct from the American people – and importantly, no strings attached,’ Biden said.

Addressing food insecurity, Biden said ‘the United States is making a $10 billion commitment to end hunger and invest in food systems at home and abroad.’

He arrived with an entourage of aides to U.N. headquarters Tuesday morning – ignoring reporters’ questions.

Biden addressed the conference on the heels of the U.S.’s frenzied pull-out from Afghanistan and after the relationship with a key ally, France, was rattled, over a submarine deal with Australia.

Biden spoke about the importance of the U.S.’s relationship with the European Union during his remarks, but didn’t call out France specifically.

He didn’t answer questions during his one bilateral meeting of the day – with Australian Prime Minister Scott Morrison – about the dust-up with the French.

‘America is back. We believe in the United Nations and its values,’ Biden said, trying to constrast his White House with that of Trump’s. 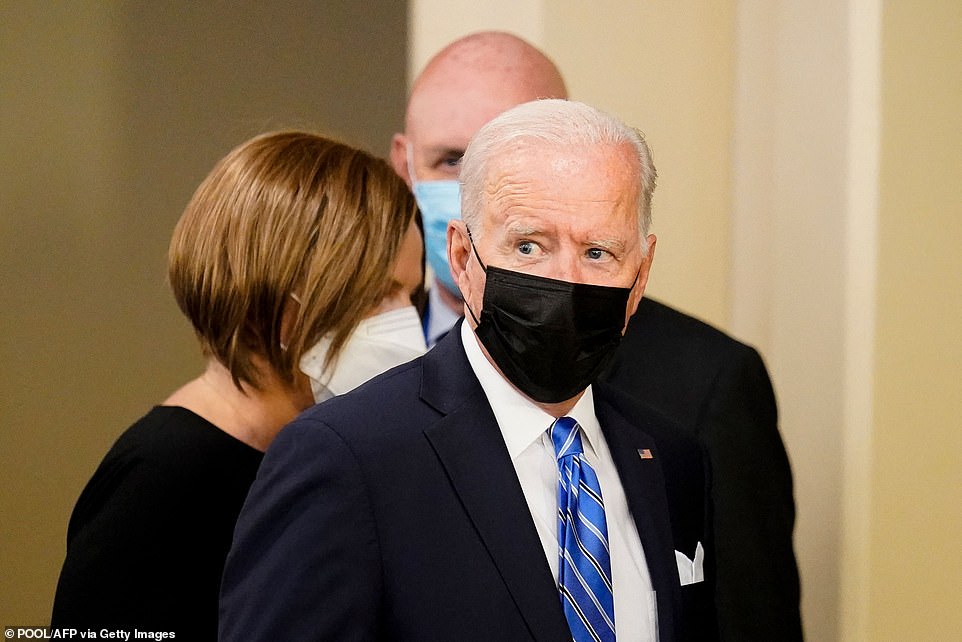 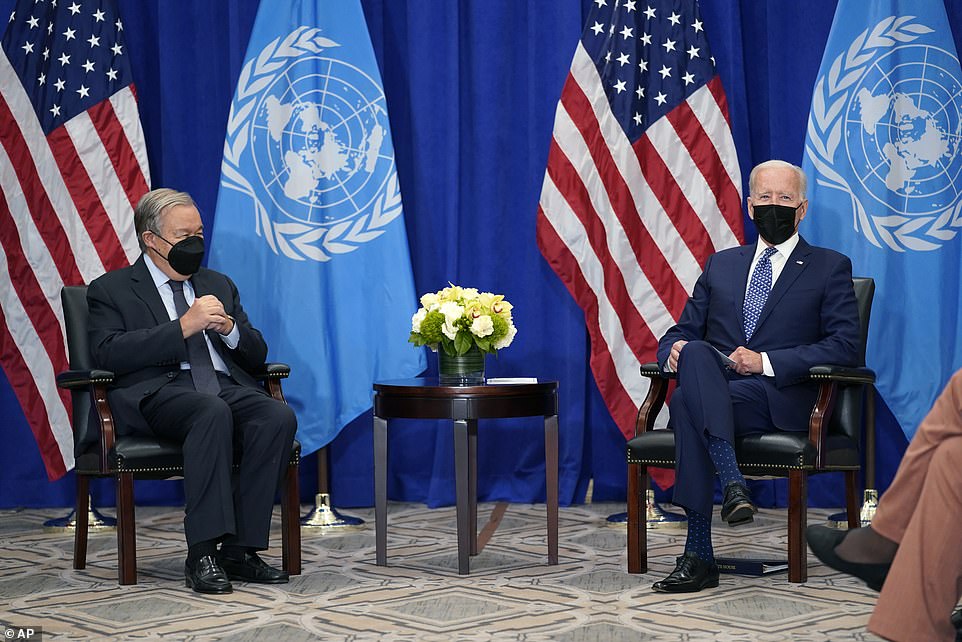 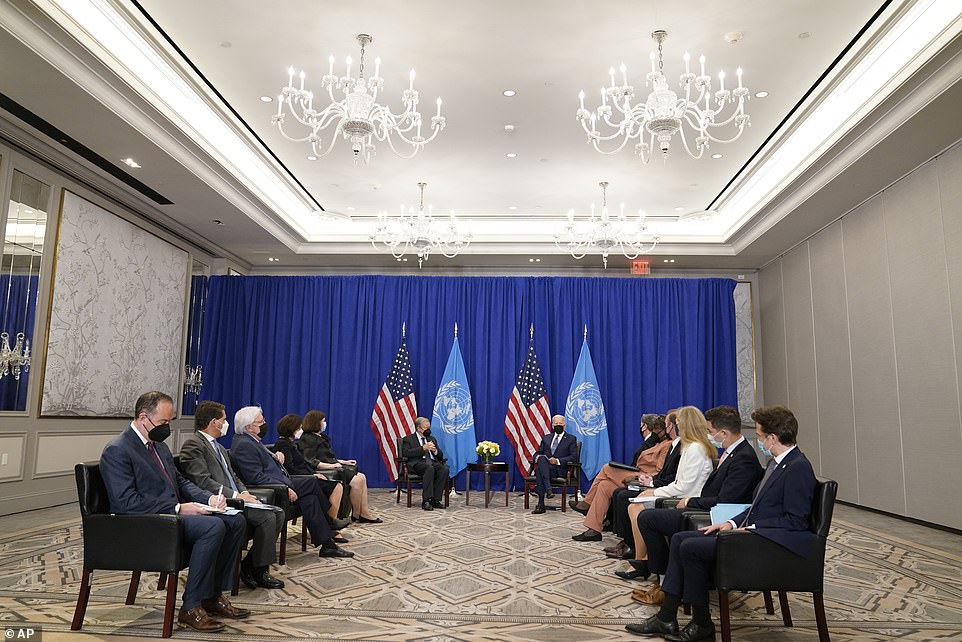 In their first in-person meeting, Guterres said he was ‘delighted’ to meet with the American president, saying Biden ‘clearly affirmed a strong commitment’ to the U.N.

‘The vision of the United Nations has never been short in ambition, any more than our Constitution,’ Biden said. ‘Ambition matters.’

‘Today, governments must continue to work together in a system to build on international law to deliver equitable prosperity, peace and security for everyone,’ Biden continued. ‘This is as vital and important today as it was 76 years ago,’ Biden told aides and reporters in the room, noting that he recently re-read the U.N.’s charter.

The duo took no questions and neither man brought up comments Guterres made over the weekend saying he feared another Cold War – this time between the U.S. and China – because the countries’ had a ‘completely dysfunctional relationship’ as of late.

Prior to Biden’s arrival in New York press secretary Jen Psaki said the president will make it ‘absolutely clear’ during his UNGA address he is not looking to start a Cold War with any country. 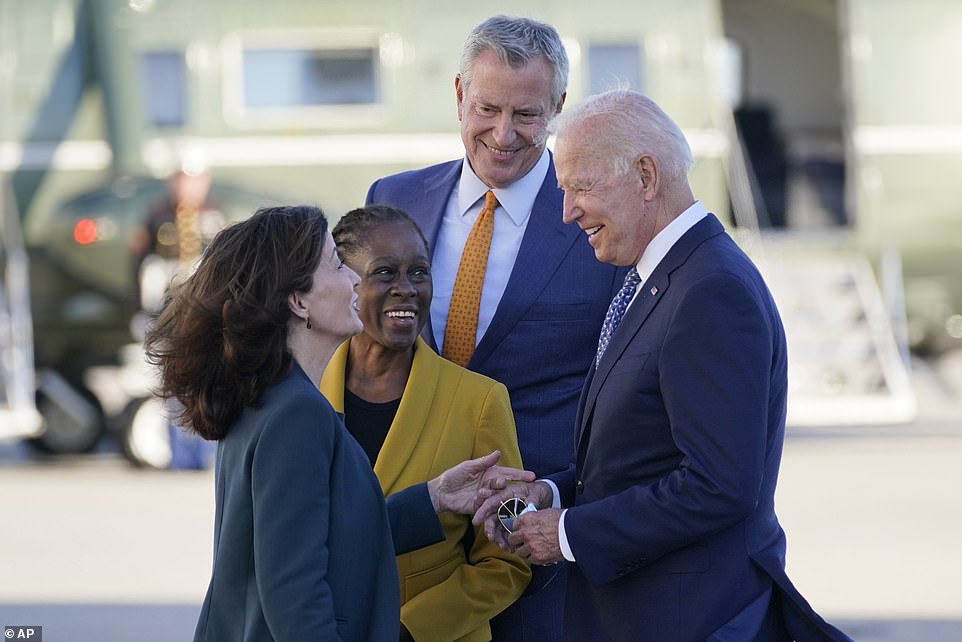 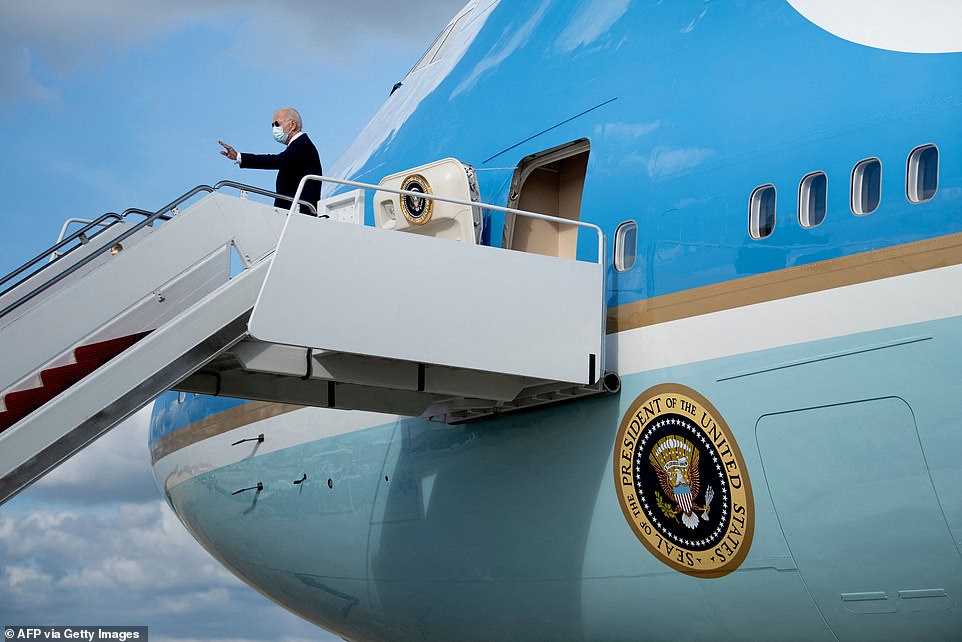 Biden waves from the stairs before boarding Air Force One en route to New York City where he’ll meet with Guterres Monday night, ahead of his Tuesday appearance at UNGA 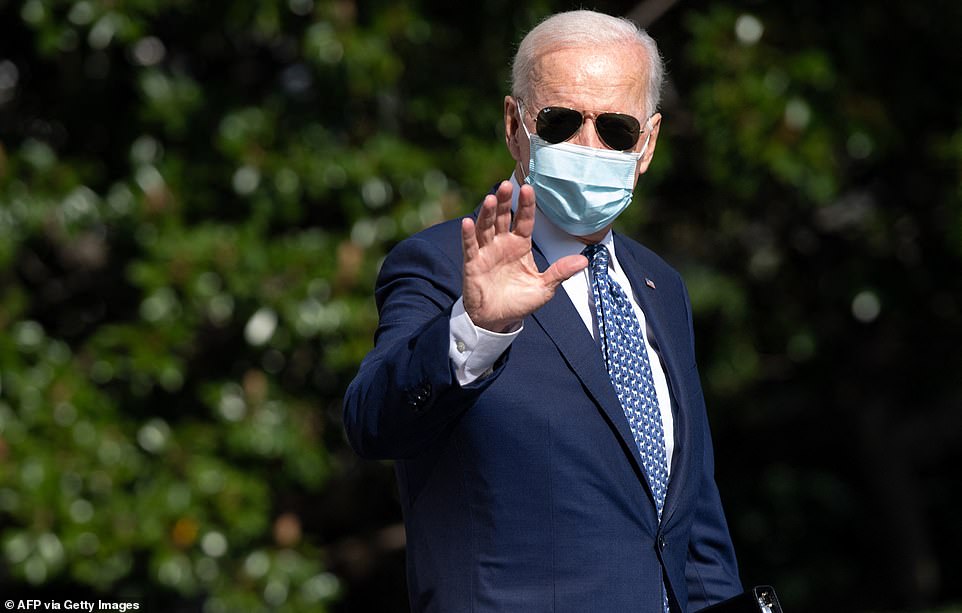 Biden waved to the watching press as he departed the White House Monday for New York City, where he’ll address the United Nations General Assembly for the first time as president on Tuesday

‘I would also note that tomorrow the president will deliver a speech … at the U.N. General Assembly and he will make absolutely clear he is not looking to pursue a future, new Cold War with any country in the world,’ Psaki said. ‘We will continue to pursue our interests. We will continue to lift up global priorities, but that is not the objective or policy of the United States.’

A senior administration official pressed this point when talking to reporters Monday.

‘And the speech will center on the proposition that we are closing the chapter on 20 years of war and opening a chapter of intensive diplomacy by rallying allies and partners and institutions to deal with the major challenges of our time,’ the official said before ticking them off.

‘COVID-19, climate change, emerging technologies, rules of the road on trade and economics, investments in clean infrastructure that is noncorrupt and high-standards, a modern approach to counterterrorism, and vigorous competition with great powers – but not a new Cold War,’ the White House official said.

When Biden arrived in New York he was greeted by the state’s new governor, Kathy Hochul, along with New York City Mayor Bill de Blasio and his wife Chirlane McCray.

He will only stay in New York through Tuesday afternoon and then return to the White House to host British Prime Minister Boris Johnson for a bilateral meeting.

On Wednesday, Biden will host a virtual COVID-19 summit as part of UNGA – again from the White House.

On Friday, Biden will host the first in-person Quad summit with the leaders of Australia, India and Japan.

On Tuesday, he’s meeting Austalian Prime Minister Scott Morrison on the sidelines of the summit.

‘He couldn’t do all three on one day and do the Quad Summit, and so he’ll see Prime Minister Morrison tomorrow in New York,’ the White House official said Monday.