Washington: US President Joe Biden has reversed his predecessor’s ban on transgender troops serving in the military, moving swiftly on a social issue as he broadly exerted the power of his office to prohibit discrimination against people based on their sexual orientation or gender identity.

With Lloyd Austin, his new secretary of defence, and General Mark Milley, the chairman of the Joint Chiefs of Staff, beside him in the Oval Office, Biden signed an executive order restoring protections put in place in 2016 by then president Barack Obama that had opened up the ranks of the armed services to transgender people. 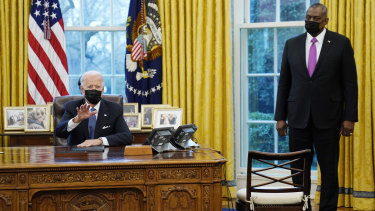 US Secretary of Defence Lloyd Austin listens as President Joe Biden speaks before singing an executive order reversing the Trump era ban on transgender serving in the military.Credit:AP

“What I’m doing is enabling all qualified Americans to serve their country in uniform,” he said from behind the Resolute Desk moments before putting his signature on the document.

The President’s action came less than a week after he began his presidency with another wide-ranging civil rights executive order directing the government to implement protections for lesbian, gay, bisexual and transgender people in the US based on the landmark Supreme Court’s decision in Bostock v. Clayton County last year. The court held that employers violated the Civil Rights Act of 1964 when they fired a long-time staff member shortly after the employee revealed that he or she was homosexual or transgender.

That first order revoked efforts by then president Donald Trump to narrowly interpret that case. Instead, Biden’s administration will require all federal agencies to expand their understanding of the court’s ruling to protect LGBT people from discrimination in numerous areas, including housing, education, employment and healthcare.

The swiftness of Biden’s move on transgender troops signalled a willingness by the new administration to put its own stamp on Defence Department social issues. It follows an announcement from Austin on Saturday that he was ordering a review of how the Pentagon has been handling sexual assault matters.

Biden and the Defence Department leadership will also have to wrestle with a reckoning on race facing the Pentagon, which has long struggled to promote officers of colour and only now has its first black defence secretary in Austin.

The Pentagon position on LGBT issues has evolved over time. Openly gay Americans were not allowed to serve until 2011, when Obama ended the “don’t ask, don’t tell” policy put in place by the Clinton administration in 1993.

Biden has long embraced a more expansive view of gay and transgender rights than some in his party. In 2012, his public declaration of support for same-sex marriage helped push Obama to take that position. During the 2020 campaign, Biden vowed that, if elected, he would quickly roll back Trump’s restrictions on such rights.

A Gallup poll taken in 2019, after Trump banned transgender service in the military, showed that 71 per cent of all Americans disagreed with that action. But among Republicans, a slight majority supported keeping transgender people out of the military.