The mandates were heralded as a way to help get America out of the Covid pandemic, but Biden now finds himself fighting for them — particularly the one that targets private businesses — on three fronts: in the judicial system, in Congress and in the court of public opinion.

The White House says it is prepared for the fight. A legal team has been assembled to wage the battle in the courts. Biden is prepared to veto any legislation that Congress might manage to pass to erode his mandates as bipartisan opposition grows. And he will keep talking to the public about his goals.

But the fight is only going to get harder, possibly compounded by the unknowns created by the omicron variant of the coronavirus and the growing complaints within Biden's own party.

"It’s good politics," a Democratic House member said of vaccination mandates. But the lawmaker lamented that "some in the White House want to quietly walk away." 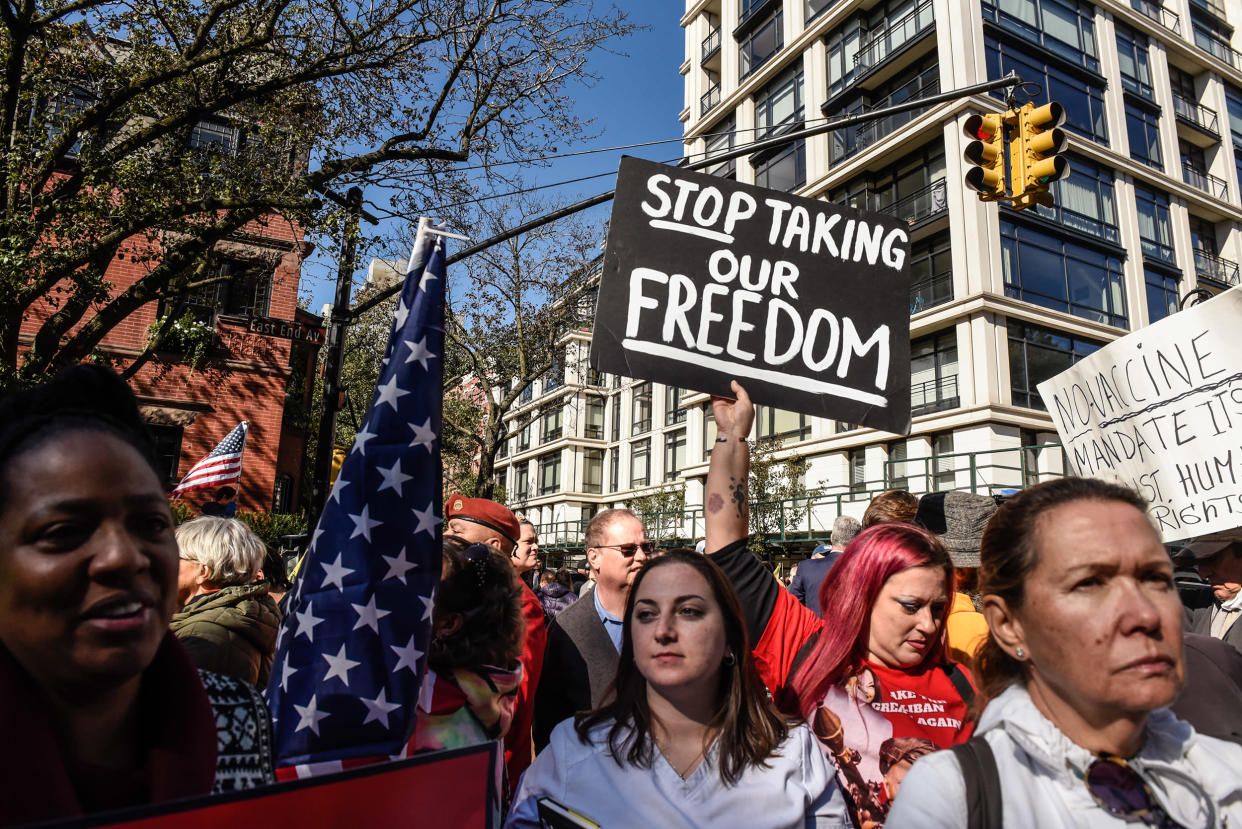 Biden is gambling that the long-term value of defeating the disease — for Americans' health, the economy and his own standing — far outweighs short-term political considerations, said a White House aide and a strategist close to the administration, who asked to speak anonymously to detail internal thinking.

The official argued that vaccinations are “one of the best weapons we have against the virus” and that the persistence of the virus is fueling inflation and disrupting supply chains. The official said it’s “very unfortunate” that Republicans are “acting like lobbyists for the virus” and standing in the way of Biden’s plan to defeat it.

White House officials have said the mandates are already delivering the intended results, regardless of the recent political and legal challenges.

But that may further erode the ability to push back against the opposition — if the mandates have already convinced everyone who can be convinced, it's possible that more Democrats, and even the White House, will begin to conclude that the rules have served their purpose and that their usefulness has run out.

Publicly the White House says it will not back down from any challenges.

Two Senate Democrats — Joe Manchin of West Virginia and Jon Tester of Montana — voted with Republicans on Wednesday evening to nullify Biden's vaccination mandate for private businesses. The measure passed in a 52-48 vote.

Tester said he had repeatedly heard from small businesses "about the negative effect the private business vaccine mandate will have on their bottom lines and our state’s economy," while Manchin argued that the government "should incentivize, not penalize, private employers whose responsibility it is to protect their employees from Covid-19."

It is unclear whether the bill would pass the Democratic-controlled House or even come up for a vote. But if it were to land on Biden's desk, he will veto it, White House press secretary Jen Psaki said.

The White House has also said Biden plans to continue to move forward with the mandates despite the number of recent court rulings challenging them. Officials have said they are confident in their legal ability to implement the mandates across the country.

Asked about the most recent ruling by a federal judge in Georgia blocking the administration from enforcing the mandate for federal contractors, Psaki said the Justice Department would "vigorously defend" the rule in court.

The mandates work, she argued, saying that 92 percent of federal employees have already been fully vaccinated with initial series of the vaccines and that big companies like Lockheed Martin have reported a more than 95 percent compliance rate. In the meantime, Psaki said, "the president and the administration will continue pressing forward."

It is not as clear how the administration plans to confront dipping poll numbers, especially as leaders like Michigan Gov. Gretchen Whitmer, a Democrat, voice some hesitancy over widespread mandates.

Christopher Wilson, a Republican strategist who was Virginia Gov.-elect Glenn Youngkin’s pollster, said that while polls generally have shown majority support for the mandate, the support is dropping.

Recent polls found approval ratings for mandates dipping, including a recent Wall Street Journal poll that found 50 percent support. That is down from the earlier polls that registered support as high as 58 percent approval this fall.

"When we've tested this in campaigns we've included the fact that employees who aren't vaccinated could lose their jobs or be forced to pay huge costs for weekly tests," Wilson said in an email. "Filling in that side of the equation makes the mandate unpopular, particularly with minority voters.

"This is another example of the Democratic party embracing authoritarian governance, pushing large parts of their base away," he added.