Washington: Joe Biden is America's newest podcast host. He's also launched an email newsletter and began holding Zoom calls this week with individual supporters in what his campaign is calling a "virtual ropeline".

Like much of the world, the presumptive Democratic presidential nominee is stuck at home to prevent the spread of the coronavirus. But amid growing concerns that he's missing opportunities to build enthusiasm around his campaign for the White House, the former vice-president is stepping up his efforts to connect with voters. 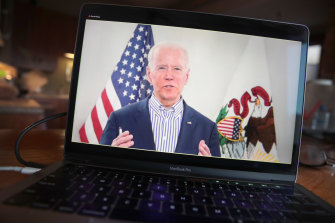 Joe Biden holds a virtual campaign event. The presumptive Democrat presidential nominee is reaching out to voters to keep the momentum up during the coronavirus pandemic.Credit:Getty Images

"We are trying to leave no channel unturned when it comes to where we put the VP and how we get the VP to engage with people," said Rob Flaherty, the Biden campaign's digital director.

The pandemic has effectively frozen traditional campaigning, preventing Biden and President Donald Trump from the type of massive rallies that are a hallmark of presidential politics. In some ways, that's beneficial to Biden, who has struggled in large settings but is known for his ability to bond with voters in more intimate gatherings.

Flaherty said the campaign started the Zoom calls to try to capitalise on Biden's strengths in individual conversations. Biden's team allotted 45 minutes for him to speak with eight supporters, but he ended up speaking to them for around 90 minutes.

The recipients of his calls were a mix of volunteers, people who had emailed in their stories and others in touch with him or his campaign. They included a woman whose child was struggling with a stutter, something Biden himself has spoken openly about experiencing.

The campaign is still deciding how to release video of the calls, but aides say they plan to hold similar events as long as social distancing guidelines are in place.

Biden is adapting to the new virtual reality in other ways. He's holding fundraisers and press conferences online. His email newsletter includes campaign updates along with music suggestions, reading lists and answers to questions submitted by voters. 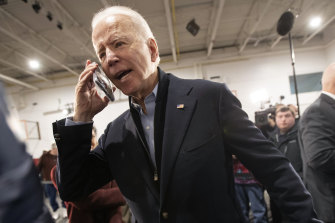 In the podcasts, he recently interviewed Michigan Governor Gretchen Whitmer and the Obama administration's point person during the Ebola outbreak.

In some respects, the moves simply bring Biden up to speed on tactics his former rivals deployed during the Democratic primary.

Massachusetts Senator Elizabeth Warren encouraged small-dollar donors by surprising them with impromptu phone calls that were later posted on social media. Vermont Senator Bernie Sanders, who exited the race this week, has had a podcast and a campaign newsletter and released original content on YouTube. His livestreamed town hall meetings and addresses drew millions of views online.

Biden describes himself as a "tactile politician" and some virtual campaign offerings haven't seemed natural for him. During a Friday fundraiser, he was asked how he was adjusting to the new online-only world of campaigning.

"I'd much prefer to be out there shaking hands, looking at people, because what I find is that's when they tell you what's in their heart," he said.

At 77, Biden is far from a digital native. He's told supporters he's the "guy that, when something happens on my cellphone, I turn to one of my granddaughters and say, 'Can you help me out here?"'

But he later added: "I'm trying to learn."

Biden is becoming more fluid with online engagement. He held a livestreamed roundtable with first-responders and frontline nurses dealing with the coronavirus crisis, as well as a happy hour event with young voters, during which some of them drank beer. Biden, who doesn't drink alcohol, sipped Gatorade from a paper cup.

And from a television studio recently built in his basement, Biden is doing more live media interviews, appearing on the Sunday shows along with programs like the US ABC's The View and late-night talk shows hosted by Jimmy Kimmel and Jimmy Fallon.

'We need to create intimacy at a distance."

The goal is to get Biden's message out to new audiences, and to help him connect with voters, said Stefan Smith, who served as Pete Buttigieg's online engagement director.

"We need to invest in platforms that help us bridge the physical distance that COVID has forced between candidates and voters – we need to create intimacy at a distance," he said. "And the vice president's digital strategy is trying to do that by putting him as close to voters as possible."

The launch of new formats is as much a necessity for the campaign as it is an opportunity, however, as Biden works to compete with the daily noise of White House briefings, live briefings from governors and a non-stop stream of breaking coronavirus news.

The Biden camp says for the past three weeks ending last Sunday, they received 45 million views for their campaign-created video – including interviews, roundtables and other virtual events – across digital platforms. But he faces an uphill battle in competing with Trump's online army.

The Trump campaign has launched its own livestreamed videos that feature the President's surrogates and air online daily at 8pm Eastern time. They typically receive more than 1 million views every night. The President himself racks up millions of views for his daily press briefings. He also occasionally calls in to Fox News, where he can speak to an audience of millions.

"I'm glad to see Joe Biden adapting to the new normal because it often feels like Donald Trump is manipulating his way to a second term," said Democratic strategist Andrew Feldman.

Indeed, Biden himself acknowledged during the Friday fundraiser that he's had "a lot of people who are supporters getting very worried," asking, "Where's Joe?" He said while he's gotten more comfortable online, "you can't compete with the President."