WASHINGTON — Despite President Biden’s pledge to aggressively cut the pollution from fossil fuels that is driving climate change, his administration has quietly taken actions this month that will guarantee the drilling and burning of oil and gas for decades to come.

The clash between Mr. Biden’s pledges and some of his recent decisions illustrates the political, technical and legal difficulties of disentangling the country from the oil, gas and coal that have underpinned its economy for more than a century.

On Wednesday, the Biden administration defended in federal court the Willow project, a huge oil drilling operation proposed on Alaska’s North Slope that was approved by the Trump administration and is being fought by environmentalists. Weeks earlier, it backed former President Donald J. Trump’s decision to grant oil and gas leases on federal land in Wyoming. Also this month, it declined to act when it had an opportunity to stop crude oil from continuing to flow through the bitterly contested, 2,700-mile Dakota Access pipeline, which lacks a federal permit.

The three decisions suggest the jagged road that Mr. Biden is following as he tries to balance his climate agenda against practical and political pressures.

Mr. Biden “can’t afford to take a pure position on the climate” because he lacks strong majorities in Congress, said William A. Galston, a senior fellow in governance studies at the Brookings Institution, a Washington think tank. “That is the backdrop against which this president and the administration will be making trade-offs on every single issue.”

After successfully campaigning on a pledge to address global warming, Mr. Biden hit the pause button on any new gas or oil leases on federal lands and waters, returned the United States to the Paris Agreement on climate change and squashed the controversial proposal to build the Keystone XL pipeline — all on his first day in office.

But he is also trying to provide a safety net for people employed in the oil, gas and coal sectors, including union workers, and ease the transition into wind, solar and other renewables.

As important, Mr. Biden is trying to avoid alienating a handful of moderate Republicans and Democrats from oil, gas and coal states who will decide the fate of his legislative agenda in Congress. Among them is Lisa Murkowski, the Republican senator from Alaska for whom the Willow project is a top priority and who grilled Deb Haaland about it during Ms. Haaland’s confirmation hearing for interior secretary in February.

Ms. Haaland, who opposed the Willow project as a member of Congress, personally called Ms. Murkowski and other members of Alaska’s all-Republican delegation this week to tell them the Biden administration would support the project in federal court in Anchorage, House and Senate aides confirmed.

The decision on the Willow project was made as the Biden administration is trying to win Republican support for its infrastructure package and other policies, said Gerald Torres, a professor of law and environmental justice at Yale University. “He is going to need Murkowski’s vote for some things,” he said. “These are political calculations.”

Senator Dan Sullivan, Republican of Alaska, said in an interview that he, Ms. Murkowski and Representative Don Young of Alaska have all met with Ms. Haaland “ad nauseam” about Alaska issues, including the Willow project. Mr. Sullivan said he had repeatedly made the case that Willow’s projected 2,000 jobs and $1.2 billion in revenues should be seen as part of the Biden administration’s focus on environmental equity, as it would directly benefit local and Alaska Native communities in the North Slope.

“If you kill these jobs you are turning environmental justice on its head,” Mr. Sullivan said.

The multibillion-dollar plan from ConocoPhillips to drill in part of the National Petroleum Reserve would produce more than 100,000 barrels of oil a day until 2050. It is being challenged by environmental groups who said the Trump administration failed to consider the impact that drilling would have on fragile wildlife and that burning the oil would have on global warming.

In a paradox worthy of Kafka, ConocoPhillips plans to install “chillers” into the permafrost — which is thawing fast because of climate change — to keep it solid enough to drill for oil, the burning of which will continue to worsen ice melt. 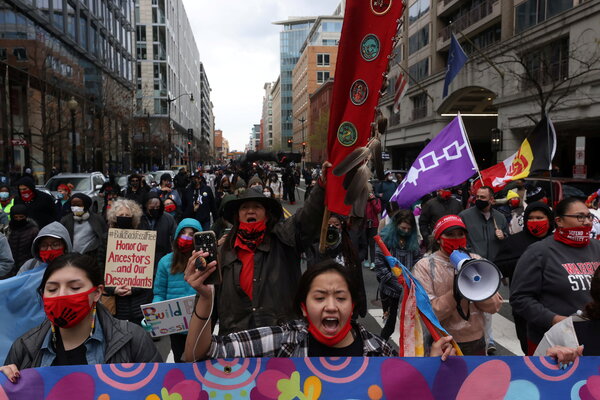 Earlier this month, lawyers for the Biden administration also opposed in court shutting down the Dakota Access pipeline, which is carrying about 550,000 barrels of oil daily from North Dakota to Illinois. The Standing Rock Sioux tribe and other activists have fought it for more than five years, contending the pipeline threatens water supplies and sacred sites.

The Biden administration could have decided to halt the pipeline while the Army Corps of Engineers conducts a new court-ordered environmental review, but it opted not to intervene. Judge James Boasberg of the U.S. District Court for the District of Columbia criticized the administration for its inaction.

Environmental activists, who campaigned to elect Mr. Biden, said this week that they were “baffled” and “disappointed” by the decisions but avoided criticizing the president.

Still, some said they were running out of patience with the distance between Mr. Biden’s climate policies and his actions at a time when scientists say countries need to quickly and sharply cut fossil fuel emissions or risk irreversible damage to the planet.

“These are bad decisions,” said Drew Caputo, a lawyer for the environmental group Earthjustice, which has fought the Trump administration policies that Mr. Biden is now defending. “These actions are carbon bombs.”

“I get that they’re being pressured politically. I get that there are thin margins,” he said. “But the climate crisis doesn’t care about any of that stuff.”

This month the world’s leading energy agency warned that governments around the globe must stop approving fossil fuel projects now if they want to keep the increase in average global temperatures below 2 degrees Celsius, compared with preindustrial levels. That’s the threshold beyond which scientists say the Earth will experience irreversible damage.

In its court filing regarding Willow, the government said the Trump administration adequately considered its impacts on fish, caribou and polar bear habitat. It also upheld the method used by the prior administration to account for the greenhouse gas emissions generated by the project.

“Conoco does have valid lease rights,” the filing states, noting that under law the company is entitled to develop its leases “subject to reasonable regulation.”

Amy M. Jaffe, director of the Climate Policy Lab at Tufts University’s Fletcher School of Law and Diplomacy, said she was not concerned that a handful of states are continuing fossil fuel production.

“To use an oil analogy, we’re not changing a steamboat. We’re shifting course of a giant supertanker. It’s not going to happen overnight,” Ms. Jaffe said, adding, “It’s a time-consuming and thoughtful process to move an entire country the size of the United States, with the complexity of the economy we have, to a major energy transition.”