A group of 16 Iraqi migrants – including women and children – have been picked up off the Kent coast.

They were questioned by Border Force officials after being found at Dover in the early hours of Tuesday morning.

All the migrants were ‘well’ and did not require treatment after being checked by medics.

Hundreds of migrants have made the perilous trip across the Dover Strait – the busiest shipping lane in the world – since last November. 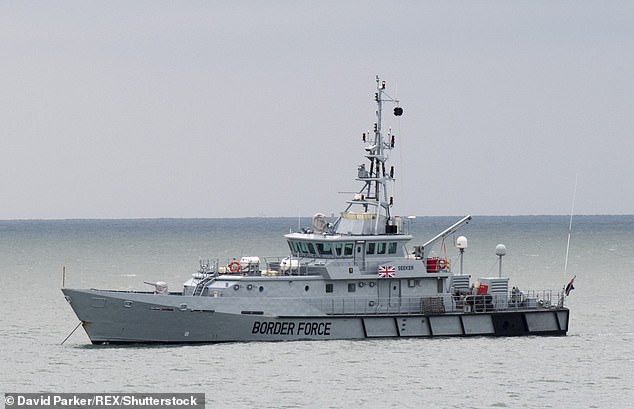 Hundreds of migrants have made the perilous trip across the Dover Strait – the busiest shipping lane in the world – since last November. Pictured: A Border Force patrol boat off the Kent coast

It comes after 18 asylum seekers were found in the back of a lorry on the M26 near the Brands Hatch racetrack in Kent last week.

The Eritreans – 11 men, six women and a child – were found in the German truck during a random stop.

It sparked Home Secretary Sajid Javid to haul in extra cutters in the Channel in a bid to tackle the problem.

Most of the migrants have been travelling in rigid-hulled inflatable boats, though the Home Office would not reveal what boat the latest group were on.

A Home Office spokesman said: ‘On Tuesday around 3am, a group of 16 people, made up of men, women and children, arrived at Dover Eastern Docks where they were medically assessed and found to be well.

‘The group were transferred to immigration officials for interview and all presented themselves as Iraqi nationals.

‘Anyone crossing the Channel – one of the busiest shipping lanes in the world – is taking a huge risk with their life.

‘Since the Home Secretary declared a major incident in December we have tripled the number of cutters operating in the Channel, agreed a joint action plan with France and increased activity out of the Joint Coordination and Information Centre in Calais.’

Last night eight migrants – all men – were found in the back of a lorry in Runcton, Chichester, West Sussex.

The driver heard banging in the vehicle and police were called.

All the men were arrested on suspicion of illegal entry into the UK and were still in custody today.