Have you found yourself wondering why the election campaign is so dull so far, if it’s caught your attention at all? True, you wouldn’t call either of the two main leaders charismatic. But it’s more than that. Each party has taken a technical approach to the structure of its campaign, and enacted it mechanically.

And they’ve drawn the specifications from the same political manual. The manual specifies a stereotype for each party. 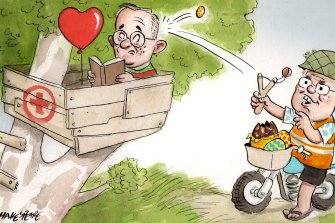 The Liberal Party stereotype is that it’s strong on economic management and national security. Scott Morrison played to it. His week was all about the economy. He visited a factory, workplace or industrial site of some kind every day and announced an intention to create 1.3 million jobs over five years.

Earlier generations tagged this political stereotype the “daddy” template, the breadwinner who also protected the home.

The Labor Party stereotype is that it’s strong on health and education. Anthony Albanese played to it. His week was all about healthcare. He visited some sort of health-related facility every day and announced a plan to create 50 new clinics for urgent care.

Earlier generations called this political stereotype the “mummy” formula, the caregiver and nurturer.

The big policy announcements were pretty junky. Morrison’s jobs “pledge” is just a projection based on normal growth trends, as economists pointed out.

Albanese might want to create 50 new urgent care clinics, but there still won’t be enough doctors to staff them, as the Australian Medical Association pointed out.

The parties don’t care. They need an excuse to get some media coverage of their candidate saying something to reinforce their particular party image.

Which is why reporters have to make their own fun by asking “gotcha” questions. Such as, what’s the unemployment rate, Mr Albanese? 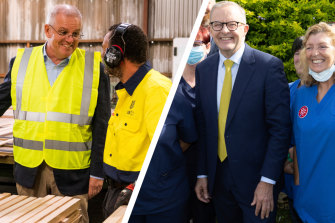 It wouldn’t be a gotcha question, of course, if he knew the answer. Albanese should have known it. Even if he’d not seen it anywhere else, he would have heard Morrison cite it – 4 per cent – when he called the election just one day earlier. And he tells colleagues he did know it. He simply had a mental blank.

It was a bad one. Worse, by taking a wild stab – 5.4 per cent? – Albanese fed so readily into the Liberal typecasting: “Trust the Liberals for a strong economy; don’t trust Labor.” Albanese did the government’s work for it.

Albanese tried to turn an economic fail into an integrity win. He quickly admitted error – “I’m human” – and obliquely attacked Morrison: “I won’t blame someone else, I will accept responsibility.”

Question: Does Albanese’s blunder change the course of the election? Answer: It depends on what he does next.

No one remembers that Kevin Rudd failed a “gotcha” question in 2007. How many personal income tax brackets are there? Rudd didn’t know. But he went on to win the election handsomely.

Albanese is not Rudd. In 2007, Rudd’s poll ratings were in minor rock star category, and the electorate saw him as a competent leader with a clear agenda on climate change, an apology to Indigenous Australia, a plan for hospitals, a proposed NBN. And Labor had spent money to advertise Rudd as a fiscal conservative.

Albanese is relatively unknown with lukewarm positive ratings. His mental blank is now shaping public perceptions of him. It’s had a measurable short-term impact.

The Liberal Party’s director, Andrew Hirst, on Friday morning told the leadership group that internal tracking polling showed that the salience of the economy as a campaign issue had risen during the week, and that doubts about Albanese’s leadership had risen with it.

The Liberals will continue running the economy theme hard next week. They’ll be trying to drive home the doubts about Albanese.

For the Liberals, campaigning on their party typecast could well be enough to win the election. They are lumbered with an unpopular leader. Their first TV ad, which aired on Thursday, implicitly acknowledged this. Morrison was visible in the 30-second ad for just six seconds, for four of those wearing a face mask, and he was not heard once. The only speech was a female voice-over.

The Liberals always planned a negative campaign. Albanese has given them the gift of fresh material.

Why is it enough for the Liberals to campaign on a “daddy party” stereotype? Because it so happens that their two areas of perceived strength – economic management and national security – are the unique and irreducible responsibilities of the national government.

The national government is not the main supplier of health and education; that responsibility overwhelmingly sits with the states in our federal arrangements. Labor holds power at the state level more often, in more states, for this exact reason. The key state-level services just happen to be in Labor’s perceived areas of strength.

If Labor fails to address the problem of perceived economic feebleness, if it sticks with its stereotype-based campaign, it could very well be a fatal misjudgment.

Fair or unfair, the reality is that the Liberals can win federally by emphasising their “daddy party” character alone. Labor cannot. It needs to play up the perception that it is superior on health and education, and also assure the country that it is competent in economic management and national security, that it is fit for national government. In short, Labor wins by campaigning as both “mummy and daddy”.

At the outset, Labor was well aware of Albanese’s vulnerability on the economy. That’s why, in Labor’s first TV ad, even before the campaign began, Albanese assured Australia that he had an economics degree from Sydney University [still shot of impressive sandstone clock tower and quadrangle] and had been infrastructure minister for six years.

That was not enough to win from a standing start, and it’s certainly not enough to win now. Labor needs to venture out of its safe zone and be brave enough to lay claim to the unique national responsibilities of economic management and national security.

And why not? The Liberals are vulnerable on both. Their core competencies are perceived, not empirical. All of the party stereotypes, Labor and Liberal, contain some elements of truth, but don’t actually need to be evidence-based. They’re more faith than fact.

The most sophisticated analysis of parties according to their perceived type was created by Mark Textor for the Liberals’ pollsters of choice, Crosby Textor, in the early 1990s. It uses a graph, with X and Y axes dividing it into four boxes or quadrants. It burst into public notice with a 2007 campaign leak showing John Howard’s losing trajectory.

The Textor grid, roughly speaking, shows the political themes that are “owned” by the respective parties, measured against how salient those areas are in the electorate at any given moment.

Textor has described his grid as something like a battle map. It shows the electoral landscape. Good political generals use the map to illuminate where they can best advance their own strengths and attack the opponent’s weaknesses. It’s supposed to be a dynamic tool to guide combat.

Because it worked for Howard most of the time it took on the status of a sacred parchment. The parties recently have misused it as a static tool, to map their strengths but then stick with them, not venturing into hostile territory.

The result is a dull, mechanical campaign, dependent on blunders and the minor parties for any dynamism. It’s become a campaign prison. At the moment, Labor is campaigning as if it is trying to hold on to a lead by holding to its conventional areas of advantage. It does have a lead in the polls, but that’s an abstract. It needs to translate its lead into seats or it’s useless.

Used properly, the Textor grid would guide the leaders to much more adventurous moves. To hit each other’s territories rather than just patrol their own.

Labor might reframe its supposed weakness on the economy as a strength. By defining it not as statistics but by how the economy works for you, the ordinary voter, and asking the hard questions about why real wages keep falling, for example.

Why wouldn’t Albanese visit women’s refuges to campaign against domestic violence, wordlessly reminding the electorate of the Morrison government’s problems delivering justice for women? Or stir memories of Morrison’s trust problem by campaigning in sites redolent of his broken promises?

Election campaigns should be dull? That’s just a stereotype.

Jacqueline Maley cuts through the noise of the federal election campaign with news, views and expert analysis. Sign up to our Australia Votes 2022 newsletter here.