Boris Johnson will today lead British tributes to the victims of 9/11, amid tension in the special relationship in the wake of the chaotic withdrawal from Kabul.

In a video message to be played at a memorial event in London, the Prime Minister warned the terrorist threat ‘persists’ – although they had failed to ’cause us to abandon our values, or to live in permanent fear’.

And he said last month’s events in Afghanistan should strengthen the West’s determination to ‘hold fast to our belief in liberty and democracy, which will always prevail over every foe’.

He will mark the 20th anniversary of the attacks on the Twin Towers in New York from his official country residence.

The message will be played at a memorial event organised by the ‘Since 9/11’ organisation at the Olympic Park. The terrorist outrage killed 67 Britons out of nearly 3,000 in total. 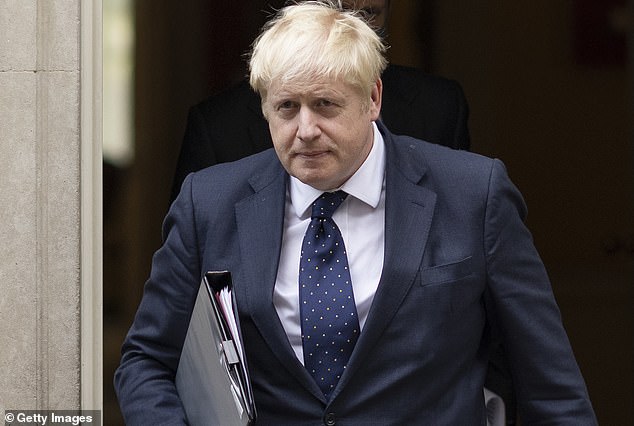 In a video message to be played at a memorial event in London, the Prime Minister warned the terrorist threat ‘persists’ – although they had failed to ’cause us to abandon our values, or to live in permanent fear’ 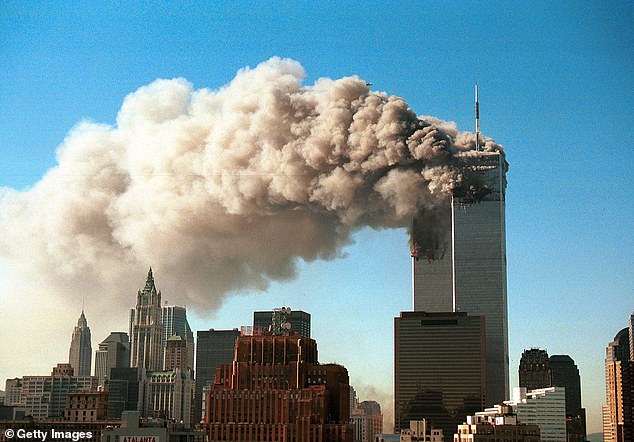 Smoke pours from the twin towers of the World Trade Center after they were hit by two hijacked airliners in a terrorist attack September 11, 2001

Mr Johnson said: ‘On a crystal clear morning, terrorists attacked the United States with the simple goal of killing or maiming as many human beings as possible, and by inflicting such bloodshed in the world’s greatest democracy, they tried to destroy the faith of free peoples everywhere in the open societies which terrorists despise and which we cherish.

‘And it is precisely because of the openness and tolerance of the United States that people of almost every nationality and religion were among the 2,977 murdered on that day, including 67 Britons, each of them a symbol of the eternal friendship between the United Kingdom and the United States.

‘But while the terrorists imposed their burden of grief and suffering, and while the threat persists today, we can now say with the perspective of 20 years that they failed to shake our belief in freedom and democracy; they failed to drive our nations apart, or cause us to abandon our values, or to live in permanent fear.’

He added: ‘The fact that we are coming together today – in sorrow but also in faith and resolve – demonstrates the failure of terrorism and the strength of the bonds between us.

‘The United Kingdom promised our American friends that we would be proud to receive a memorial, forged from the twisted steel of Ground Zero and display it permanently in the Olympic Park in London, which symbolises freedom and openness, the exact reverse of what the killers stood for.

‘Recent events in Afghanistan only strengthen our determination to remember those who were taken from us, cherish the survivors and those who still grieve and hold fast to our belief in liberty and democracy, which will always prevail over every foe.’

A spokesman for the Prime Minister said Mr Johnson would not be attending the memorial in New York in person on Saturday, but would ‘mark the anniversary at home’ as he works from Chequers this weekend.

Asked whether Mr Johnson was invited to visit New York – the city of his birth – as part of commemorations, the spokesman said: ‘I believe our ambassador in Washington will attend the memorial event in New York and lay a wreath.’ 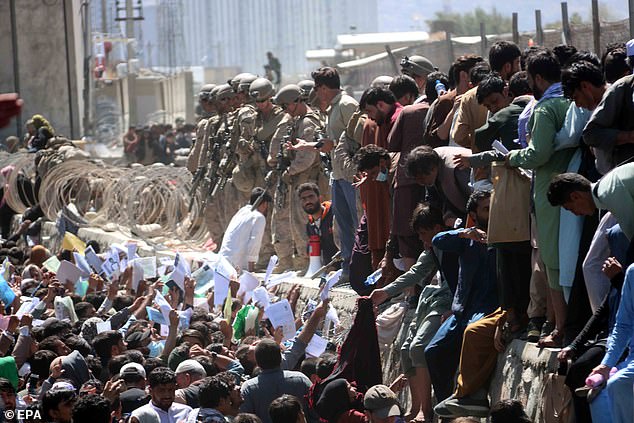 Afghans struggle to reach the foreign forces to show their credentials to flee the country outside the Hamid Karzai International Airport, in Kabul, Afghanistan, 26 August 2021

Meanwhile Jack Straw has said the West’s ‘fundamental mistake’ in Afghanistan was its belief that the Taliban was ‘out as well as down’.

Writing in House magazine, Mr Straw – who was foreign secretary at the time of the Nato invasion of Afghanistan in 2001 – said: ‘There were other errors. One was trying to pursue counter-terrorist and counter-narcotics strategies at the same time.

‘Tens of thousands of Afghan farmers depend on poppy production for their (meagre) livelihood, to meet the insatiable demand for heroin from the West. In the absence of viable alternative crops, eradicating poppy production was a recruiting sergeant for the Taliban.’

He added: ‘As for the future, military planners and historians will need to learn from our errors.

‘The US will need the painful lesson (not for the first time) that it is hearts and minds which ultimately wins a peace, not fire-power. And we will all have to swallow hard, and deal with the Taliban unless and until that becomes impossible.

‘International pressure, and aid, will both be necessary, not least if girls are to continue to be educated and women to work.’