The prime minister would often hand out his private number to world leaders when he was foreign secretary, sources said, with one insisting they were ’99 per cent sure’ Mr Johnson had sent messages to the Saudi royal using the messaging service.

It is alleged that bin Salman was involved in hacking Amazon founder Jeff Bezos’ phone over WhatsApp, sending a corrupt video that granted access to his device.

Four sources told the Daily Telegraph they suspected Mr Johnson may have used WhatsApp to communicate with bin Salman, with one ex-Foreign Office source saying: ‘He certainly had his number and would ping him the occasional message.’

Mr Johnson’s press secretary said: ‘It’s not something we would comment on.’ 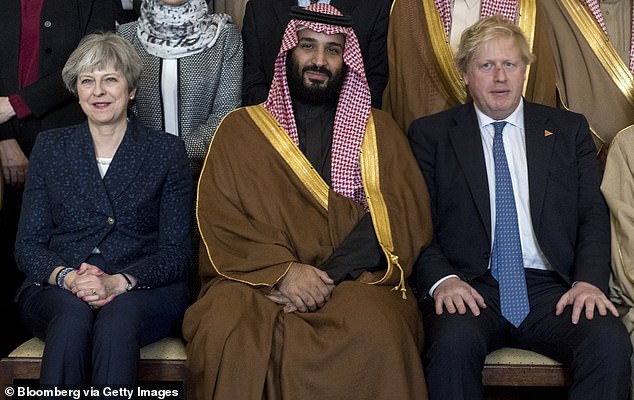 Then Foreign Secretary Boris Johnson is pictured with Mohammed bin Salman and former Prime Minister Theresa May ahead of a meeting inside 10 Downing Street on March 7, 2018 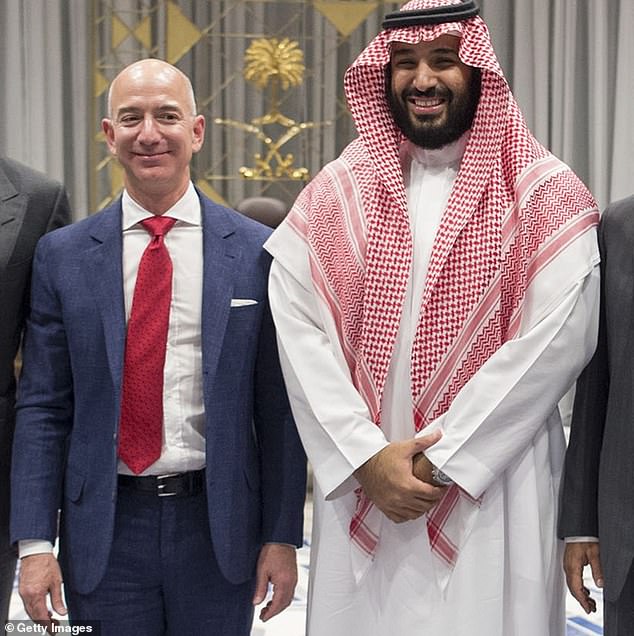 It is alleged that bin Salman was involved in hacking Amazon founder Jeff Bezos’ phone over WhatsApp, sending a corrupt video that granted access to his device (both pictured in Riyadh, Saudi Arabia, November 2016)

One British source, who had an overlap with Mr Johnson in government, said they remembered hearing he had talked about messaging the Saudi royal over WhatsApp.

Another former Foreign Office source said talking with Middle Eastern figures using the messaging app was ‘commonplace’, adding they ‘wouldn’t be surprised’ if Mr Johnson had done so with bin Salman.

A fourth source said that during Mr Johnson’s tenure as foreign secretary between July 2016 and July 2018 he would often hand out his number to overseas counterparts.

It was also reported the UK ambassador to Saudi Arabia Simon Collis is understood to have shared messages over WhatsApp with the crown prince. 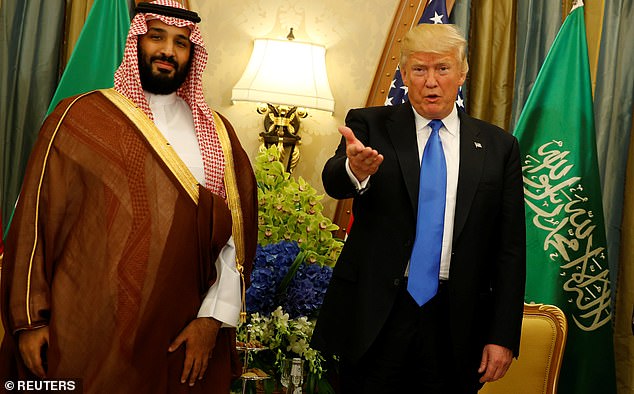 The Saudi crown prince and Bezos exchanged phone numbers at a Hollywood dinner in April 2018, and on May 1 bin Salman reportedly sent him a WhatsApp video containing imagery of Swedish and Saudi Arabian flags draped over one another with Arabic lettering written across them.

HOW THE ‘HACK’ OF JEFF BEZOS’S PHONE UNFOLDED

April 2018: The crown prince attends a dinner in Hollywood hosted by producer Brian Grazer where he meets Jeff Bezos

May 1: The video is sent from the prince’s phone to Bezos’ via WhatsApp

January 2019: The National Enquirer publishes its expose on Bezos’ affair with Lauren Sanchez

January 2020: The Guardian reports that the prince’s message was the source of the hack. A UN report comes to the same conclusion

Bezos’s team say that video was the Trojan horse that hacked the billionaire’s phone.

Ex-UK Foreign Office insiders have said today’s generation of Middle Eastern royalty ‘love their phones’ and British ministers will use WhatsApp to stay in contact.

The communications mean British government phones could be vulnerable to hacking, but a security expert played down these fears.

Former UK national security adviser Sir Mark Lyall Grant said that prime ministers he worked with were ‘fully aware’ that those forms of communication were ‘not 100 per cent secure’, and most text or WhatsApp messages were relatively short in his experience.

Mr Johnson had written a positive opinion piece about the young Saudi for The Times in 2018.

The Daily Telegraph established the use of WhatsApp communication between Middle Eastern figures and British officials by contacting a dozen current and ex-UK government figures.

The ex-ambassador to the United States, Sir Kim Darroch, is understood to have not been communicating with bin Salman over WhatsApp.

Sources claimed former prime minister Theresa May did not regularly use WhatsApp but David Cameron made a habit of sending texts to politicians.

The Prime Minister’s official spokesman told The Telegraph they had ‘no idea’ whether Mr Johnson had communicated with bin Salman using WhatsApp, and his press secretary said they would not comment on the security arrangements of ministers.