London: Boris Johnson, with just two weeks remaining as British prime minister, has staged a surprise visit to Kyiv for a third time, urging Europeans to bear higher gas bills because Ukrainians are “paying in blood”.

Forced to resign in July amid widespread mutiny within his ministry and on the Conservative Party backbench, Johnson issued a rallying cry to whomever succeeds him as leader on September 5 that what happens in Ukraine “matters to us all”. 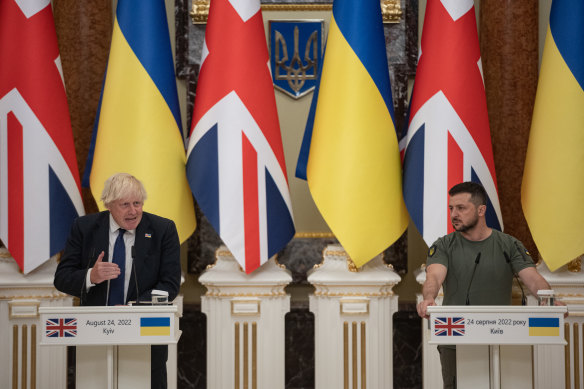 His visit to meet with counterpart, Ukraine’s President Volodymyr Zelensky, marked 31 years since the nation’s independence from Soviet’s rule and six months since Russian dictator Vladimir Putin launched an invasion.

“This war can end in the only way – Ukraine will win. And Great Britain will stand by your side,” Johnson said, announcing £54 million ($92 million) in further support to the war torn country’s military, including unmanned surveillance and missile systems.

“What happens in Ukraine matters to us all, which is why I am here today to deliver the message that the United Kingdom is with you and will be with you for the days and months ahead, and you can and will win.

“There’s a strong will of Ukrainians to resist. And that is what [President] Putin failed to understand. You defend your right to live in peace, in freedom, and that’s why Ukraine will win.” 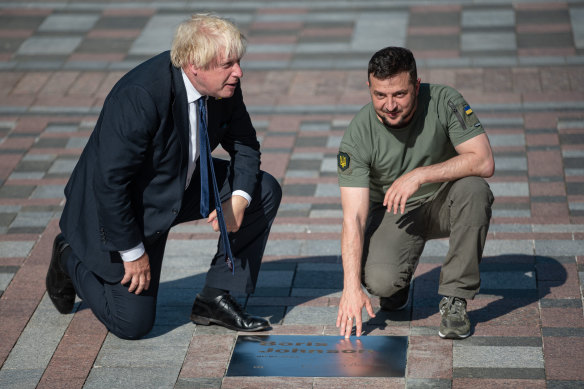 The war has claimed the lives of 5587 civilians in Ukraine, according to the UN High Commissioner for Human Rights, but the true number is believed to be in the tens of thousands.

The number of refugees has surpassed 6.6 million while about 9000 Ukrainian soldiers and as many as 25,000 Russian soldiers are said to have been killed.

The destruction has cost Ukraine at least $113.5 billion, and it may need more than $200 billion to rebuild

Johnson became the first major world leader to travel to the country after the Russian invasion when he went by train to Kyiv in April. He returned in June. His latest visit coincided with US President Joe Biden announcing a record $3 billion arms package. 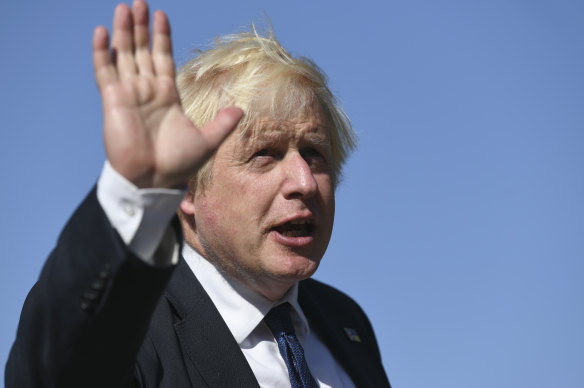 Boris Johnson waves during his meeting with Volodymyr Zelensky.Credit:AP

Zelensky said that Ukraine had a friend in Johnson that “not everyone is lucky enough to have”.

He was presented with the Order of Liberty – Ukraine’s highest award that can be given to foreign nationals – while Zelensky also unveiled a plaque for the UK prime minister on the “alley of bravery” outside the Ukrainian parliament.

But the British government remains concerned that European support for Ukraine’s battle against Russia could dry up amid the cost-of-living crisis, with diplomats travelling throughout the continent in the past few days to make the case against cutting aid to Kyiv.

In the UK, the inflation rate is forecast to hit a 42-year high of 13.3 per cent this year, while the economy is expected to shrink for more than a year.

European governments were said to be increasingly concerned about spending on arms and humanitarian supplies as citizens face rocketing energy prices.

“While people are paying energy bills, people in Ukraine are paying with blood,” he said.

Despite his unpopularity in Britain following a spate of sex and integrity scandal within his government, Johnson has won worldwide plaudits for unflinching support of Ukraine since Russia’s invasion.

In July, the mayor of Black Sea port city Odesa, made Johnson an honorary citizen. A number of Ukrainian towns and villages have already announced plans to unveil Boris Johnson streets, while a Kyiv cafe is serving a Boris Johnson croissant, complete with a vanilla ice cream topping in homage to his signature mop of blond hair.

His recognisable hairstyle is the subject of both gallery paintings and street art, where his name has been Ukrainianised to Boris Johnsonyuk. During Eurovision, the Ukrainian team dubbed him “our best friend”.

A poll published by UK peer Lord Ashcroft on June 28 gave Johnson a 90 per cent favourability rating among Ukrainians, making him the most popular foreign politician in the country and placing him just 3 per cent behind Zelensky. Support for Johnson was more than double that of French President Emmanuel Macron and German Chancellor Olaf Scholz.

The Kremlin in return labelled Johnson as the Russian public enemy number one and “most anti-Russian leader” in the world.

From the start of the war Johnson and Zelensky struck up a close personal friendship, regularly speaking by telephone, each praising the other’s bravery.

However, some of Johnson critics accused him of using their bond at times to distract from his own domestic woes.

Downing Street published details of Johnson’s phone calls with the Ukrainian president often during moments of maximum crisis for the prime minister.