Boris Johnson won’t ‘lecture’ India over the country’s ties to Vladimir Putin’s Russia – despite concerns among ministers that New Delhi has not been strong enough in condemning the invasion of Ukraine.

The Prime Minister is due to travel to India this week and will meet with his counterpart, Narendra Modi, on Friday for talks.

At a Cabinet meeting today, Mr Johnson said he would use the trip to expand Britain’s ‘deep and long-lasting partnership’ with India.

He also promised to continue his push for countries to cut their economic ties with Russia, as part of efforts to starve Mr Putin of cash to fund his war machine.

Concerns have been expressed that India’s failure to wholeheartedly condemn Russia for the conflict in Ukraine are due to the country’s economic, diplomatic and military links with Moscow.

Downing Street said the PM told Cabinet ministers this morning that the UK would ‘continue to work with other countries to provide alternative options for defence procurement and energy for India to diversify supply chains away from Russia’.

However, Mr Johnson said Britain ‘would not seek to lecture other democratically elected governments on what course of action was best for them’.

The PM’s official spokesman also suggested Mr Johnson would use a carrot rather than a stick in his talks with Mr Modi. 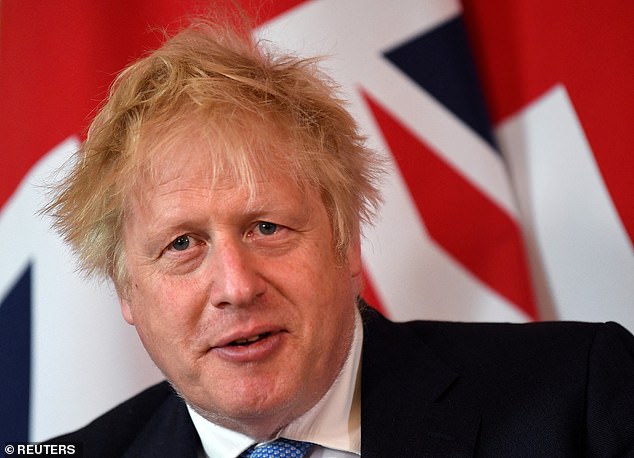 The Prime Minister is due to travel to India this week and will meet with his counterpart, Narendra Modi, on Friday for talks 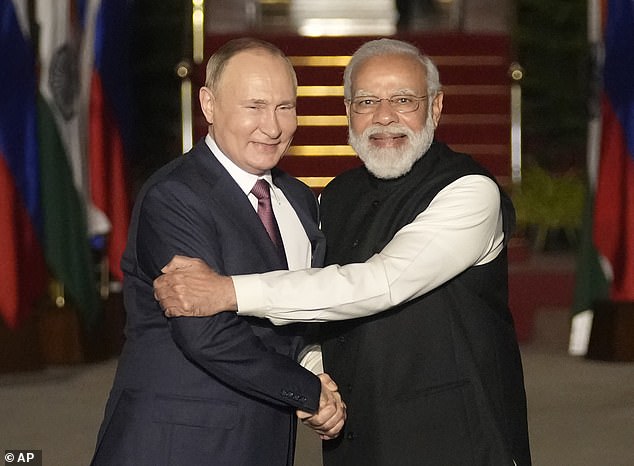 Mr Modi met with Vladimir Putin in December last year. Concerns have been expressed that India’s failure to wholeheartedly condemn Russia for the conflict in Ukraine are due to the country’s economic, diplomatic and military links with Moscow

‘When it comes to India and other democratically elected countries we think the best approach is to engage with them constructively, to try to broaden the alliance of democratic states against Russia,’ the spokesman said.

‘We do not think that pointing fingers or shouting from the sidelines are effective ways of engaging with democratically elected countries.’

One of Mr Johnson’s Cabinet ministers had earlier expressed frustration at India’s stance over Russia’s brutal military assault on its neighbour.

‘India has not yet come out as strongly as some of us would like to see about Ukraine,’ Northern Ireland Secretary Brandon Lewis told the BBC.

India has repeatedly abstained in United Nations votes censuring Russia over its invasion of Ukraine.

It also this month stopped short of blaming or naming Russia in its condemnation of atrocities carried out in Bucha, near Ukraine’s capital Kyiv.

The US recently called on India scale down its dependence on Russian military equipment.

The PM’s trip to India comes after his visit to Kyiv earlier this month to meet Ukrainian President Volodymyr Zelensky.

Last month, Mr Johnson visited the UAE and Saudi Arabia to encourage them to ramp up their production of oil, as Western nations look to wean themselves off Russian energy supplies.