Schoolboy, 13, is put in isolation in a room ‘like a prison’ after wearing SHORTS during the heatwave, father claims, as he blasts academy’s uniform policy

A schoolboy claims he was placed into isolation after turning up to class wearing shorts during this week’s sweltering heatwave.

Harrison Utting, 13, says he was sent to a special room as punishment for attending Westlands School in Sittingbourne, Kent, in a pair of knee-length shorts on Monday morning.

His dad Terry Utting, from nearby Sheppey, took him out of school on Monday and yesterday when the boy again turned up in shorts.

Mr Utting, who runs a vape shop, said his son was taken into the school’s Pastoral Support Programme room, which he described as ‘like a prison’.

Mr Utting criticised the school for banning shorts and taking disciplinary action on his son when the country is hit by record high temperatures.

He added: ‘I don’t think it’s right the way the school is treating its students.

‘There is a blanket ban on shorts but there is no air-conditioning in the classrooms and the pupils are roasting in 30C (86F) heat. 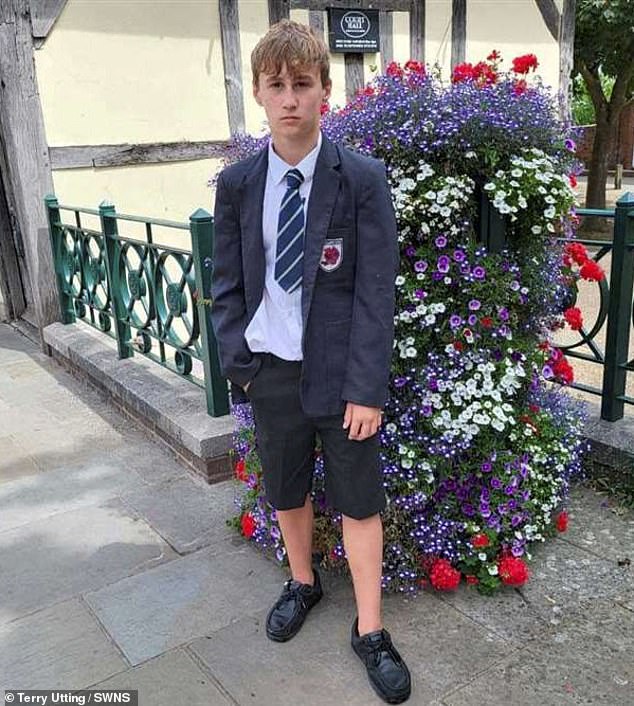 Harrison Utting, 13, says he was put into isolation for turning up in shorts at Westland School in Sittingbourne, Kent, during a week of unusually high temperatures 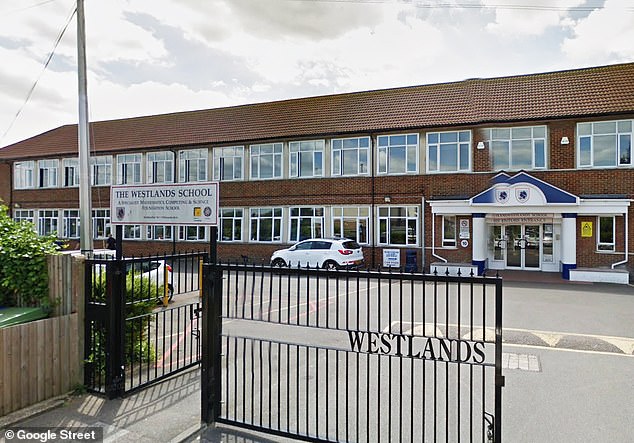 Westlands School (pictured) in Sittingbourne, Kent, has stood by its strict uniform policy, but said this may change if the searing heatwave engulfing the country continues

‘At least the girls can wear skirts.

‘I read that in another school all the boys ended up wearing skirts as that was the only way they could keep cool and follow the dress code.’

The Met Office yesterday extended its amber warning over the ‘extreme heat’ until next Tuesday as temperatures are expected to rise again this weekend, hitting the high 20s and could reach as high as 35C (95F).

The school stood by its strict uniform policy, but said this may change if the searing heatwave engulfing the country continues, as is expected by forecasters.

Head teacher Christina Honess said: ‘We have a clear policy on uniform that all parents are made aware of before they send their child to our school and it is published on our school website.

‘We review all of our policies on a regular basis and will do so with our uniform policy in due course. 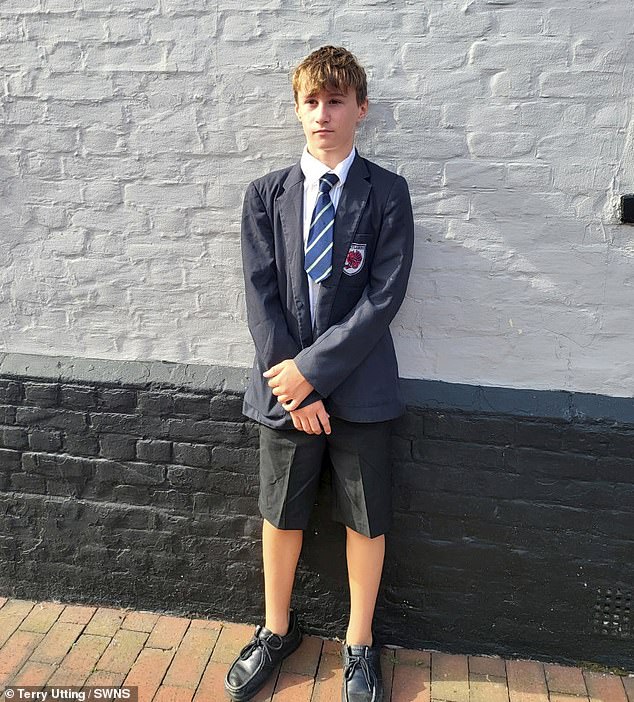 Harrison’s father Terry Utting said: ‘There is a blanket ban on shorts but there is no air-conditioning in the classrooms and the pupils are roasting in 30C heat’

‘The overwhelming majority of our parents are supportive of our current policy.

‘In the event of the extreme temperatures that are currently being forecast for next week, we would be willing to make reasonable adjustments.’

The National Union of Teachers (NUT) advises that steps such as closing classrooms can be taken if it becomes unacceptably hot and classes can be moved to cooler locations, or even pupils being sent home.

The union safety briefing states that 26C (78F) should be used as the trigger for these measures and that ‘dress codes can also be relaxed’, with many schools that need blazers and trousers to be worn to allow shorts, skirts and the removal of jackets.