Five volunteer counsellors at Australia’s largest breastfeeding support group have left their roles after colleagues complained about social media posts that allegedly included “near obsessive use of the word mother”.

Seven long-term volunteers were investigated by the Australian Breastfeeding Association (ABA) after allegedly repeatedly commenting on social media posts using terms such as “mother” or “breastfeeding” even if the original poster had used “parent” or other gender-neutral language.

Five of the women left the organisation between November and February after the months-long complaints process. Two of them were removed from their roles by the association.

According to documents seen by The Age and The Sydney Morning Herald, the complainants said they were caused harm and believed “the near obsessive use of the word mother suggests that others are not welcome in the ABA”.

The investigations prompted 37 association members, including two former board members, to write to the association’s board stating the complaints were “frivolous and unjustified”. The members called for an external investigation and an apology to those being investigated.

“This treatment of the seven volunteers falls below the reasonable standard of care that any workplace should provide,” the letter said. 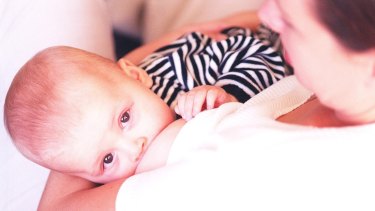 The Australian Breastfeeding Association has “resigned” counsellors after investigating complaints about their patterns of using “mother-to-mother” language on the group’s social media.Credit:Belinda Pratten

The association has been considering the continued relevance of traditional “mother-to-mother” communications this year as it develops its new language policy.

A source with knowledge of the draft policy said it retains more sexed language about mothers and breastfeeding than has been kept by other large, international breastfeeding support groups.

Words such as “mother” and “breast milk” are expected to be retained, but some desexed language, such as chestfeeding, will also be adopted to ensure parents who do not wish to identify as mothers are safely welcomed and included.

Of the seven counsellors investigated, two had complaints upheld and were involuntarily removed from their volunteer duties, one was put on probation but has since been allowed back, one left of her own volition, and the last was removed for inactivity this year.

One counsellor was investigated after posting under an Australian Breastfeeding Association Facebook meme: “I am so grateful to NMAA mums who taught me about normal infant behaviour, without other mothers it would have been so difficult.” The association was previously called the Nursing Mothers Association of Australia.

Association executive officer Victoria Marshall-Cerins said the board had “found certain conduct of certain counsellors that was alleged to constitute intimidation and bullying or conduct that contravened its code of ethics and constitution”.

She said the complaints had involved “allegations regarding the conduct of a number of volunteers towards others, not the use of the word ‘mother’” .

This refers to how much the women posted and replied to others’ posts, and to the fact comments were seen to “correct” other counsellors’ use of terms such as “parent”.

Volunteers had been asked not to touch on issues of gender identity on the association’s national social media pages.

The Australian Breastfeeding Association is the latest in a series of global breastfeeding and maternal and infant care organisations, including the world’s biggest, La Leche League, to experience internal tension and dissent over the use of words to describe those who have and feed babies.

In August, La Leche League leaders from 45 countries wrote to its board warning that changes to its language policy, to use terms like “human milk” instead of “breast milk being implemented across its groups in 89 countries, meant the views and needs of some countries were not being considered. They dubbed these “oppressive and colonialist actions”.

“This is new territory, and even government departments and universities have been struggling with this [language concerning female reproduction],” she said.

Women who did not have English as a first language or had low education or literacy and are “broadly speaking least likely to breastfeed” must be able to understand resources, she said, and Munzer warned that making generally targeted information more complex with words such as “lactating parent” or “human milk feeding” could cause them to struggle to comprehend.

Professor Hannah Dahlen, the associate dean, research and midwifery lead in the School of Nursing and Midwifery at Western Sydney University, said it was important in a multicultural society that new parents were not confused by language they couldn’t understand or with which they couldn’t relate.

“That is insensitive in itself,” she said. “The solution is let’s work with individuals and find out what they want to be called and want these terms to be identified as, and let’s create individual material for them to make sure we are inclusive. If we change the language for everybody, we’re going to find confusion added.”

The LGBTQ health promotion agency ACON was contacted for comment but had not replied prior to publication.