Britain’s daily Covid deaths HALVE in a week to 56 while cases fall by 25% with 4,040 more infections

Department of Health data showed 56 Covid deaths were recorded, down 50 per cent on the 112 fatalities registered last week. This was the lowest number on a Tuesday since September 22.

Another 4,040 Covid cases were also announced by health chiefs, which was a drop of 25 per cent on the 5,379 detected at the same time last week.

It comes after the Office for National Statistics today revealed Britain had crossed the grim milestone of recording more than 150,000 deaths from the virus since the first cases were reported in early March.

They said as many as 150,116 death certificates registered between the start of the pandemic and March 19, the latest available, mentioned the virus.

But Covid deaths have been in a downward spiral since the second wave peaked in January when there were almost 1,500 virus victims being recorded every day. For comparison, the figure has now dropped below 100.

Britain has suffered the worst Covid death toll in Europe, and the fifth worst in the world, since the virus emerged in December 2019. Experts say this is linked to the rapid spread of the more infectious Kent variant in December, as well as the failure to protect care homes during the first wave.

Boris Johnson is hoping the mass vaccination drive — which has jabbed more than 30million Britons — will fend off any further waves of the virus. But scientists warn the emergence of new variants that may be able to dodge vaccine-triggered immunity could dent the roll-out.

The Office for National Statistics publishes weekly Covid fatality counts after sifting through death certificates to identify those that mention the virus, leading to a delay of up to two weeks in their figures. This count includes both suspected and confirmed Covid deaths.

The Department of Health, however, publishes daily death tolls from the virus based on people who die within 28 days of testing positive. Its death toll stands at 126,615. 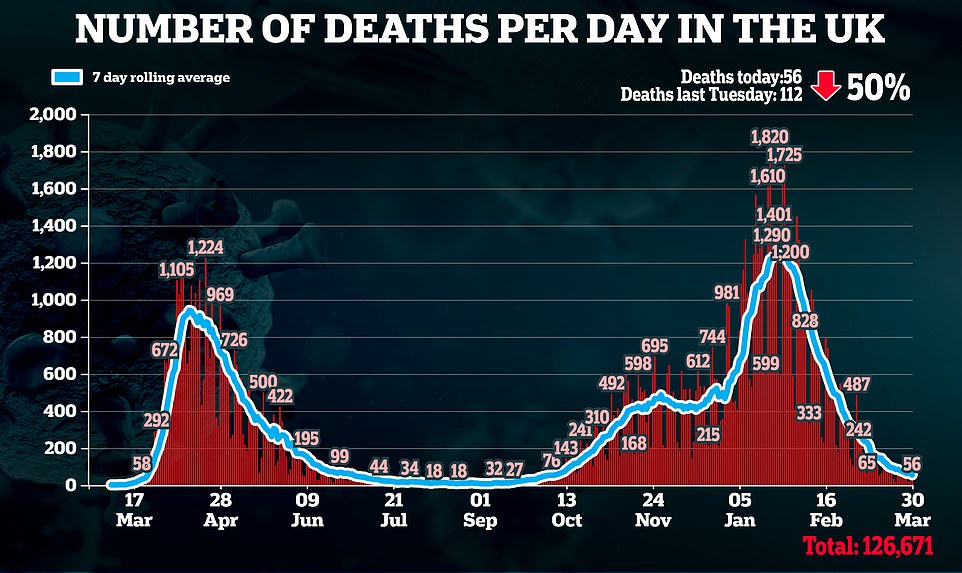 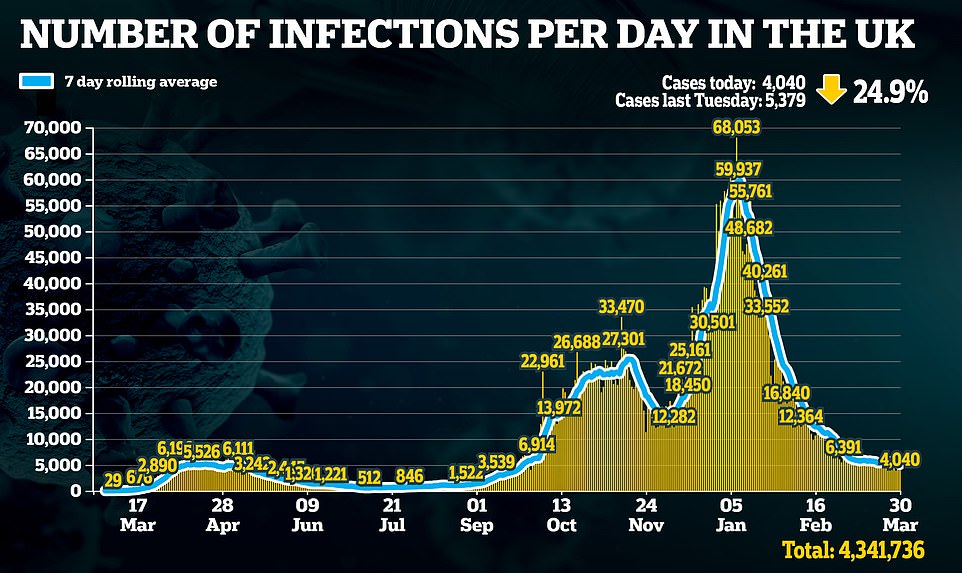 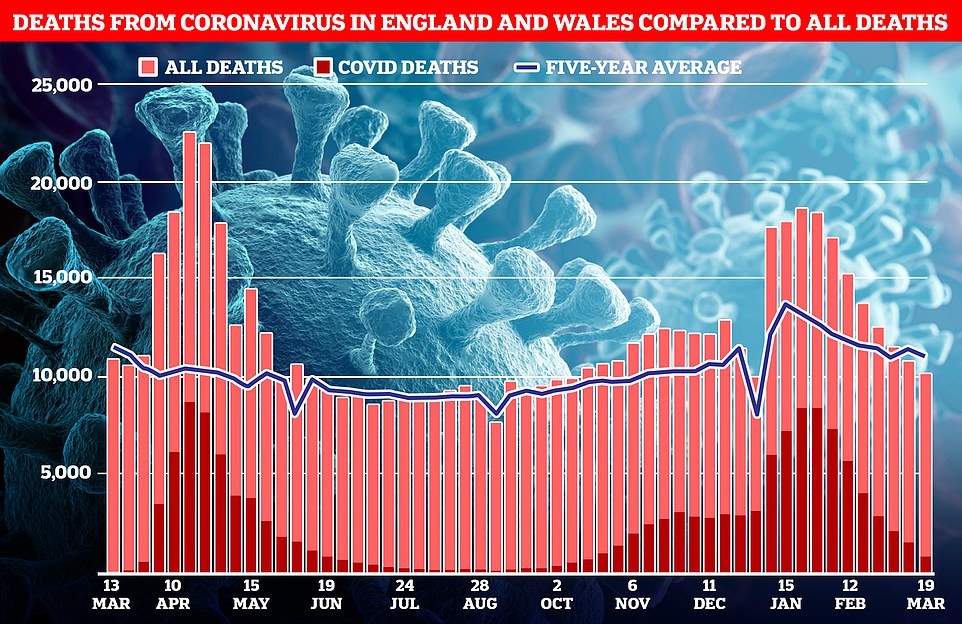 Promising statistics show Covid deaths in England and Wales have dipped below 1,000 for the first time since October. Deaths from all causes – including dementia, heart disease and the virus, also remained below average 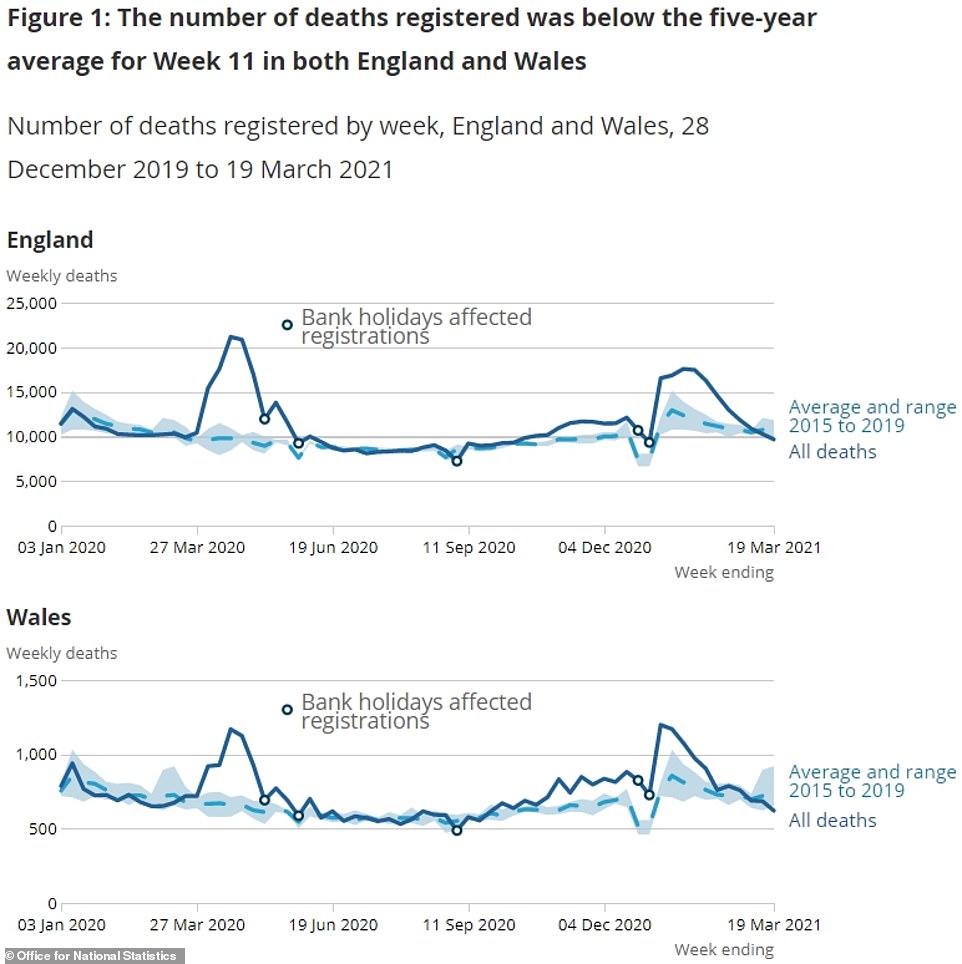 The number of deaths from all causes has remained below the number expected for the second week in a row. Statisticians said this was possible because more people have died earlier than expected due to the virus 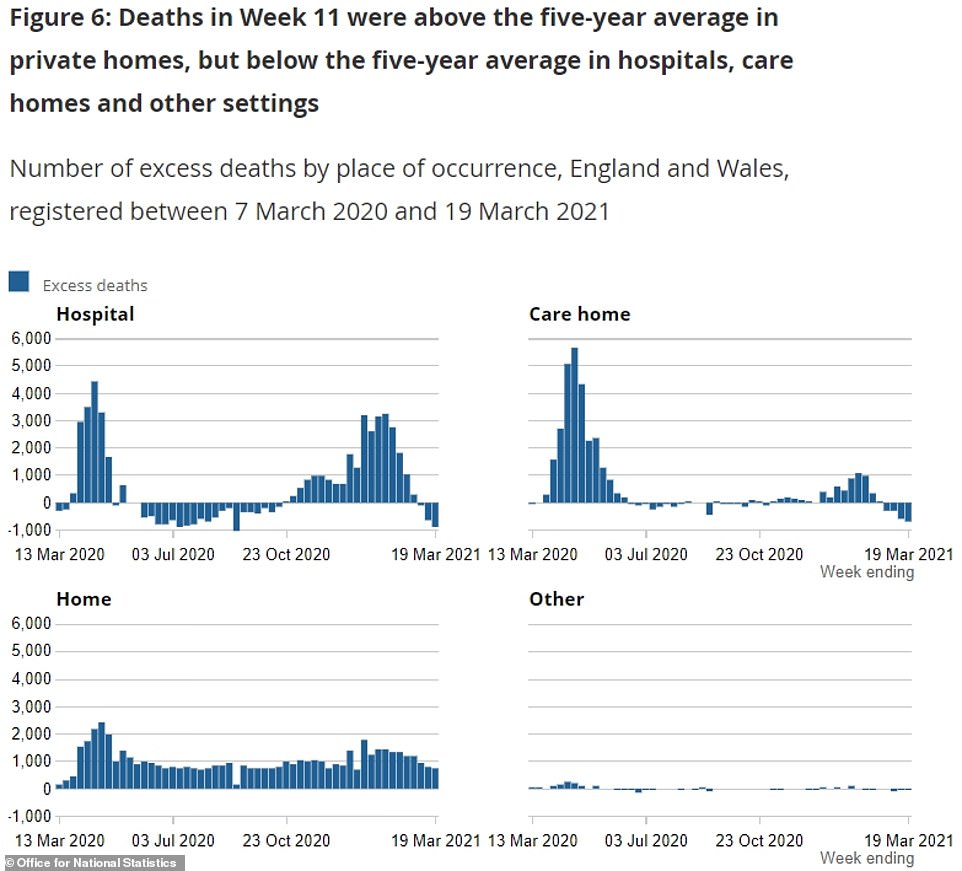 Deaths among care home residents linked to the virus have also halved in two weeks, figures showed. There were 195 recorded in the week to March 19, the most recent available 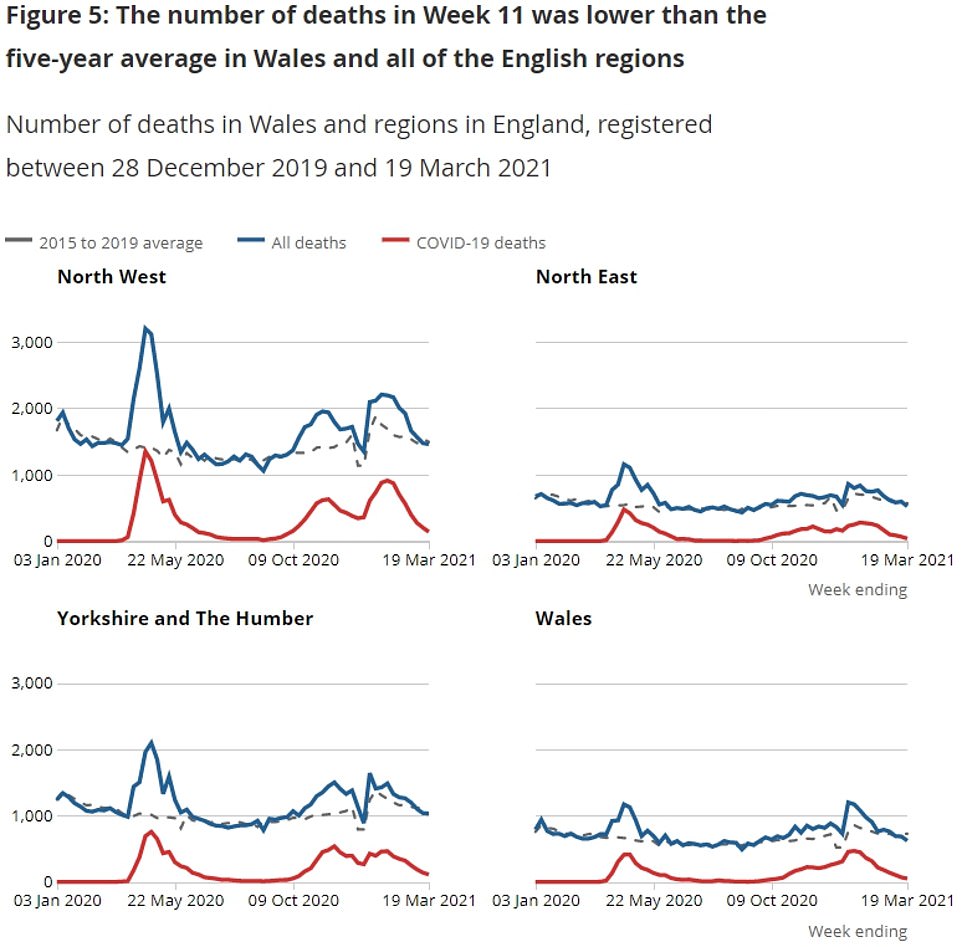 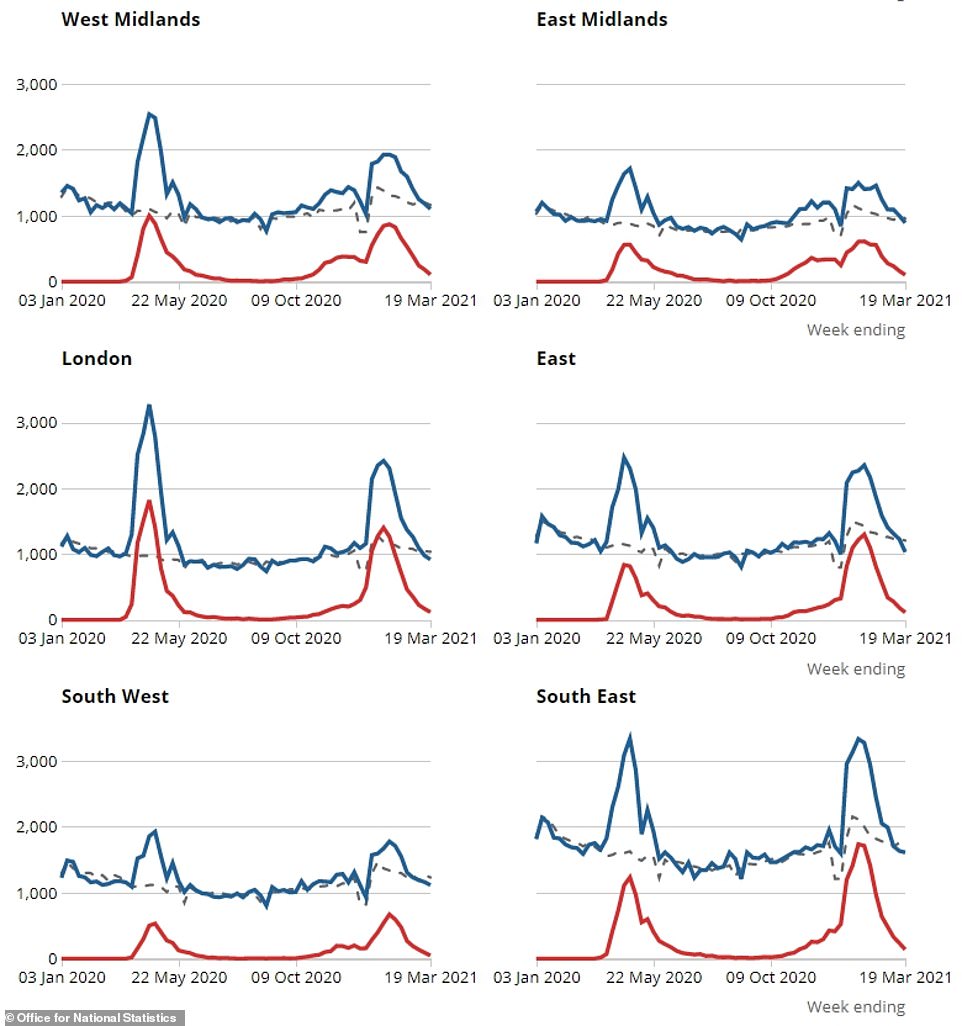 Almost 55 per cent of people in England now have coronavirus antibodies, suggesting at least half of the population has immunity against the disease.

A major Office for National Statistics testing survey today found 54.7 per cent of people in England had the virus-fighting proteins in the week ending March 14, up from 50.8 per cent the week prior.

The figure is likely to be even higher now because millions more have been vaccinated since the testing was conducted a fortnight ago, and it takes about two weeks for immunity to kick in.

It highlights the success of the country’s world-beating vaccine rollout, which has seen 30.5million Brits given their first dose and more than 3.5m fully vaccinated as of this past Sunday.

Boris Johnson is now facing calls to lift lockdown faster, after Covid cases, hospitalisations and deaths fell to their lowest level for six months yesterday. Britons have to wait at least another seven weeks before pubs, restaurants and hotels can fully reopen and allow customers inside. Foreign holidays are also banned until at least May 17.

One minister told MailOnline the PM must bring forward the arbitrary dates in order to ‘maintain public confidence that we are getting our freedom as soon as possible’.

ONS figures for deaths linked to Covid by the date of death, as opposed to when it was registered, show the UK has now suffered more than 150,000 fatalities from the virus.

Of these more than a third — 55,407 — have occurred since the start of January when the second wave was at its peak.

Other measures of Covid deaths published by the ONS including registrations — when deaths are officially recorded — are yet to cross this threshold.

The same weekly ONS figures also showed England and Wales saw fewer than 1,000 deaths linked to the virus in the week ending March 19. It was the first time fatalities were in triple figures since the week ending October 12, when there were 978 fatalities.

There were 10,331 deaths from all causes — including dementia, heart disease and the virus — in the latest week, which was more than 800, or 8 per cent, below the five-year average for the number expected at this time of year.

Among care home residents, deaths linked to the virus halved in two weeks, after 195 were recorded in the seven days to March 19 compared to the 467 registered in the first week of the month.

And deaths from all causes among the residents were 30 per cent below the five-year average, after 2,126 were recorded compared to the 2,891 expected.

Statisticians calculate the five-year average to reveal whether more or fewer people are dying at a particular time of year than expected, highlighting when there is a spike in fatalities.

Experts have warned deaths will likely dip below the five-year average for weeks because the virus has caused more people to die earlier than they would have, had they not become infected.

All regions of England recorded fewer deaths from all causes than expected at this time of year, with the sharpest dip in the East of England (-14.5 per cent below average or 175 fewer deaths).

Wales also saw its deaths dip below average after it recorded 106 fewer than expected, or a drop of 14.6 per cent.

The regions recording the fewest deaths are among the hardest hit during the second wave, with both London and the East of England pushed into Tier 4 measures in December amid a rampant Covid outbreak driven by the Kent variant. 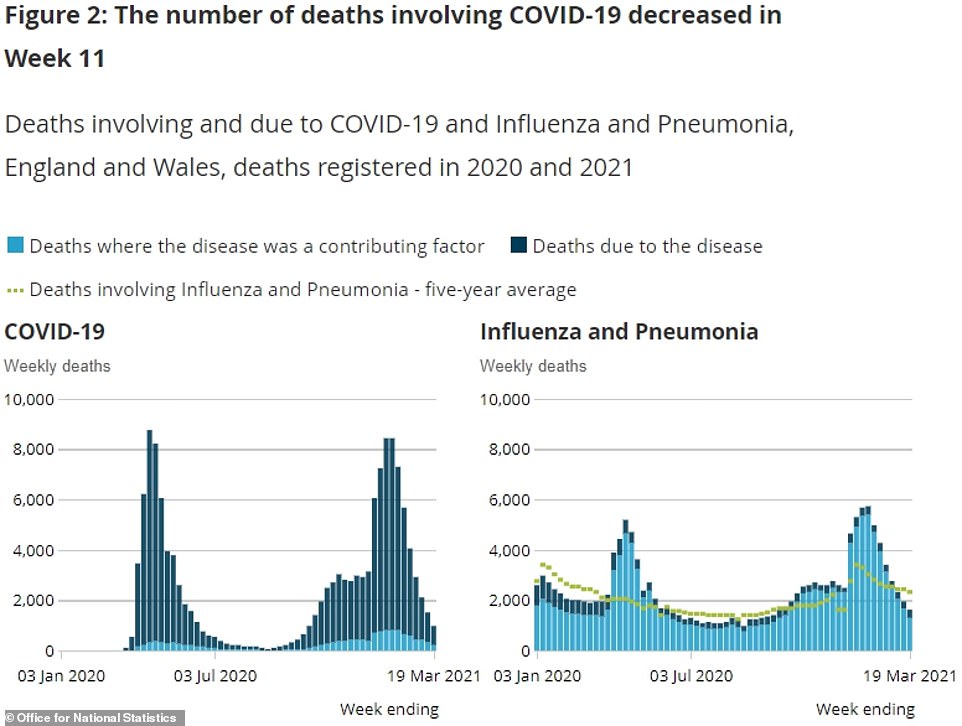 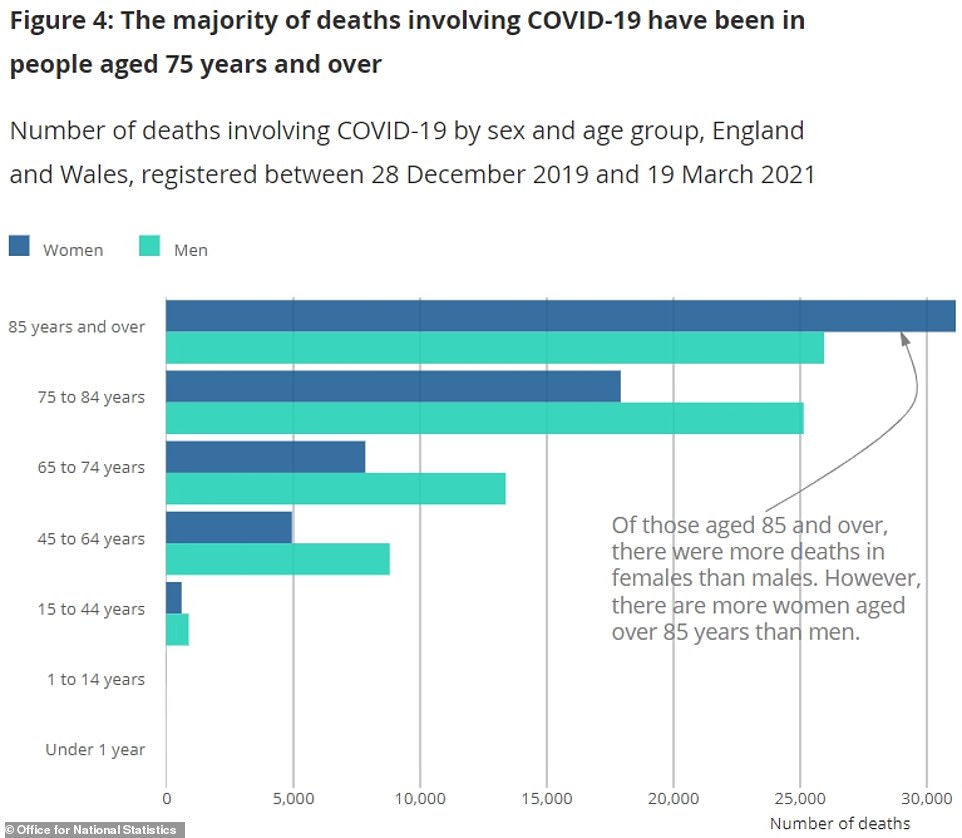 Most deaths linked to the virus have involved Britons aged over-70, official figures from the ONS have revealed 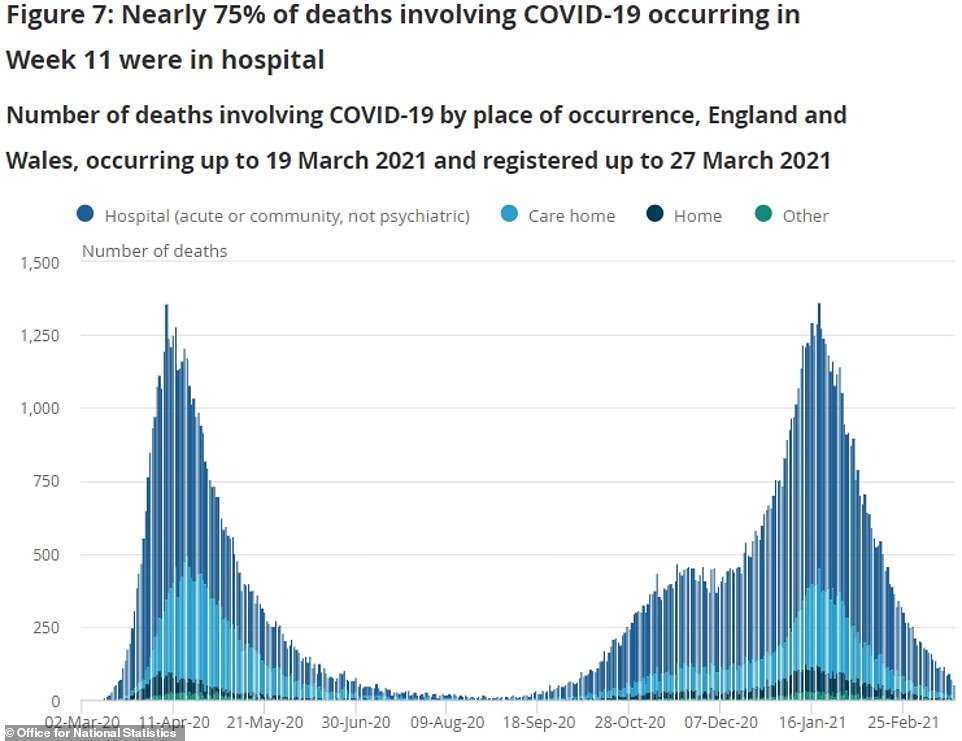 Most deaths involving the virus have also occurred in hospital, figures suggest, followed by care homes 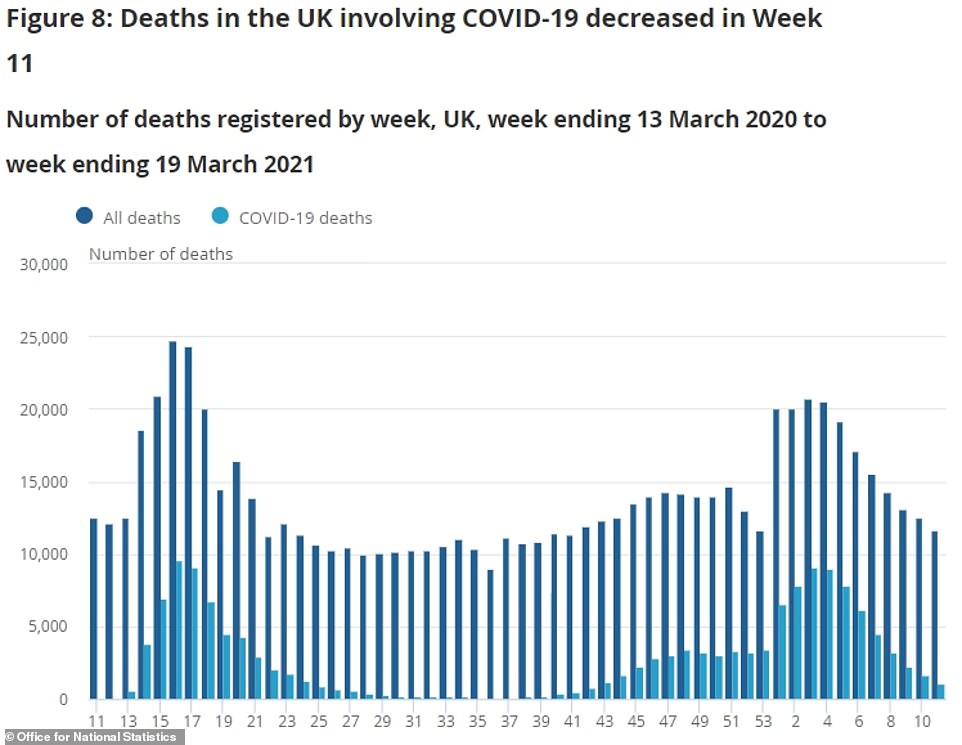 And the number of deaths from all causes and from Covid decreased in the week to March 19, the latest available 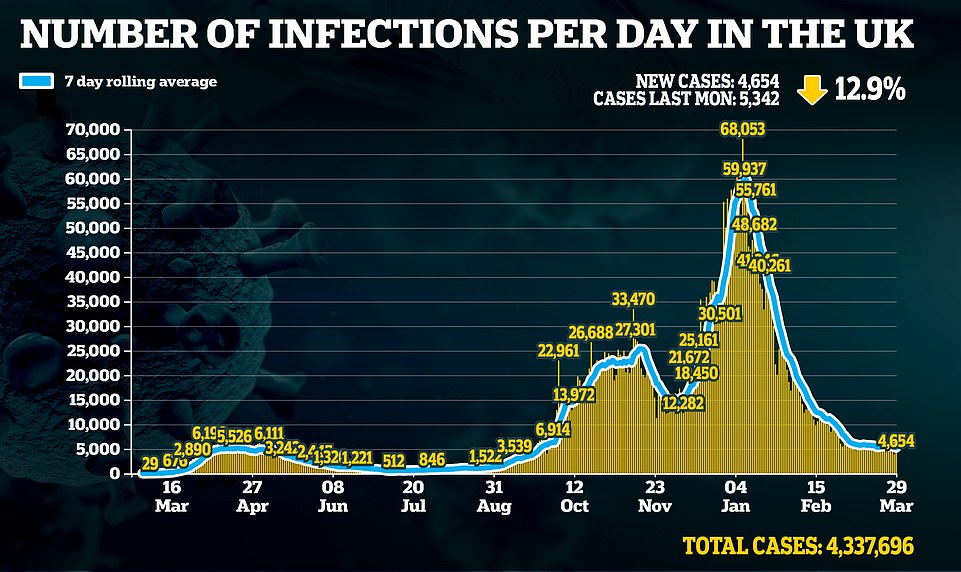 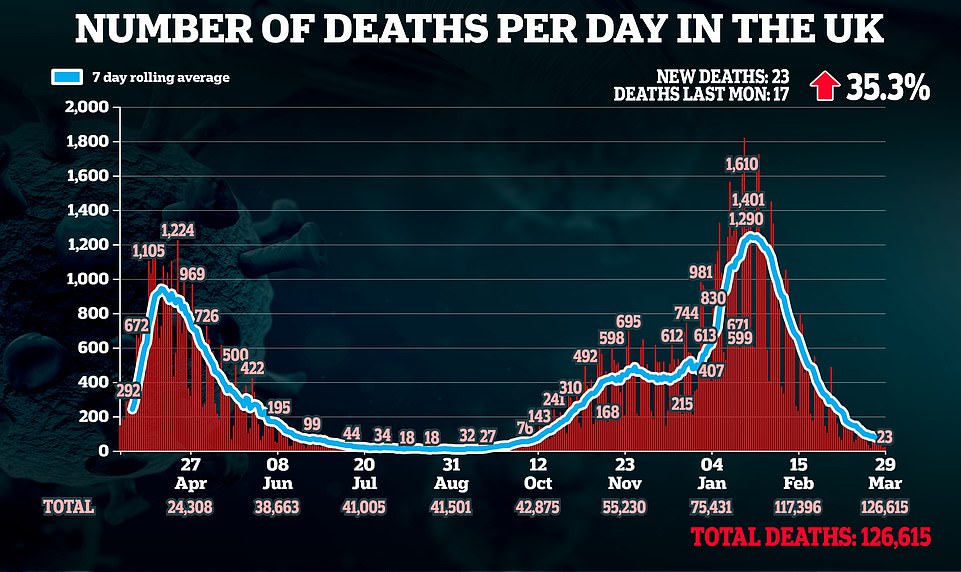 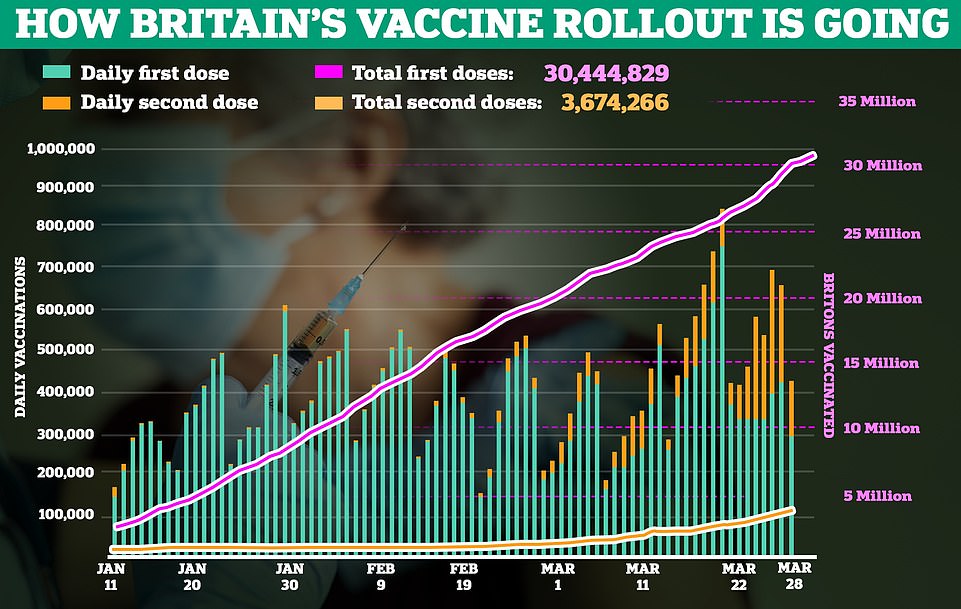