Work on a vast new £250million indoor waterpark in Manchester will start next year, with the centre opening in 2025.

The park, called Therme Manchester, will feature ‘living’ water slides, a wave pool and swim-up bars, and has been designed to boost visitor’s mental health and wellbeing.

Located opposite the Trafford Centre on the Event City site, it is forecast to attract up to two million visitors per year within five years, which would make it the most-visited ‘water-based attraction’ in Europe.

The ‘next generation’ water park will also include ‘immersive digital art, an on-site farm and botanical gardens’, all sitting inside glass domes. 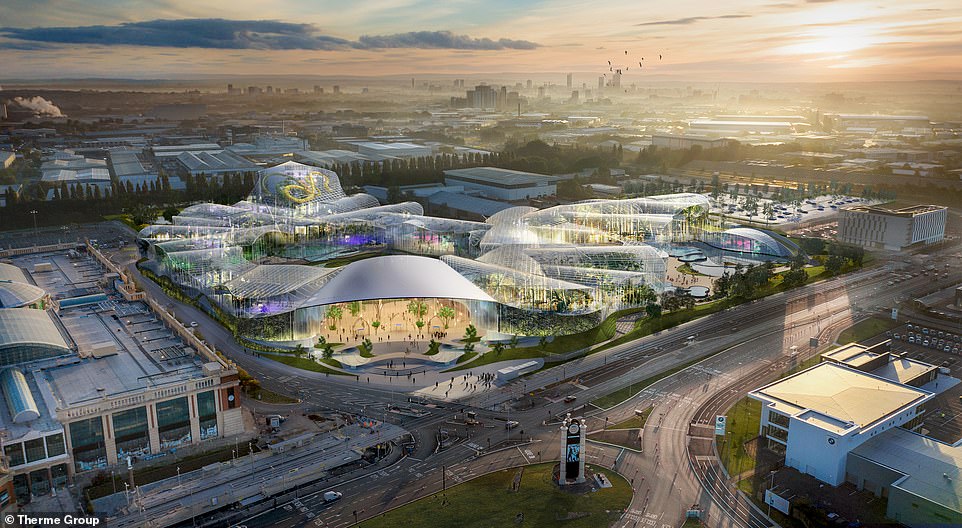 The park, which is being billed as the UK’s first ‘city-based wellbeing resort’, will cover 28 acres — the size of 19 football pitches. It will sit opposite the Trafford Centre in Manchester

The park, which is being billed as the UK’s first ‘city-based wellbeing resort’, will cover 28 acres — the size of 19 football pitches.

It was due to open in late 2023, but has been pushed back two years and revised plans will be submitted to Trafford Council in the summer.

‘Expert independent studies have shown the hugely positive economic and social impact that Therme Manchester will have, helping to create jobs, economic prosperity and bringing health and wellbeing to the daily lives of millions of guests.’

Inside, its large family zone will include 35 slides, indoor and outdoor pools, a steam room and ‘exotic palm tree relaxation areas’.

The dedicated adults’ area will have warm-water lagoons, therapeutic mineral baths and steam rooms and saunas.

There will also be a daily programme of water-based fitness classes as well as yoga, pilates and meditation sessions.

According to the plans, a wide range of wellbeing treatments will also be available as well as advanced body scanners and skilled therapists.

There will also be a range of bars, cafés and restaurants ‘offering everything from snacks and light bites to à la carte service’. 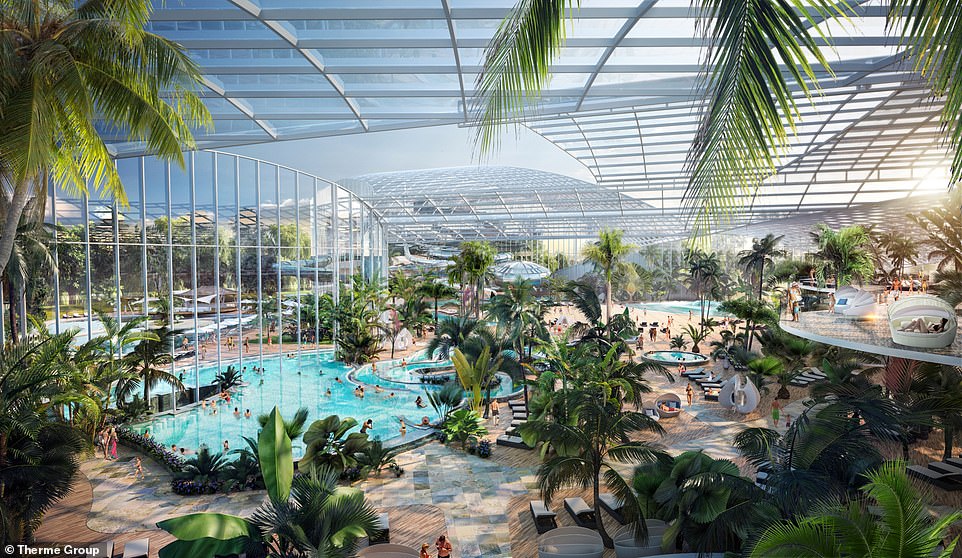 A rendering of the new £250million indoor waterpark. Revised plans will be submitted in summer and include the world’s first living water slide and ‘immersive digital art, an on-site farm and botanical gardens’

The site will also have a visitor and education centre designed for school and community groups. It has been included in a bid to teach people about health, sustainability, food and nature.

The central focus of the project will be a two-acre wellbeing garden in the shape of a rose.

The developer, the Therme Group, explained: ‘This bio-diverse garden for all seasons will be an evolving work of art, with petal-shaped terraces and beautiful pools and water features. It will act as a focal point for socialising, learning and discovery.’

Meanwhile, the developer says that thousands of plants and trees will be incorporated into Therme Manchester’s natural environment, which will be ‘created by world-leading designers, artists, architects and engineers to achieve the highest levels of experience, quality and sustainability’.

After the first round of plans were approved, Mr Iacob said that the site would transform life for city residents and people further afield.

Revised plans are now expected to be submitted this summer.

‘Therme Manchester will lead the way in health and wellbeing and with the updated plans now including the UK’s first all-season urban beach and the world’s first living waterslides,’ he said.

‘We are excited to continue working with Therme Manchester to deliver this innovative health and wellbeing experience in TraffordCity, the UK’s foremost retail, leisure and commercial destination.’