A British-born militant sentenced to death for the beheading of American journalist Daniel Pearl was ordered to be let out of prison on Thursday by Pakistan’s Supreme Court in the latest twist to a legal saga spanning nearly two decades.

The court said, however, that Ahmed Omar Saeed Sheikh – who has been on death row for 18 years – should remain in custody in accommodation similar to prison staff’s while another appeal is considered.

Sheikh and three accomplices have been behind bars since 2002 when they were convicted of the kidnapping and murder of Pearl – who was at the time the South Asia bureau chief for the Wall Street Journal.

Since then they have won and lost a series of appeals and counter-appeals in connection with the case, with a top court last year overturning their murder convictions.

That decision meant they had completed their sentences on the kidnapping charge, and the court in January ordered them to be released.

In February, Pakistan’s Supreme Court ordered Sheikh to be moved to a so-called government ‘safe house’. 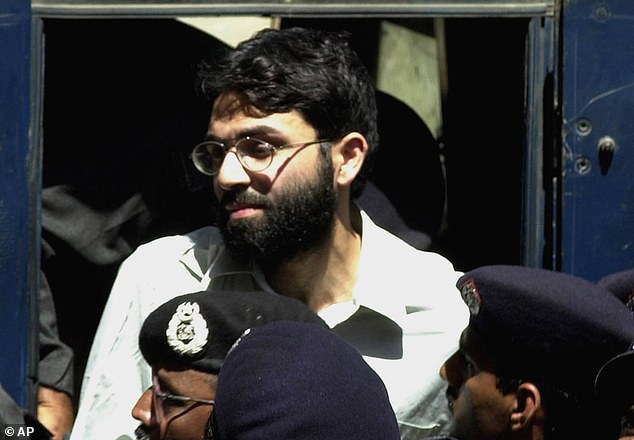 British-born militant Ahmed Omar Saeed Sheikh, who was sentenced to death for the beheading of American journalist Daniel Pearl, was ordered to be let out of prison on Thursday by Pakistan’s Supreme Court in the latest twist to a legal saga spanning nearly two decades

The release order said he would be under guard and not be permitted to leave the safe house, but his wife and children will be allowed to visit him.

They were kept in custody, however, as the provincial and federal governments – as well as Pearl’s family – launched another petition to keep them behind bars.

On Thursday, the court said they should be confined to prison staff accommodation during the process.

‘We are not satisfied with the continuous detention of this person,’ Justice Umar Ata Bandial told the court. ‘The detainee Ahmed Omar Saeed Sheikh shall be accommodated in a government building in which officers of jail reside.’

Lawyers said Sheikh will likely be transferred from the southern port city of Karachi to Lahore, his ancestral home, in the east.

It was not immediately clear when the judges would make a final ruling on the case proper, or if prosecutors have exhausted all avenues of appeal.

The February order sending Sheikh to a safe house appeared to be a concession to the federal government, as well as the government of southern Sindh province where Karachi is the capital.

The case has caused enormous friction between Islamabad and Washington, despite officials in both capitals being convinced of Sheikh’s complicity in Pearl’s death. 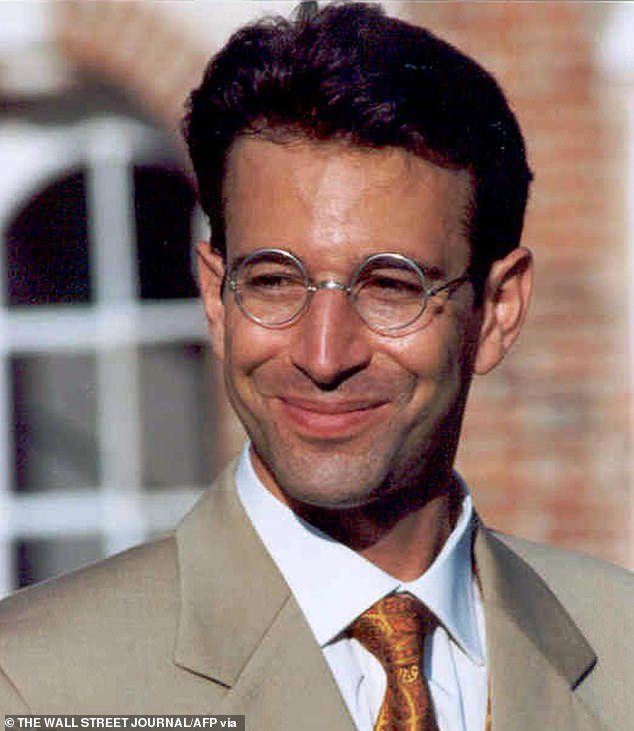 Daniel Pearl (pictured) disappeared on January 23, 2002, in the port city of Karachi where he was investigating links between Pakistani militant groups and Richard C Reid, dubbed the ‘shoe bomber’ after his attempt to blow up a flight from Paris to Miami with explosives hidden in his shoes [File photo]

At his original trial, the now 47-year-old did not deny being behind the plot to kidnap the American, but said he was not responsible for his brutal beheading, which was filmed and broadcast on the internet.

In a transcript released by the Pentagon in 2007, Khalid Sheikh Mohammed – one of Osama bin Laden’s most trusted lieutenants and the alleged mastermind of the September 11 attacks – told a military tribunal in Guantanamo Bay that he had slit Pearl’s throat.

He is still in US custody awaiting trial on myriad charges that carry the death penalty.

Omar Sheikh was born in London to middle-class Pakistani immigrant parents and attended private schools before starting a degree at the London School of Economics.

But the hulking 6ft 2in amateur boxer dropped out in his first year and began delivering aid to support Muslims besieged by Serbs during the Bosnian war in the 1990s. 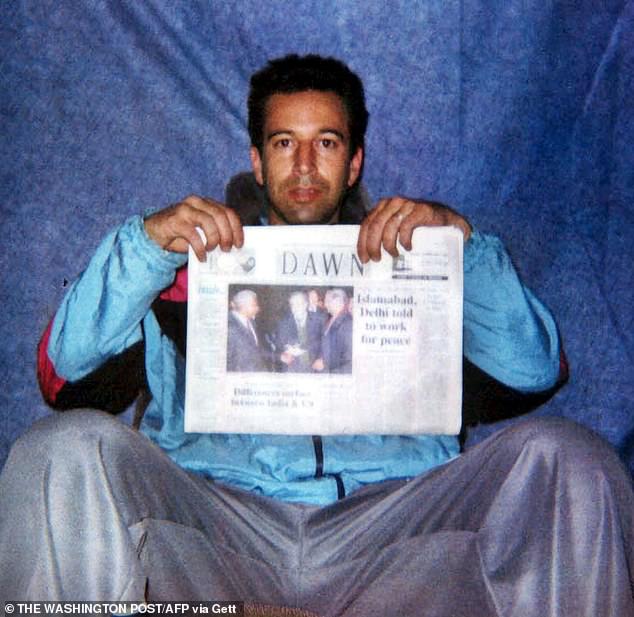 Pictured: This undated file photo releaed by the Washington Post shows Wall Street Journal reporter Daniel Pearl at an undisclosed location with a copy of Pakistan’s English language newspaper Dawn, before he was murdered in 2002

In his biography ‘In the Line of Fire’, former Pakistan military chief and president Pervez Musharraf said Sheikh had been recruited by Britain’s MI6 spy agency, but went rogue after becoming radicalised when he moved to Pakistan.

In 1994, posing as a Hindu in Indian-administered Kashmir, Sheikh arranged the kidnapping of four foreign tourists to demand the release of jailed Islamic militants.

He was captured in a shootout and imprisoned in New Delhi, but freed in a hostage exchange in 1999 when militants hijacked an Indian Airlines flight and forced it to land in Kandahar, Afghanistan.

He lured Pearl to his death in Karachi on January 23, 2002 by pretending to be a media-friendly intermediary with access to extremists. 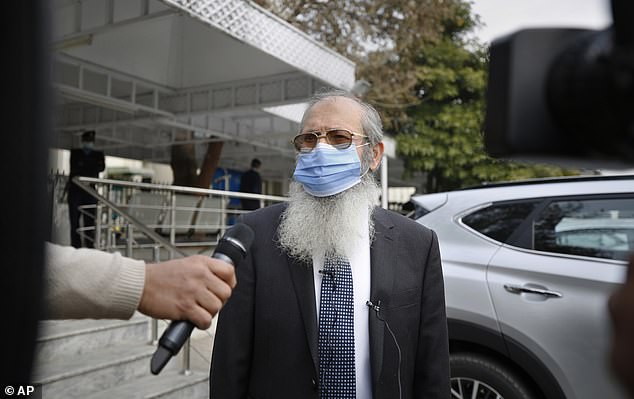 Pearl was in the city investigating links between Pakistani militant groups and Richard C Reid, dubbed the ‘shoe bomber’ after his attempt to blow up a flight from Paris to Miami with explosives hidden in his shoes.

Pearl’s widow Mariane, a French journalist, wrote a book about her husband’s life titled ‘A Mighty Heart’, which was later adapted into a movie co-produced by Brad Pitt and starring Angeline Jolie.

Washington has previously asked Pakistan to hand Sheikh to US authorities if he is ever freed.

The case against Ahmed Omar Saeed Sheikh appeared to have fallen apart in February this year because of the contradictory evidence produced during his original trial in 2002 and the decision by the prosecution at the time to try him and three other accused co-conspirators together.

According to the Pearl family lawyer, Faisal Siddiqi, this means that doubt about the guilt of one translates into a doubt about all.

Washington expressed outrage, promising to pursue extradition of Sheikh on two separate US indictments against him.

For its part, Pakistan’s government has thrown up every legal hurdle it could to keep Sheikh in jail following his acquittal last April by a lower court.

WHAT LEGAL OPTIONS REMAIN FOR PAKISTAN?

The provincial Sindh government took the last remaining legal step by filing a review petition in February with the Supreme Court.

It already defended itself against earlier charges of contempt for previously refusing to release him, ignoring an order from a lower court.

Pakistan also might consider charging Sheikh in connection with allegations that he possessed nine different SIM cards for phones he used to contact friends, including some in Britain, in 2009 while on death row.

There have been suggestions in the local media in Pakistan that he used the SIM cards to call for assistance to break him out of the Hyderabad jail where he’d been on death row since his 2002 conviction.

He was moved to a Karachi jail after his April acquittal.

WHAT OPTIONS ARE OPEN FOR THE US?

There are a couple of hurdles to extradition: Pakistan, like the United States, has a double jeopardy rule that prevents a person from being tried for the same offence twice.

The US also does not have an extradition treaty with Pakistan, although Islamabad has in the past bypassed legalities to send suspects to the US, including Khalid Sheikh Mohammad, the alleged mastermind of the 9/11 terrorist attacks.

Mohammed has been in US custody on Guantanamo Bay since his arrest in Pakistan in March 2003. He also confessed that he killed Pearl himself, but has not been charged in the Wall Street Journal reporter’s death.

The most recent example of Pakistan allowing someone accused of a crime to leave for the US was in 2011, when Raymond Davis, an American contractor at the US Embassy, returned home after gunning down two people in the eastern city of Lahore.

He said he opened fire because he felt threatened.

The case could be one of the first major tests for President Joe Biden and US-Pakistan relations have historically been tumultuous.

Pakistan likely will play a crucial role in the Biden administration’s attempts to navigate the US withdrawal from Afghanistan. Pakistan was seen as key to getting the Taliban into negotiations with the Kabul government, even if those talks have been excruciatingly slow and until now have garnered little success, even as violence has spiked.

Mohammad Amir Rana, executive director of the Pakistan Institute of Peace Studies, said Sheikh’s acquittal has created a conundrum for both countries.

Until now, Pakistan has taken every legal step to keep Sheikh in jail but sending him to America could rile up opposition at home, Rana explained.

For America, snubbing Pakistan just when the two have agreed on exchanging intelligence on terror financing and the road to a political settlement in Afghanistan is at a critical juncture, could result in setbacks on both fronts.

WHO IS AHMAD SAEED OMAR SHEIKH?

A British national of Pakistani heritage, Sheikh lived a relatively privileged life in Britain, where he attended the prestigious London School of Economics.

It appears he was inspired to jihad by the conflict in the former Yugoslavia in the 1990s, relentless attacks on Muslims in Bosnia at the time, their treatment in Bosnian Serb camps and what Sheikh perceived as Western indifference to their plight.

He traveled to Bosnia and later joined Harakat-a-Ansar, a Pakistan-based militant group that was declared a terrorist group by the US in 1997 and later became known as Harakat-ul-Mujahedeen.

He also travelled to the Indian-ruled section of Kashmir to wage war against India in the Muslim-majority region. The disputed Himalayan region is split between India and Pakistan and claimed by both in its entirety.

Sheikh’s strength seemed to be his ability to use his British upbringing to entice foreigners to trust him. That ability led to the kidnapping of the American tourist in 1994, and according to some evidence, eased any concerns Pearl might have had as he sought to track militants in Pakistan.

Sheikh was arrested by India after the 1994 kidnappings but was among the terror suspects freed by India on December 31, 1999 in exchange for the hostages on an Indian Airlines aircraft that was hijacked and taken from Nepal to then Taliban-controlled Afghan city of Kandahar.