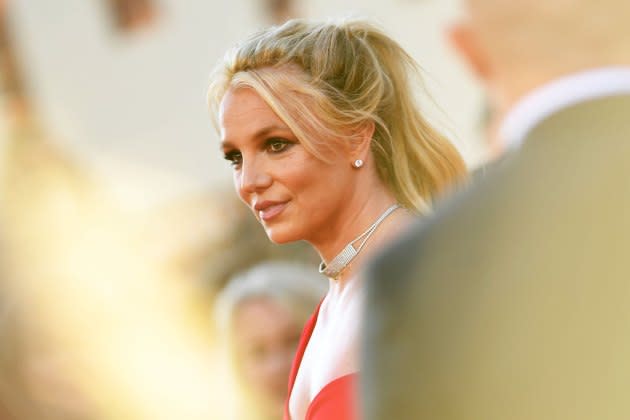 After wiping her Instagram account last week, Britney Spears returned on Thursday (Sept. 1) with a pointed response to comments made by her youngest son regarding her parenting.

“I’ve tried my best at being the best person I can be,” Spears wrote in the note. “To be basically held hostage in homes under nurses and bulls–t I hope my kids one day understand my reasoning of my play in water revealing myself as any woman would being held under blankets and supervision under the conservatorship!!!”

The message from the “Hold Me Closer” singer appears to be in response to a Daily Mail piece featuring a preview of a new ITV News documentary slated to air on Friday (Sept. 2) in which her sons Preston, 16, and Jayden, 15, react to Spears’ recent wedding to longtime beau Sam Asghari, and what is reportedly a fracture in their relationship with their mom. According to the Daily Mail, Jayden says in the program there is “no hate” in their family, but that it will take “a lot of time and effort” to repair it.

“I 100% think this can be fixed. It’s just going to take a lot of time and effort. I just want her to get better mentally. When she gets better I really want to see her again,” Jayden says, adding a personal message to Brit: “I love you a lot, I hope for the best for you. Maybe one day we can sit down like this and talk again.”

The singer has reportedly not seen her sons since before the wedding, and Jayden said that while he’s happy for the couple, a reunion at the wedding “would have been inappropriate. At the time it just wasn’t a good time to go. I’m not saying I’m not happy for her. I’m really happy for them, but she didn’t invite the whole family, and then if it was just going to be me and Preston. I just don’t see how that situation would have ended on good terms.”

In her note, Britney added, “Finally at 40 without the restraints of what my family did to me.” It is in an apparent reference to the 13-year conservatorship that ended last year, in which her estranged father, Jamie Spears, had near-total control over the star’s personal and professional dealings. The pop star also recently called out her mother in a 22-minute voice note for allegedly not supporting her during the difficult conservatorship period.

Spears directly addressed Jayden at one point in the post, writing, “I send all the love in the world to you every day for the rest of my life!!!! My love for my children has no boundaries and it deeply saddens me to know his outcry of saying I wasn’t up to his expectations of a mother… and maybe one day we can meet face to face and talk about this openly!!!! Maybe dear child YOU can explain to me why our family would do that to anyone!!!!”

The singer also said that she has supported the children’s father, ex-husband dancer Kevin Federline, writing, “I assume it is easier for you guys not to have someone check on you to make sure you’re doing your homework!!!!” Spears also made other claims about Federline’s parenting style while chronicling the sacrifices she said she made to keep her sons happy and comfortable.

“I completely understand your need to live with your father as I had to play the perfect role for 15 years for absolutely nothing,” she said in the lengthy note.

“I’m so happy I was able to carry 4 tours, judge X-Factor and WAAAY more… I did that for you. And Preston,” she continued. Britney reminded Jayden that “you are my child and always will be!!!!,” telling both teens that she would love to see them “face to face,” while encouraging her second-born to keep honing his piano skills.

The singer — who was tightly restricted under the conservatorship put in place after her public struggles with mental health issues in 2008 — has been more open about the difficulty of not being able to speak her mind during the 13-year arrangement, and directly addressed comments about her state of mind in the post.

“As for my mental health… my dear child understand you must learn to pick up a book and read one before you resort to even thinking about my intellect sweetheart!!!,” she wrote, before disparaging Federline again and asking her son if he can “honestly” say that what “memaw and paw paw” — a seeming reference to her parents — “did to me was fine and call them not bad people… then yes I have failed as a mother and hopefully that’s a chat for you and your father to sit face to face and try to learn WHAT’S GOOD.”