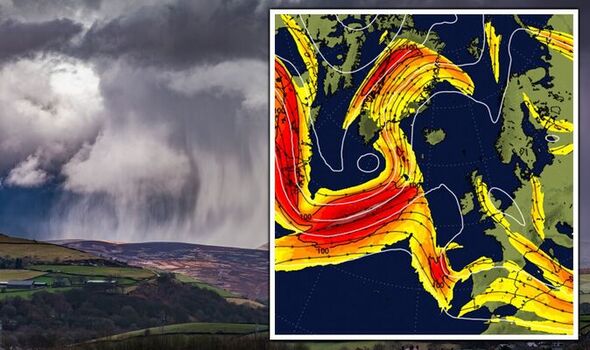 The UK will turn colder through the coming week as concerns grow for an early winter Arctic blast. A raging jet stream has for the past few weeks pulled a relentless barrage of stormy weather systems in from the Atlantic.

However, the jet has now fractured, weakening its pull of westerly low pressure and opening the doors to cold from the east.

Jim Dale, meteorologist for British Weather Services, said: “The jet stream is weakening and breaking and that means that through the next week or so we are not going to get the same amount of wind and rain as we have seen.

“There will be a bit of a respite from this at the start of December, where we expect more settled, foggy, typical weather for the time of year.

“But with this change comes the building of high pressure, and with this encroaching from the east there is still the chance of it brining something very cold and wintry through the start of next month.

“It is still early, but the signs are still there for a possible Beast from the East situation, with things turning colder after the first week of December.”

Temperatures will start to drop after the weekend although it will turn much drier, according to the Met Office.

Met Office meteorologist Alex Deakin said: “The jet stream is currently pretty active allowing low pressure systems to barrel into the UK, but next week it will change to a more wiggly, amplified pattern, and here high pressure may well be building.

“The jet stream is already starting to shift so weather fronts don’t move as fast.

“A weather front will stagger across the country this weekend and it will bring a spell of rain from west to east, but the timing of this rain is open to some doubt.

“Beyond the weekend, the models tend to agree that we will keep low pressure to the northwest, but a chunky area of high pressure moves in behind brining drier weather.”

While it will turn colder, it is as yet uncertain how low temperatures will dip next week, he added.

He said: “We are likely to see things turning a little warmer through the weekend, and then colder next week.

“But just how frosty and foggy will depend on the position of high pressure.”

Some independent forecasters reckon a major cold blast is less than 10 days away with pre-Christmas snowfall possible.

James Madden, forecaster for Exacta Weather, said: “We are now looking towards the end of the first week in December for a cold blast, and the models are still indicating this is a possibility.

“This would bring a major pattern change to the weather, and the prospects of a White Christmas continue to mount.

“Over the weekend, there will be some further wind and rain, but this will give way to drier, colder and frostier conditions through the last few days of November and into December.”