Nader, 26, was seen wearing a bright green puffer jacket as she left the police station in Greenwich Village with her husband, Billy Haire, after reportedly finding the tracking device in her coat pocket on Wednesday.

The model said she was at the Odeon bar in Tribeca when she suspected the Apple AirTag was slipped into her coat, but she didn’t notice it then.

The high-tech, low-cost device can be used by stalkers to track potential victims.

It wouldn’t be until five hours later, after Nader had left the bar to meet some girlfriends at a different tavern, and was walking home alone around midnight that she was notified by Apple’s security app that she may be carrying a tracking device. 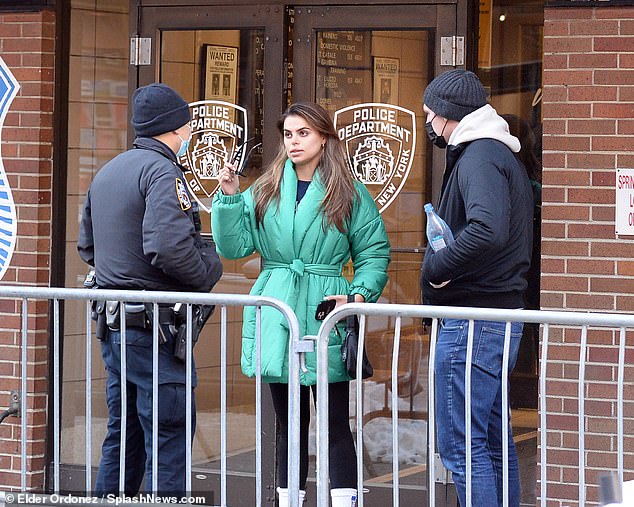 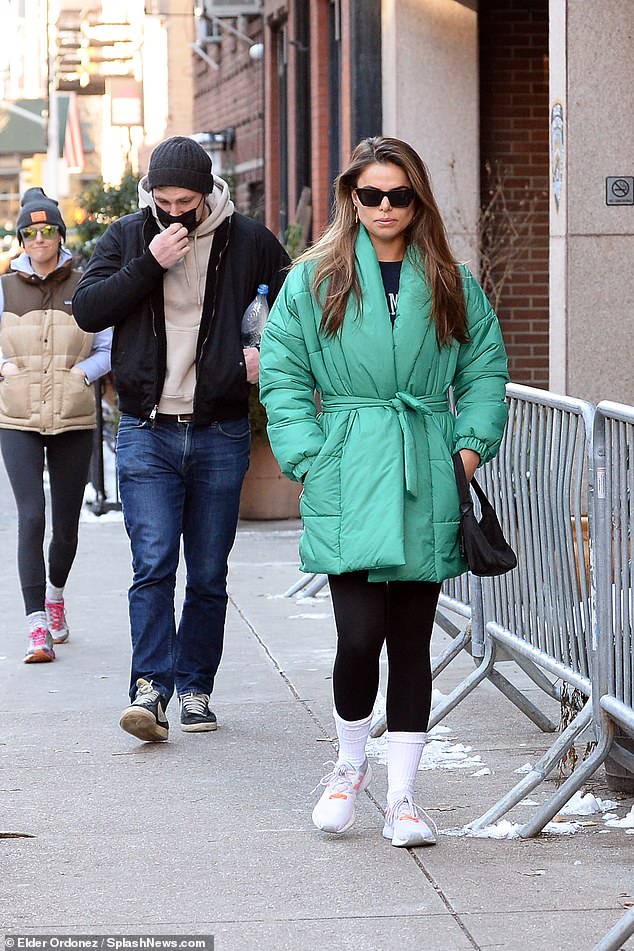 ‘Basically my coat was on the barstool at the Odeon in Tribeca, which was my first location,’ she told DailyMail.com on Friday.

‘I went to the bathroom left my coat on the chair and that’s when I think someone slipped it in. They then followed me for five hours all the way home.’

Apple has a security feature connected to the tags which notifies a person about an ‘unknown accessory’ traveling with them. Why it took several hours for Nader to get the notification is unknown.

Nader was never confronted by her potential stalker and was able to safely get home. Now, she is warning other women to ‘watch your belongings’ and to ‘look out for the notification.’ 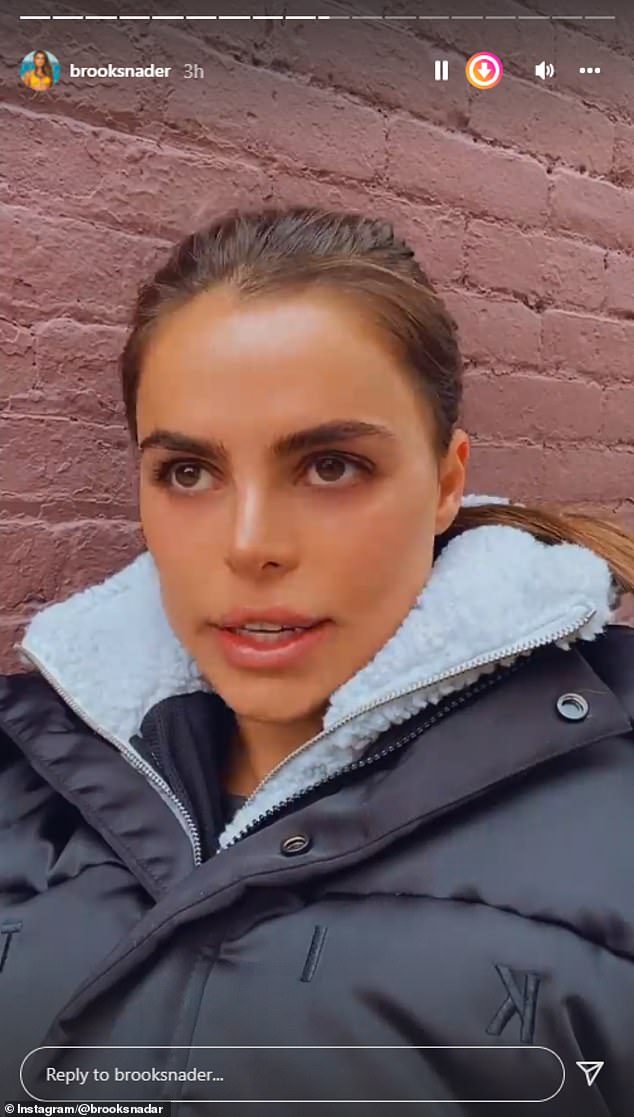 She is now warning others to be aware of their location and ‘look out for the notification.’ Nader isn’t the first woman who has been tracked with the device or a similar device and maybe women have reported they didn’t know about the device until they were notified by Apple 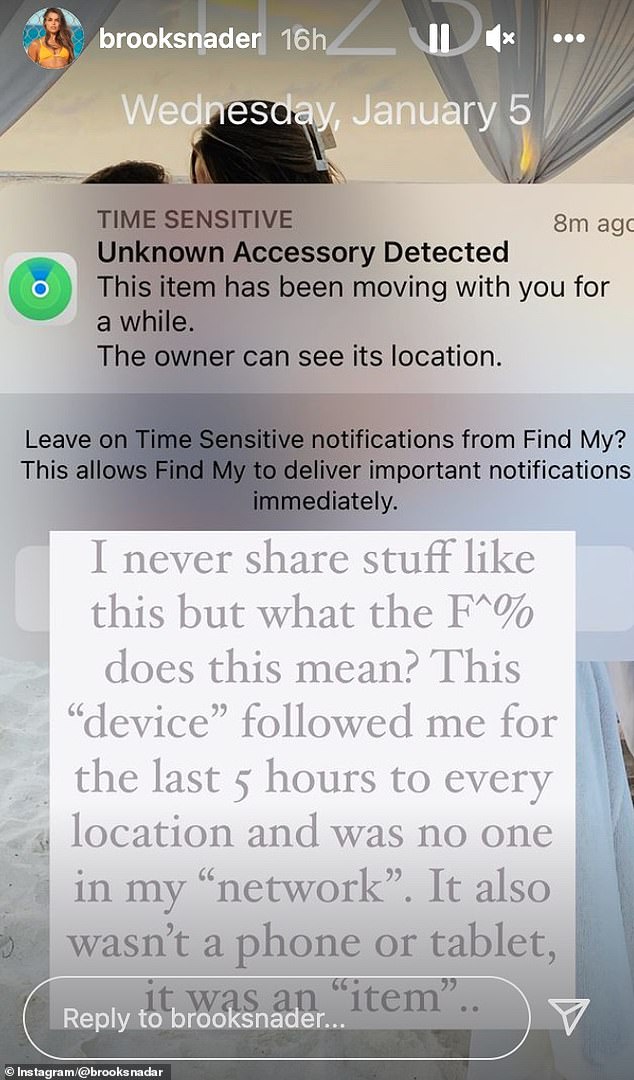 ‘The only silver lining is that I actually got notified that someone was tracking me,’ she said in an Instagram video.

‘It was the scariest moment ever. I just want people to be aware that this exists,’ she said.

‘I never thought anything like this could happen to me and it did. If this does happen to you and you find an AirTag, immediately call the police and Apple to track the serial number back to the perpetrator,’ she told DailyMail.com.

‘As women, we need to stick together and warn each other of situations like these.’

Nader isn’t the first woman that has been tracked with products like Apple’s AirTag or the Tile trackers. Trackers like these are typically small in dimension and slim, easily able to remain hidden from an unsuspecting person.

Customers can attach them to almost anything, and using the app, users can then see where the item is located at all times.

The devices are able to pinpoint exact locations and are constantly updating with near accurate precision. The relatively inexperience items – Apple’s AirTag retails for $29.99 – makes it easy to stalk someone. 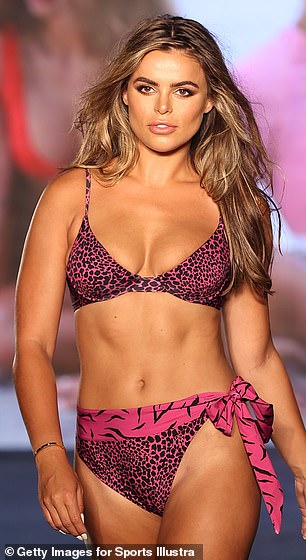 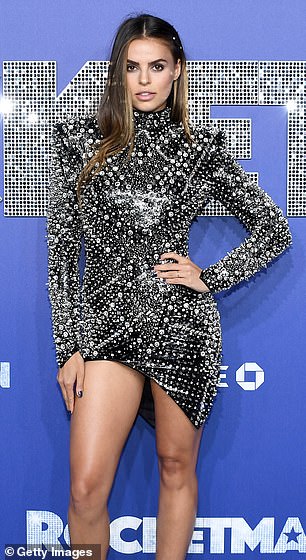 The model (pictured in 2021 and 2019) said it was the ‘scariest moment, but luckily did not come face to face with her tracker

Women across the nation and in Canada have reported similar cases.

A Maryland woman found an AirTag on her car in the early hours of the morning at a bar, a Texas woman found one in her purse, and a Mississippi woman had to notify police after she received a notification about one.

However, Apple ensured that it takes customer safety strongly.

‘We take customer safety very seriously and are committed to AirTag’s privacy and security,’ an Apple spokesperson told the New York Post.

‘AirTag is designed with a set of proactive features – a first in the industry – and the Find My network includes a smart, tunable system with deterrents that applies to AirTag, as well as third-party products as part of the Find My network accessory program.’

Apple also released Tracker Detect for Android users in December, so users across any phone can detect unwanted tags.

The tracking device social media users claim can aid stalking: What is an Apple AirTag?

The AirTag tracking device is a small, circular device with an Apple logo at the centre that tracks missing items through the ‘Find My’ app.

AirTag is equipped with Bluetooth connectivity to pair with an iPhone or iPad. It can be attached to non-tech items like keys or wallets and provides notifications when you become separated from the item.

The ‘Find My’ app provides step-by-step directions to locate the tag and the missing product to which it’s attached.

Upon it’s release Apple emphasised the device – which was rumoured as far back as September 2019 – is not for tracking people. 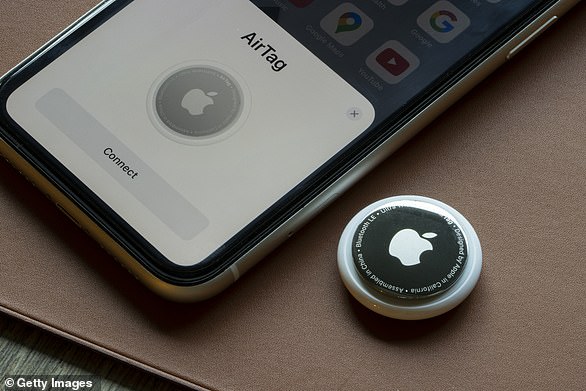 The AirTag tracking device is a small, circular device with an Apple logo at the centre that tracks missing items through the ‘Find My’ app 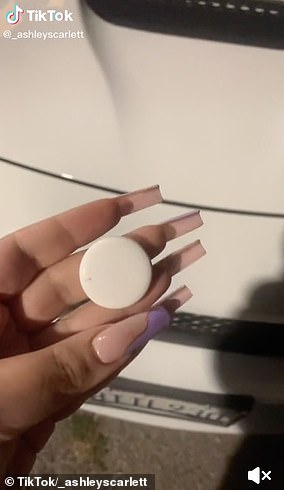 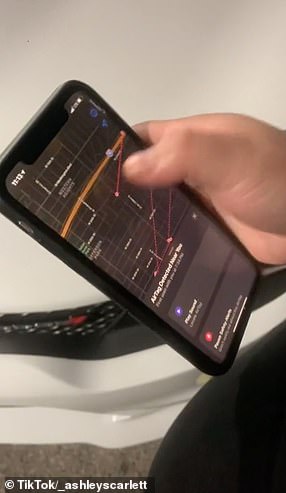 Ashley Estrada, a small business owner from LA, went viral after allegedly discovering an Apple AirTag hidden behind the license plate of her car. In a video shared to TikTok , the 24-year-old showed viewers an AirTag stating: ‘I’m literally f***** shaking – look what I just found on my car.’

However in recent months social media users have shared growing concern about these devices being used to aid stalking and theft.

Ashley Estrada, a small business owner from LA, went viral after allegedly discovering an Apple AirTag hidden behind the license plate of her car.

In a video shared to TikTok, the 24-year-old showed viewers an AirTag stating: ‘I’m literally f***** shaking – look what I just found on my car.’

In a separate video she explained: ‘I was hanging out with my cousin’s girlfriend, and next thing you know she gets a notification on her phone, which is how we found out, because it told us.

‘It says first seen at 7:34, so that’s when they put it on my car. Then it said “Play Sound”, which is what we did…and this is how we were able to detect where it was at on my car.’

Last year it was revealed that thieves were using Apple AirTags to track high-end vehicles.

Police in the York region of Ontario, Canada , recorded at least five incidents in a matter of weeks where the devices had been used to track cars.

Days after the gadget’s release, a German security researcher who goes by the name  Stack Smashing revealed he was able to hack into one of the devices.

The IT researcher said he was able to ‘dump the firmware and some important areas,’ essentially modifying the device’s tracking software.