Butcher of Bosnia Radovan Karadzic will be moved to British prison to serve rest of his life sentence for Srebrenica genocide when 8,000 men and boys were massacred

The UK has agreed Bosnian Serb wartime leader Radovan Karadzic should be transferred to a British prison to serve the rest of his sentence for his role in the Srebrenica genocide, Foreign Secretary Dominic Raab said.

Former Bosnian Serb political leader Karadzic, 75, was convicted of war crimes during the Balkan conflict of the 1990s.

He was handed a life-sentence after 8,000 men and boys were massacred in the Srebrenica genocide. 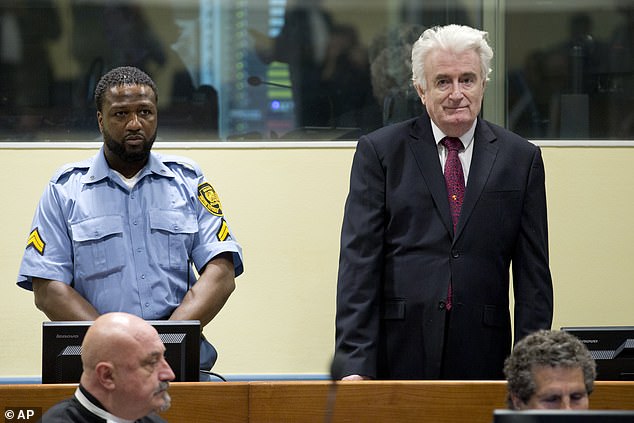 Mr Raab said Karadzic ‘helped prosecute the siege of Sarajevo with its remorseless attacks on civilians’.

He added: ‘We should take pride in the fact that, from UK support to secure his arrest, to the prison cell he now faces, Britain has supported the 30 year pursuit of justice for these heinous crimes.’

As well as genocide, Karadzic was found guilty of war crimes and crimes against humanity for the 44-month Serb siege of the Bosnian capital Sarajevo and for overseeing a campaign of ethnic cleansing that drove Croats and Muslims out of Serb-claimed areas of Bosnia.

In hiding for over a decade after the war, he was arrested and handed over to the International Criminal Tribunal for the Former Yugoslavia in July 2008. After his conviction he was held at court’s detention centre in The Hague.

Psychiatrist, poet and mass murderer: The warlord who spent 13 years on the run and disguised himself as a new age healer

From psychiatrist and poet to leader of the Serbian resistance in Bosnia, Radovan Karadzic ultimately chose a brutal path.

Born in 1945 into a poor family in Savnik, Yugoslavia, Karadzic moved to Sarajevo in 1960 to study medicine.

By 1971 he was practicing psychiatry in the ethnically mixed Bosnian capital, writing poetry and a children’s book.

In 1985, he was tried for embezzlement of public property while building a family house and served 11 months in jail.

But by 1990, with nationalism on the rise, Karadzic shifted his focus to politics, forming the Serb Democratic Party (SDS) that led to his election to parliament in the first democratic elections after the fall of communism the same year.

As the Yugoslav republics were breaking away one by one, first Slovenia, then Croatia, Karadzic warned non-Serbs in Bosnia not to declare independence from Serb dominated Yugoslavia, telling them clearly what would happen if they did.

Karadzic, who saw himself as a historic figure who would unify all Serbs in a common country, led the Serb resistance to the majority vote for Bosnia’s independence in 1992 and declared himself the leader of the Serbian Republic of Bosnia and Herzegovina.

Bosnian Serbs armed and backed by the Yugoslav Army conquered some 70 per cent of the country, laying siege to its capital and killing and expelling non-Serbs from the territory they controlled.

The conflict took over 100,000 lives and forced over two million people from their homes.

On July 11, 1995, Serb troops overran the Muslim enclave. Some 15,000 men tried to flee through the woods toward government-held territory while others joined the town’s women and children in seeking refuge at the base of the Dutch UN troops.

The outnumbered Dutch troops could only watch as Serb soldiers rounded up about 2,000 men and later hunted down and killed another 6,000 men in the woods. The bloodshed marks Europe’s worst massacre since the Holocaust.

So far, remains of some 7,000 victims have been excavated and identified through DNA technology but the bodies of more than 1,000 more victims have yet to be found.

Karadzic was indicted by the UN war crimes tribunal in 1995, one of the 11 counts relates to genocide in Srebrenica.

He went into hiding and evaded arrest for 13 years before he was caught in Belgrade, Serbia, in 2008, where he hid masked as a New Age healer.

Karadzic lived under the guise of Dr Dragan Dabic, an identity he had stolen from Bosnian Serb who died during the war in Sarajevo in 1993.

As Dr Dabic, he practiced alternative medicine and ran his own website where he advertised his expertise in ‘human quantum energy’.

Over the years, he made himself unrecognizable growing a thick beard and long, grey hair, and became known to the locals as ‘Santa’.

While Karadzic’s wife Ljiljana remained in their family house in the former Serbian stronghold of Pale, east of Sarajevo, he had a girlfriend called Mila, who worked with him in his ‘alternative medicine business’.

Karadzic lived in an apartment in a grim suburb called New Belgrade, and often frequented a local bar called The Madhouse, where he would drink underneath a portrait of himself.

The bar was popular among Serbian nationalists, and Karadzic would come in several times a week for wine, kebabs and sliwowitz [plum brandy].

After having a few drinks, he would reportedly often grab a gusle – a single-stringed musical instrument – and sing to fellow guests.

Despite the fact that the walls were adorned with his own portrait, neither the landlord nor the regulars recognised the ‘Butcher of the Balkans’ – or so they claimed after his arrest.

While he hid as Dr Dabic in New Belgrade, Karadzic remained one of the world’s most wanted men, and international special forces, including Delta Force, the SAS and Seal Team 6 (who would capture and kill Osama bin Laden).

In his book about the hunt for Karadzic, The Butcher’s Trail, Julian Borger tells of a botched Delta Force operation which involved a soldier dressed in a gorilla suit – flown in from the U.S. for the mission.

The plan was to lie in wait for Karadzic’s convoy in the hopes that a man in a gorilla suit jumping out on a Serbian mountain road would come as such a shock to Karadzic’s men that they would slow down – allowing for the U.S. forces to open fire and arrest him.

However, the scheme never came to fruition as Karadzic and his convoy never materialized, Borger writes in the book.

Karadzic was finally caught in 2008, after 11 years on the run, while traveling from one Belgrade suburb to another.

He defended himself during his trial, which started in 2009, denying the crimes and claiming he was a ‘man of peace.’