Any night this week, as the sky darkens and the sun slips below the horizon in the west, what appears to be a large star will rise in the east.

It’s the giant gas planet Jupiter, as close as it has been to Earth in 59 years – a treat for astronomers and amateur stargazers alike. 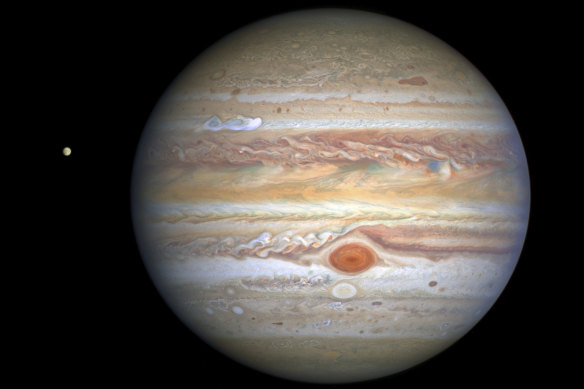 This Aug 25, 2020 image captured by NASA’s Hubble Space Telescope shows the planet Jupiter and one of its moons, Europa, at left.Credit:NASA / Supplied

“There’s not going to be any doubt,” says Perry Vlahos, former president of the Astronomical Society of Victoria. “It’s the next brightest thing in the eastern sky after the moon.

“It’s about as bright and as big as it can appear in our sky and telescopes.”

Jupiter’s orbit takes it much further from the sun than Earth’s – it’s about five times as far away. It takes 12 Earth years to orbit the sun.

You can think of it completing its long, slow orbit as the Earth quickly rotates within it. Every 13 months Earth catches back up to Jupiter, bringing us into opposition.

However, this year’s opposition is particularly special.

Every few decades the two planets’ oval orbits come particularly close – as they are this year. The next time the two planets will come this close is in 2129.

Aboriginal astronomers were aware of Jupiter, recording the planet’s movement and passing knowledge on through oral traditions. 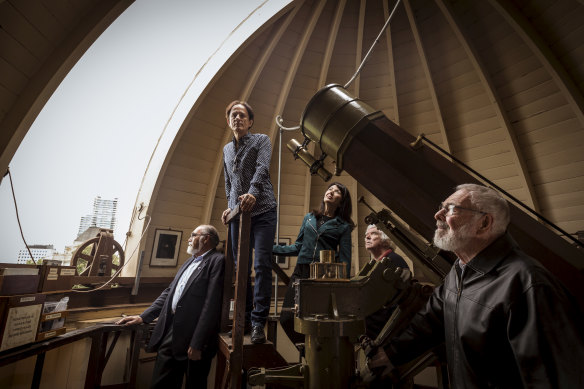 Perry Vlahos (standing) with other members of the Astronomical Society of Victoria at the Melbourne Observatory.Credit:Chris Hopkins

Aboriginal people of the Darling River in NSW call Jupiter Wurnda wurnda yarroa, a man who eats roasted yams — perhaps because of the planet’s association with dark red colours.

Jupiter’s yellow and red stripes and swirls are clouds of ammonia which rotate across the planet’s axis; the ammonia mixes with water, ice and other elements of the planet’s atmosphere to create the distinct colour.

The planet’s Great Red Spot is a storm, possibly a giant hurricane, wide enough to engulf the Earth.

Vlahos has been watching the planet through his 33-centimetre telescope.

“When you use a little bit more magnification, you can see the equatorial bands made up of clouds. And if you’re really fortunate, you can sometimes see the great salmon spot,” he says.

“It’s never looked red to me!”

In Wattle Flat, NSW, Niall MacNeill has been photographing the planet with his slightly bigger 35-centimetre telescope.

A telescope that size should be far too small to photograph a planet 590 million kilometres away in such fine detail – but a technique called “lucky imaging” has opened up astrophotography to everyone. 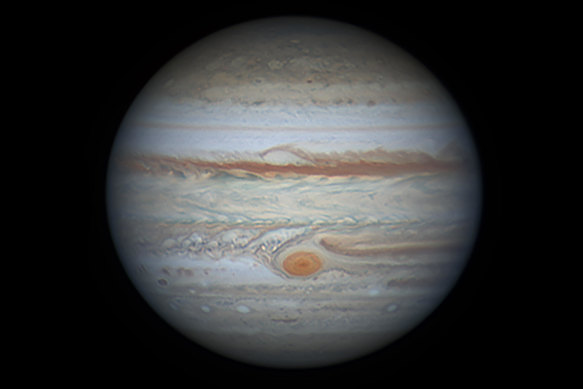 Rather than taking photos, MacNeill shoots video at 70 frames per second using green, blue and red filters. The resulting footage – 30,000 still images – is then processed by a computer which stacks the images on top of each other to produce a single, crisp photograph.

“The glorious colour palette of Jupiter can be readily appreciated, with its myriad of eddies, swirls and festoons,” he says.

Saturday night might present the best viewing, with the moon almost full. “The moon will be very near it, only a matter of about five degrees away,” says Vlahos. “You won’t be able to miss it.”

Liam Mannix’s Examine newsletter explains and analyses science with a rigorous focus on the evidence. Sign up to get it each week.