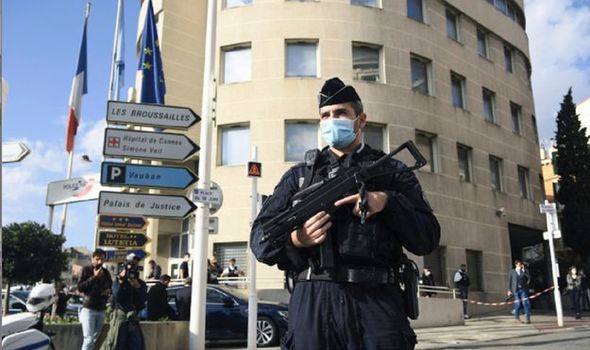 The alleged attack happened around 6am on Monday when the un-identified man – who was reportedly shouting religious slogans – threatened staff outside the main Police Commissariat in the town of Cannes.

An investigating source said: “He pulled open a car door and started stabbing.

“It was only thanks to officers wearing bullet proof vests that none of them were injured.

“The driver of the car tried to pull away, while another on the back seat of the car opened fire, and the man was severely wounded.

“He had been shouting religious slogans referring to the Prophet throughout the attack.

“The knifeman is now in a critical condition in a hospital in Cannes.”

French Interior Minister Gerald Darmanin tweeted: “A policeman from the Cannes was stabbed and wounded.

“The assailant was neutralised by his colleagues.

“I am going there immediately this morning and I give all my support to the National Police and to the town of Cannes.”

David Lisnard, the mayor of Cannes, added: “One of the officers responded with his gun.

“There are no deaths and the circumstances of the attack are being clarified.”