Sally Capp's resounding victory in the City of Melbourne elections, attracting more than double the primary vote of her closest rival, is a vote of confidence in not only her first term as lord mayor, but in her ability to face the challenges ahead. They are formidable.

Of all Melbourne's areas, the city's central district, which was abandoned for months by many of its daily inhabitants, has been financially devastated by the pandemic. Modelling by accounting giant PWC has forecast a $110 billion hit to the City of Melbourne – which takes in the CBD, Docklands, North, West and East Melbourne, Parkville, Carlton and Carlton North, South Yarra, Flemington, Kensington and 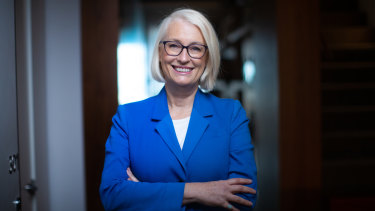 Melbourne lord mayor Sally Capp has a big job ahead of her.Credit:Simon Schluter

Port Melbourne – over the next five years. It also puts likely job losses at close to 80,000 a year. That is a serious blow to an area that contributes almost a quarter of the state's economic output.

So it should be no surprise that Ms Capp put creating jobs at the top of her list of priorities during her campaign. She promised to create 20,000 jobs a year through a mix of public and private investment, a real challenge after the council’s own budget went into the red this year for the first time in 30 years. Its revenues fell short by just over $100 million.

The City of Melbourne will lean heavily on the state government's budget for support. Ms Capp worked closely on the outdoor dining package, which came with a $100 million funding boost mostly

from the state. When you consider there are more than 16,500 businesses registered in the City of Melbourne, which support more than 479,000 jobs, any support to get them back on their feet is surely money well spent. It would not be a surprise to see more funds directed to them from this month's state budget.

The other big challenge for the CBD is whether, as social distancing restrictions ease, people are willing to return to the city centre in anywhere near pre-pandemic numbers. Then more than 900,000 would commute into the CBD each day – a figure that was expected to increase to 1.4 million by 2036. There is sure to be reticence from many who did work in the CBD's office towers to reacquaint themselves with their office space.

On top of that challenge is how even a reduced number of office workers commute to the city. What is concerning, as Dr Elizabeth Taylor, a senior lecturer in urban planning and design, pointed out in The Age's Melbourne after COVID series, is the prospect of fewer people heading into the city but a growing number using their cars owing to fears of travelling on public transport.

For the City of Melbourne, which has been trying to decrease the number of cars to free up space for more pedestrians, public transport and bikes, this is an alarming prospect.

Much of what has made Melbourne one of the world's most liveable cities is its sporting and arts precincts, vibrant food culture and boutique retail laneways, most of which are located in the CBD. These are also some of the hardest hit sectors during the lockdowns.

As Melbourne's lord mayor, Ms Capp has her work cut out bringing that back to life. But with the support of the state government, and the broader Melbourne community, we would hope that while the road to recovery may be long, the CBD will eventually return to its rightful place as one of Australia's most vibrant and compelling places to live, work and play.

Note from the Editor

The Age’s editor, Gay Alcorn, writes an exclusive newsletter for subscribers on the week’s most important stories and issues. Sign up here to receive it every Friday.