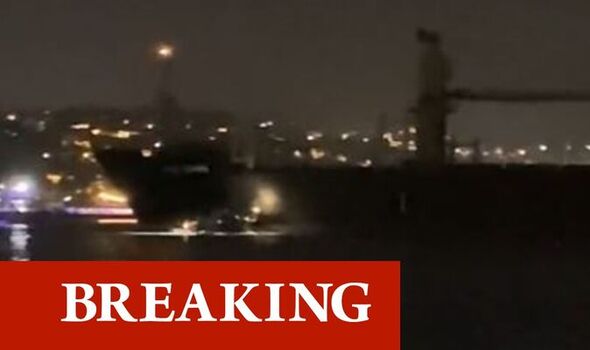 A tweet by Steve Herman, chief national correspondent of Voice of America news, said: “Cargo ship #LadyZehma, carrying 3,000 tons of corn from #Ukraine, has drifted aground in the Bosphorus strait, reportedly halting shipping through Istanbul.” The Istanbul governor’s office confirmed the 173-meter vessel was safely grounded and anchored after a rudder failure around 6pm GMT.

No one was hurt and Coast Guards were attending, it said.

Earlier this week the Joint Coordination Centre – run by the United Nations, Ukraine, Russia and Turkey after a grains-export deal was reached – said the Lady Zehma was cleared to depart Ukraine’s Chornomorsk port for Ravenna, Italy, with 3,000 tonnes of corn.

Writing on Telegram earlier this week, Ukraine’s Minister of Infrastructure Oleksandr Kubrakov said: “Today, six ships departed from the ports of Odesa, Chornomorsk, and Pivdennyi at once.

“Among them is the Karteria ship, chartered by the UN World Food Program to help the population of Yemen.

A total of 183,000 tonnes of Ukrainian grain is on board the ships Seajoy, Lady Zehma, Saffet Aga, Simas, Michallis, and Karteria, he pointed out.

Mr Kubrakov added: “In less than a month of the Initiative’s work, we exported almost one and a half million tonnes of agricultural products, which is quite a significant result. However, we have to send 100-150 vessels per month with a total monthly capacity of 5 million tonnes from the three ports of Greater Odesa.”