Boris Johnson’s girlfriend Carrie Symonds was front and centre among his staff as the new Prime Minister gave his first speech in Downing Street today – but she didn’t walk into Number 10 with him.

The former Conservative Party communications director, 31, has not been seen with Mr Johnson since leaving his home in Oxfordshire on Sunday.

She did not attend the ceremony where Mr Johnson, 55, was announced as the new Tory leader at the Queen Elizabeth Conference Centre in London yesterday.

The rest of his family, including father Stanley, sister Rachel and brother Jo were all in the audience to celebrate with him, regardless of their differing views on Brexit.

But today, as Mr Johnson met with the Queen, she appeared outside Downing Street alongside Sir Eddie Lister, Mr Johnson’s transition chief and incoming senior adviser.

Sporting a shadowed daisy red Ghost dress, Miss Symonds appeared smiling and happy as she waited for her partner to return from Buckingham Palace. 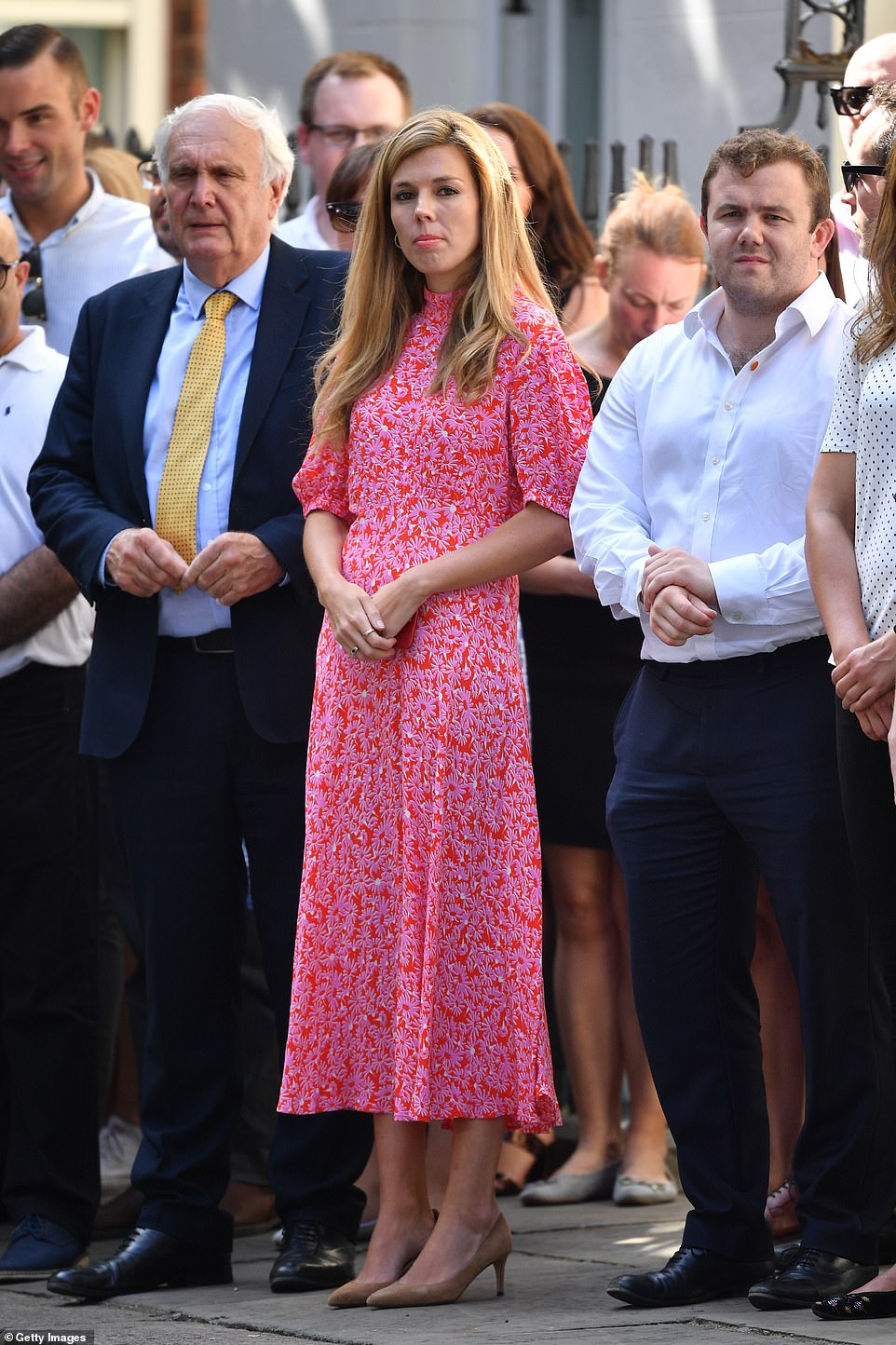 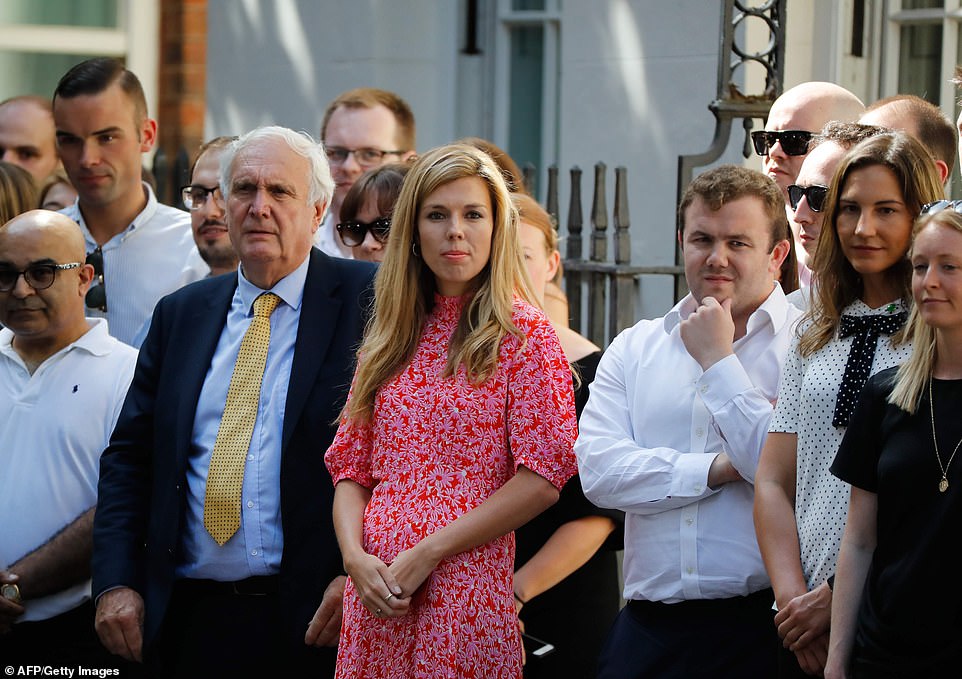 The former Conservative communications director, 31, had not been seen with Mr Johnson since leaving his home in Oxfordshire on Sunday – but she appeared outside Downing Street today as Mr Johnson met with the Queen 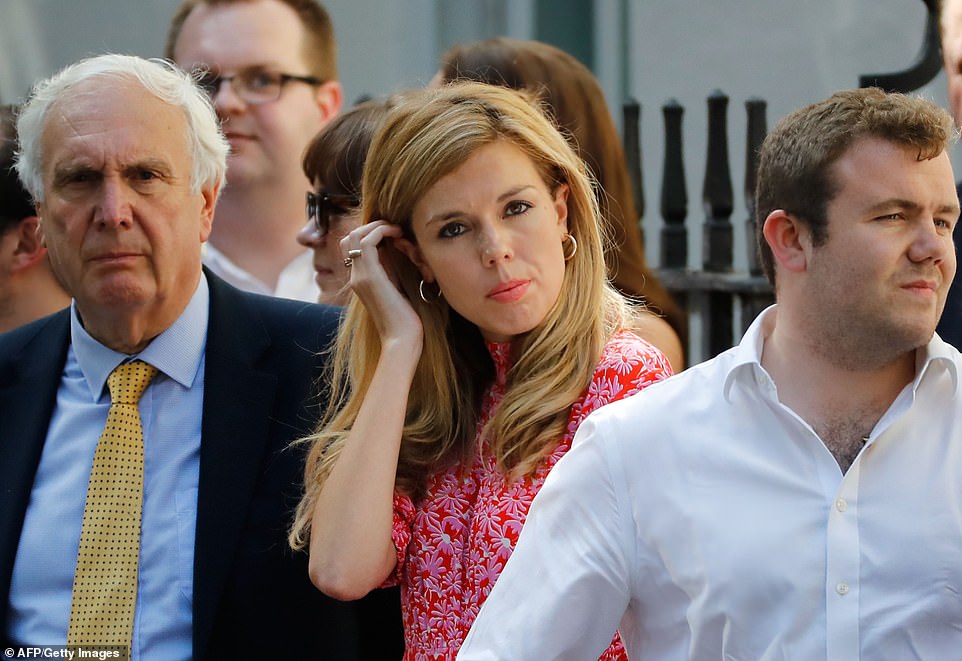 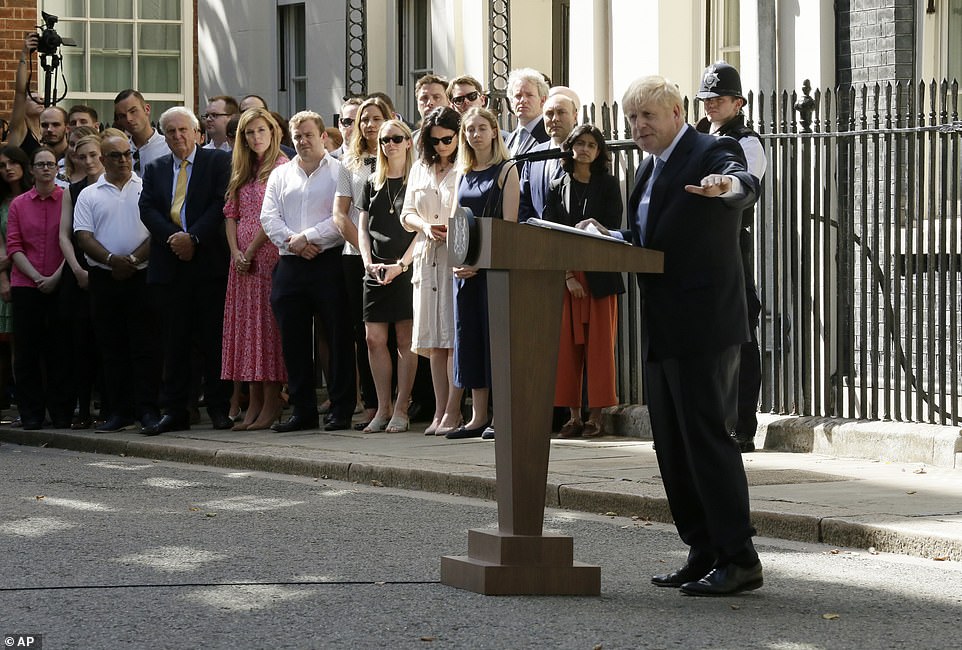 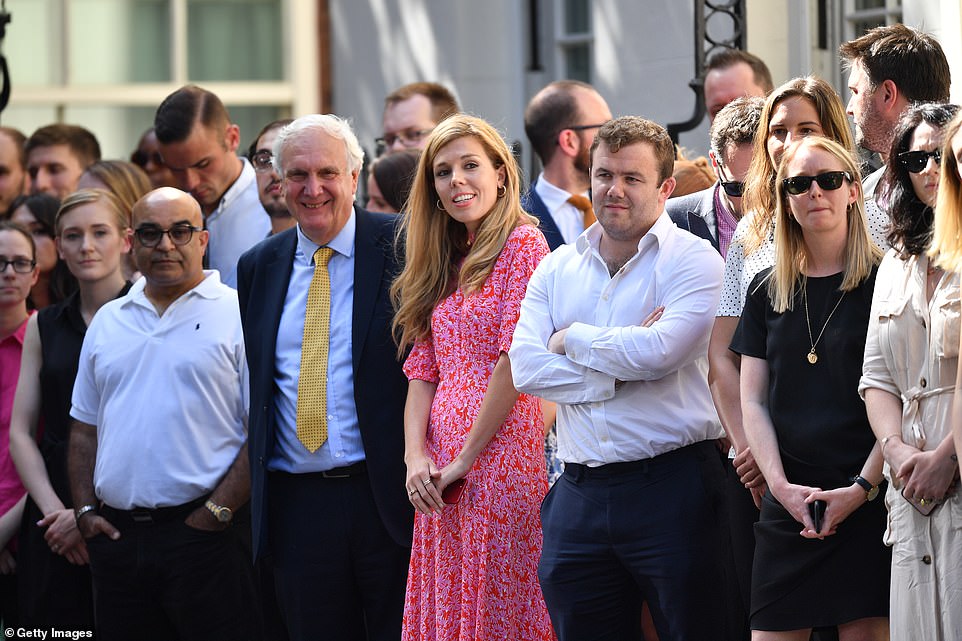 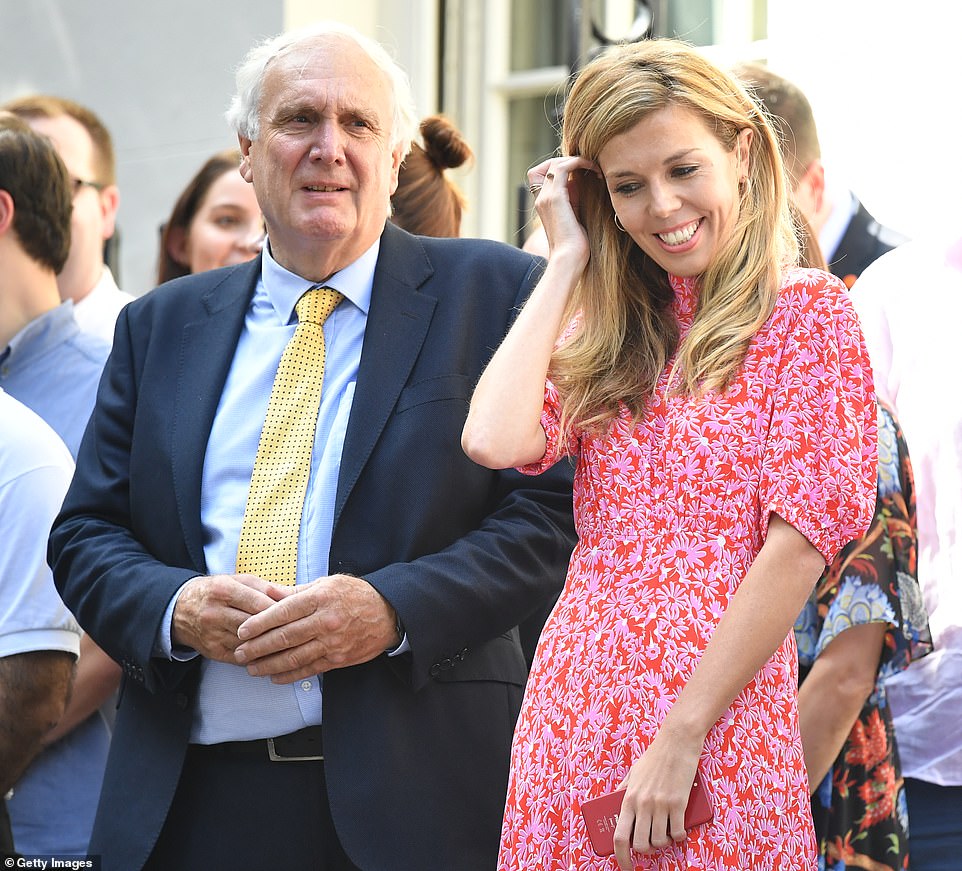 Sporting a shadowed daisy red Ghost dress, Miss Symonds appeared smiling and happy as she waited for her partner to return from Buckingham Palace 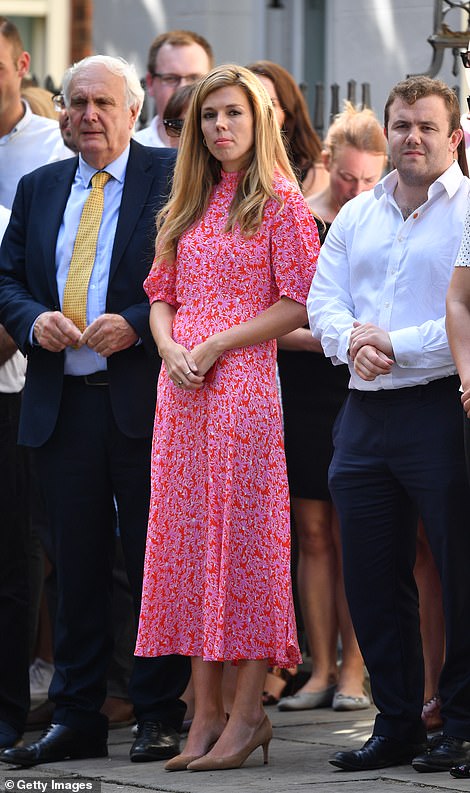 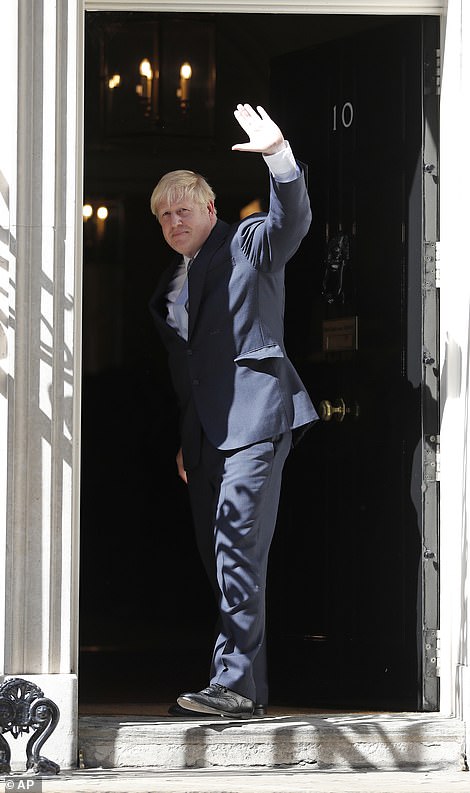 Despite Miss Symonds’ presence in Downing Street, Boris Johnson walked into Number 10 alone after his speech

Today, as Mr Johnson arrived at Buckingham Palace to formally take up his duties as Britain’s new Prime Minister it appeared Miss Symonds was not to be seen.

But as Mr Johnson, who is the 14th British prime minister to serve under Queen Elizabeth II, was talking with the Queen she appeared outside number 10.

It is thought Miss Symonds wants to keep a low profile around her partner’s celebrations because he is not yet divorced from estranged wife Marina, with whom he has four children, and she ‘did not want to overshadow his moment’.

New prime minister’s traditionally pose with their husbands or wives upon entering number 10 for the first time, but sources had said Miss Symonds feared her presence would be a ‘distraction’.

There was no such sign of that today, however, as she appeared in a £120 Ghost shadowed daisy red dress. She appeared smiling and happy as she waited for her partner to arrive from Buckingham Palace.

Miss Symonds is expected to play an active role behind the scenes and is expected to accompany Mr Johnson to ‘schmooze’ MPs at private parties at Chequers as he tries to win their support for his approach to Brexit.

Miss Symonds, daughter of Matthew Symonds, co-founder of the Independent, works in PR for Oceana, an organisation which campaigns for policies to protect and restore the world’s oceans, and will remain in the role despite moving into number 10. 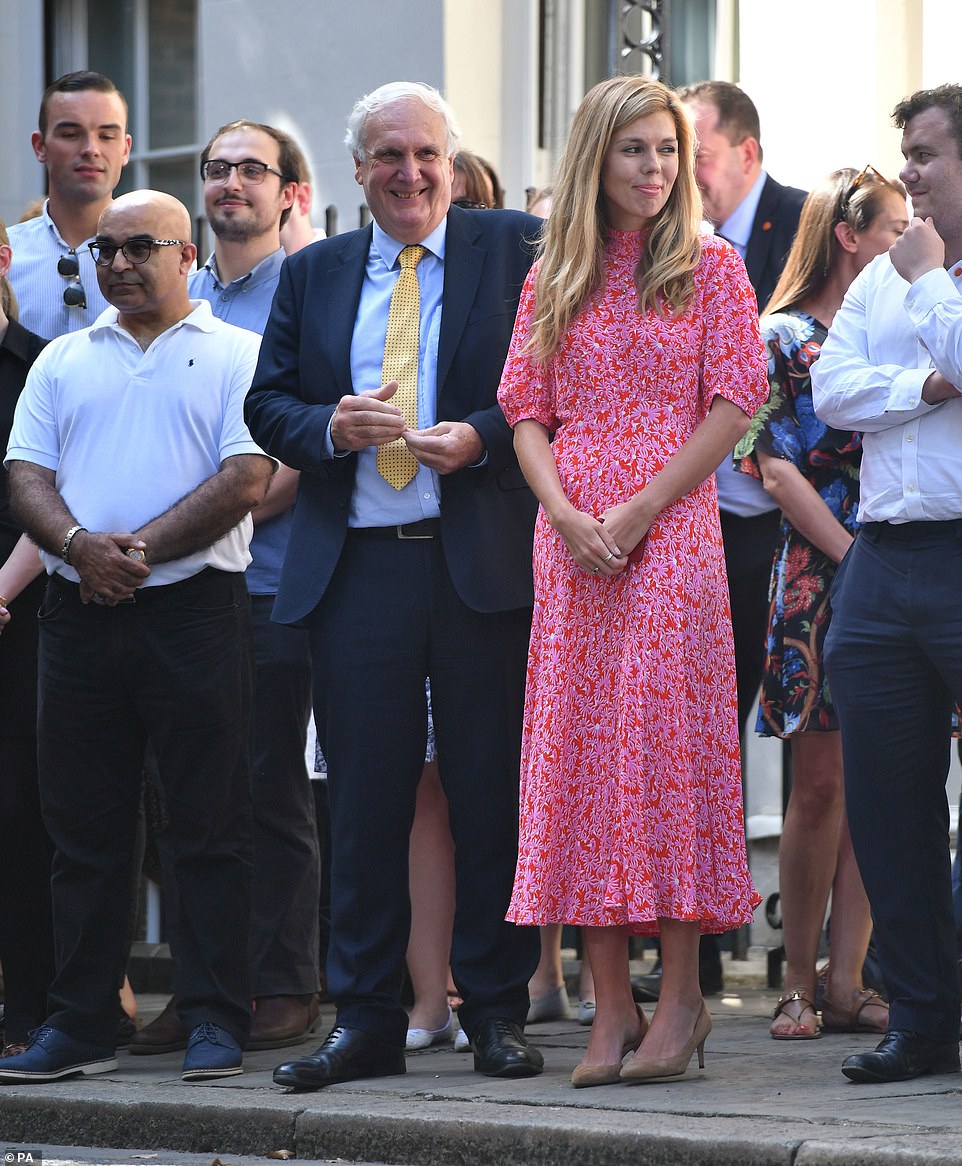 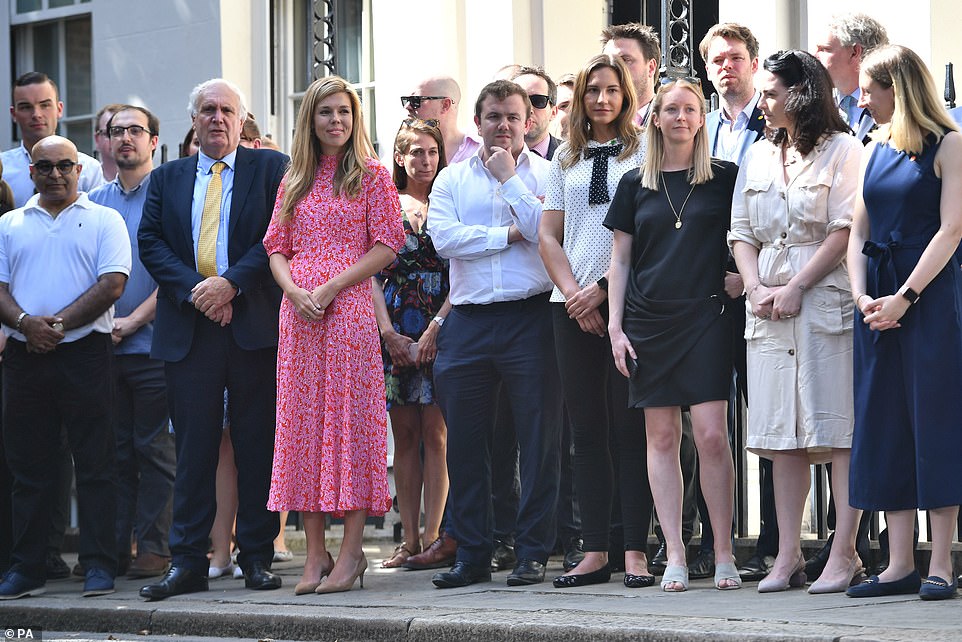 She stood next to Sir Eddie Lister, Mr Johnson’s transition chief, in a group of Downing Street staff waiting outside 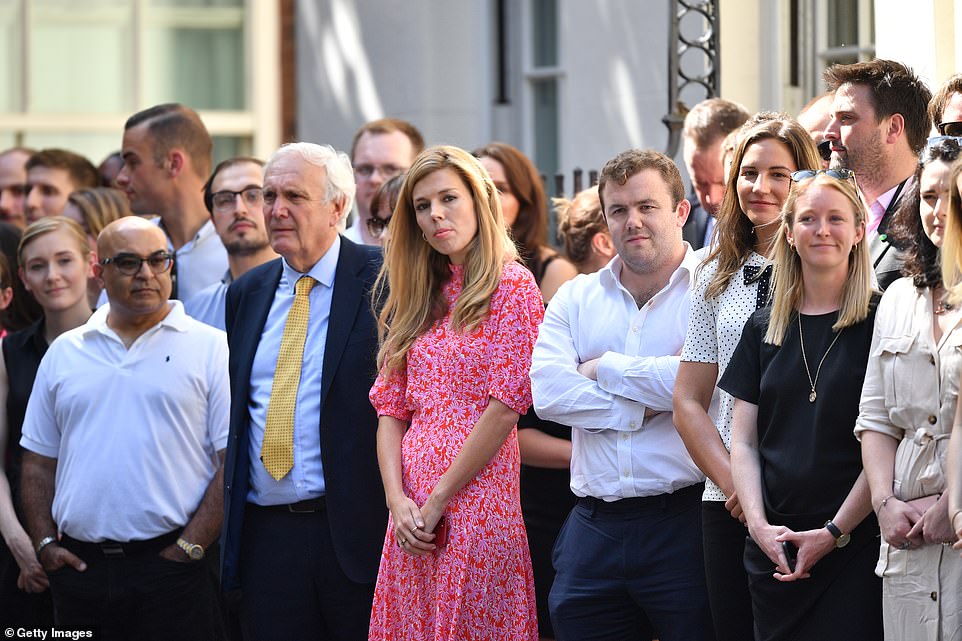 Miss Symonds, who until recently worked for the Conservative party, listened as Mr Johnson spoke to the nation 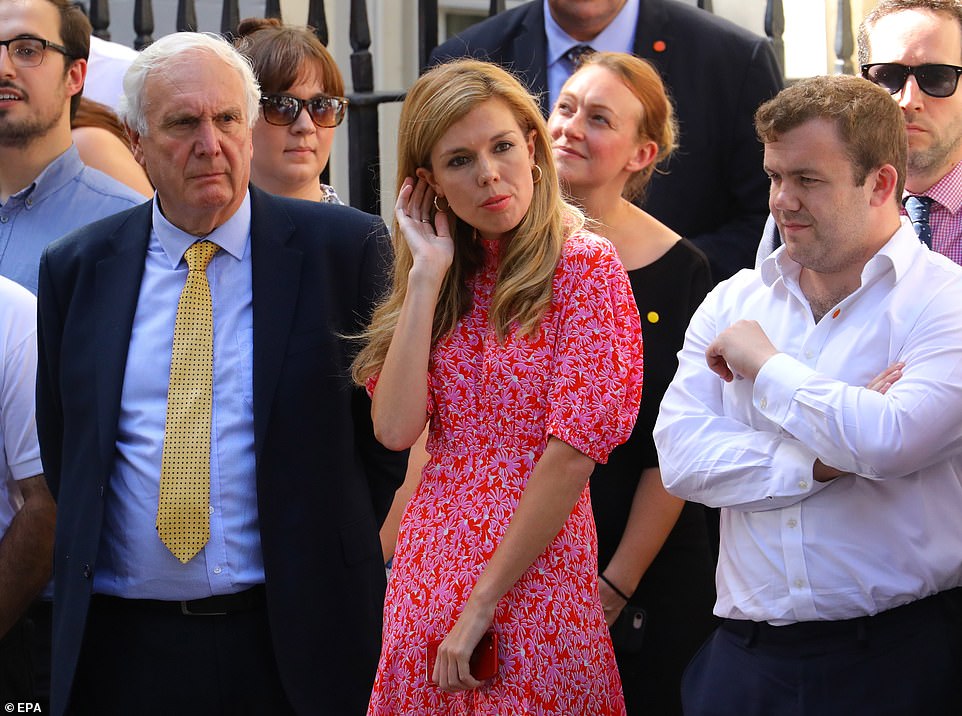 Her appearance came as a shock to many, with some expecting her to stay away from the high-profile occasion this afternoon 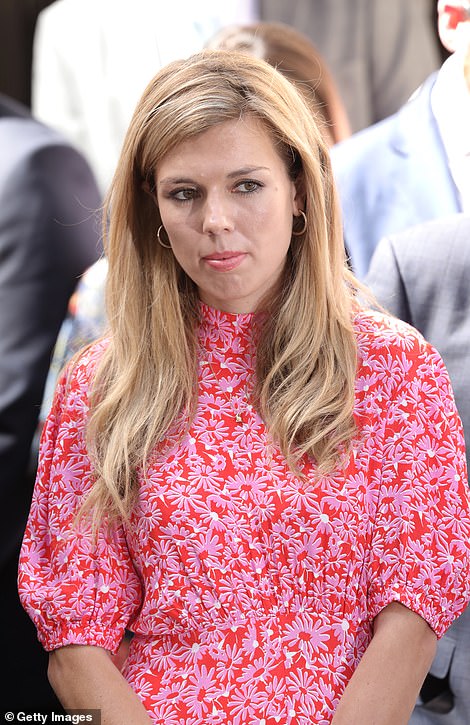 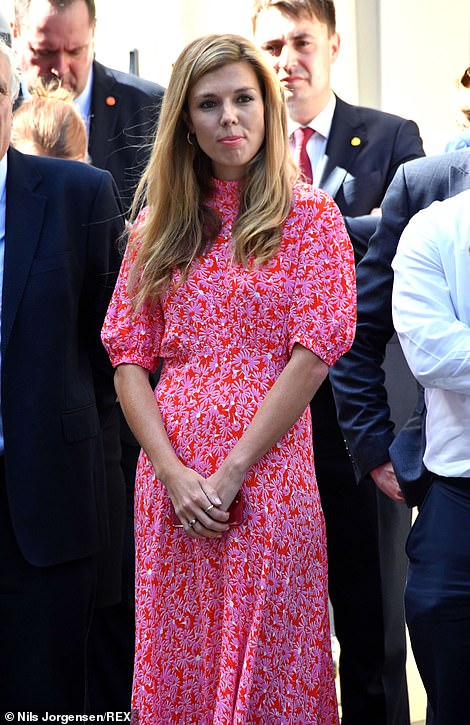 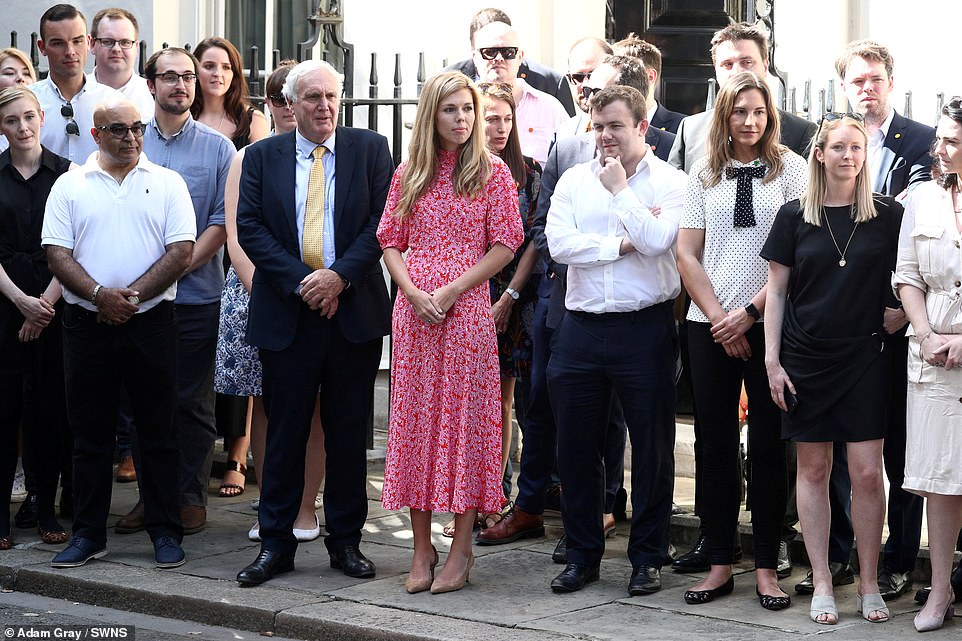 As Miss Symonds looked on, Mr Johnson spoke at the lectern and promised he would ‘change this country for the better’

They have appeared in public together before with Carrie attending her boyfriend’s campaign launch in June to show her support.

Last week the Mail revealed Miss Symonds had told friends she doesn’t want to be ‘in the limelight’ when Mr Johnson fulfils his lifetime ambition of becoming PM.

The couple were seen leaving Mr Johnson’s home in Oxfordshire on Sunday but were not photographed together. They have been together for more than a year and have been living together at her flat in Camberwell, south London.

Last week they completed a purchase of a three-storey £1.3million Victorian home in Camberwell and Miss Symonds was seen moving her things in with mother Josephine Mcafee.

The couple caused controversy amid reports they wanted to use taxpayers’ funds to get new furniture for number 10, with Miss Symonds refusing to move any of hers in – although sources close to Mr Johnson have since denied the reports.

They also hit the headlines last month after police were called to her flat in Camberwell following a blazing row between the couple – with a recording of the clash handed to The Guardian by neighbours.

But sources stress the couple are ‘stronger than ever’ and are fully prepared for life in No. 10. 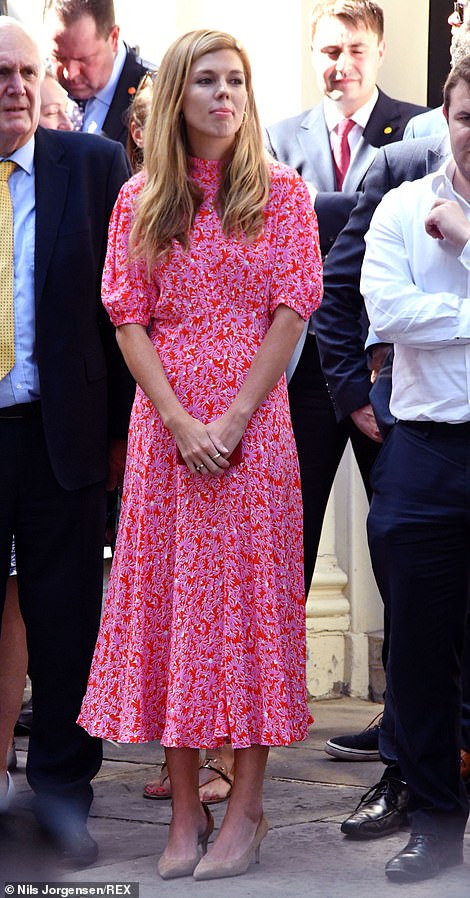 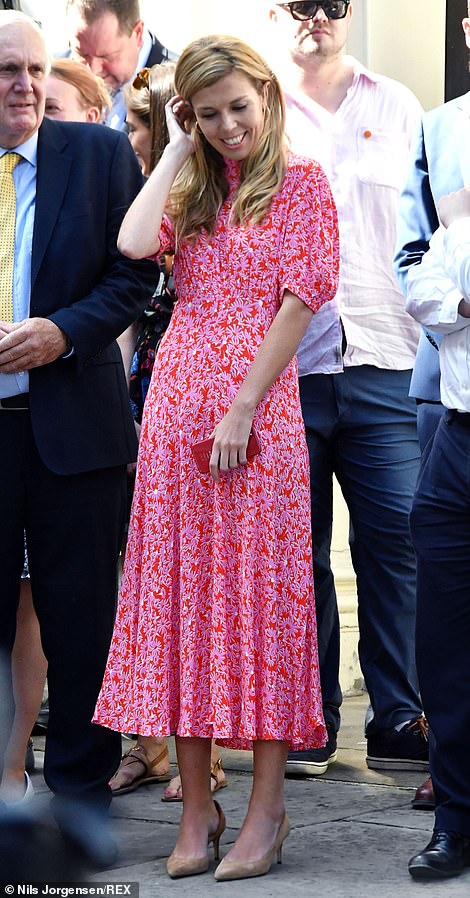 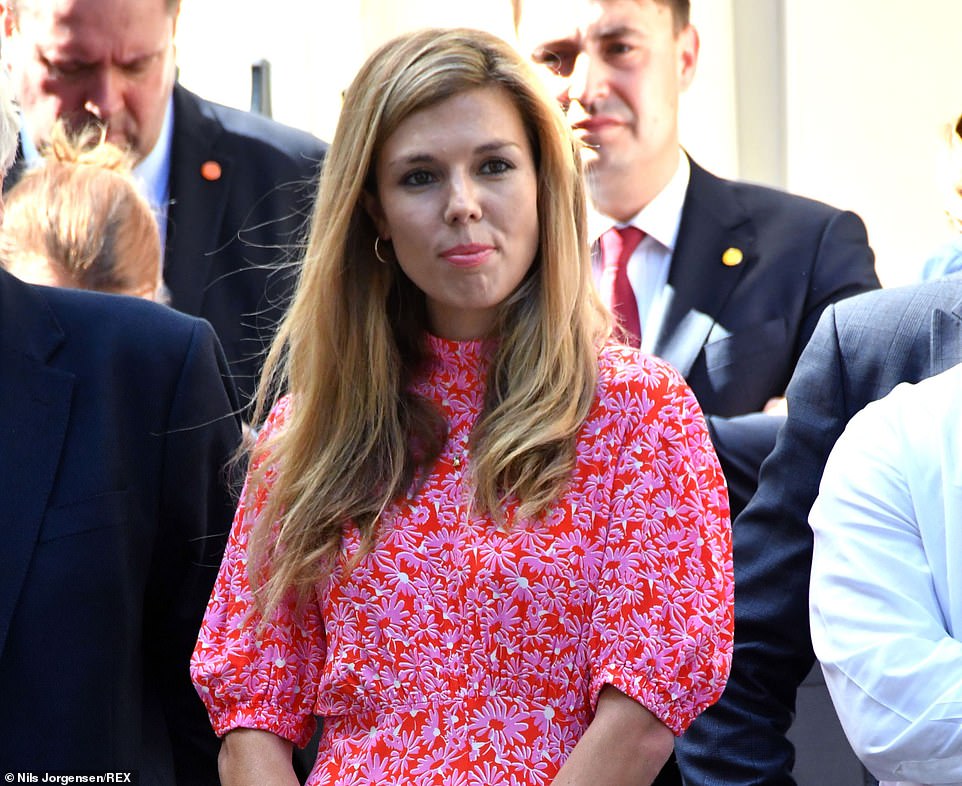 From being almost unheard of outside of political circles at the start of the year, Miss Symonds is now in Downing Street 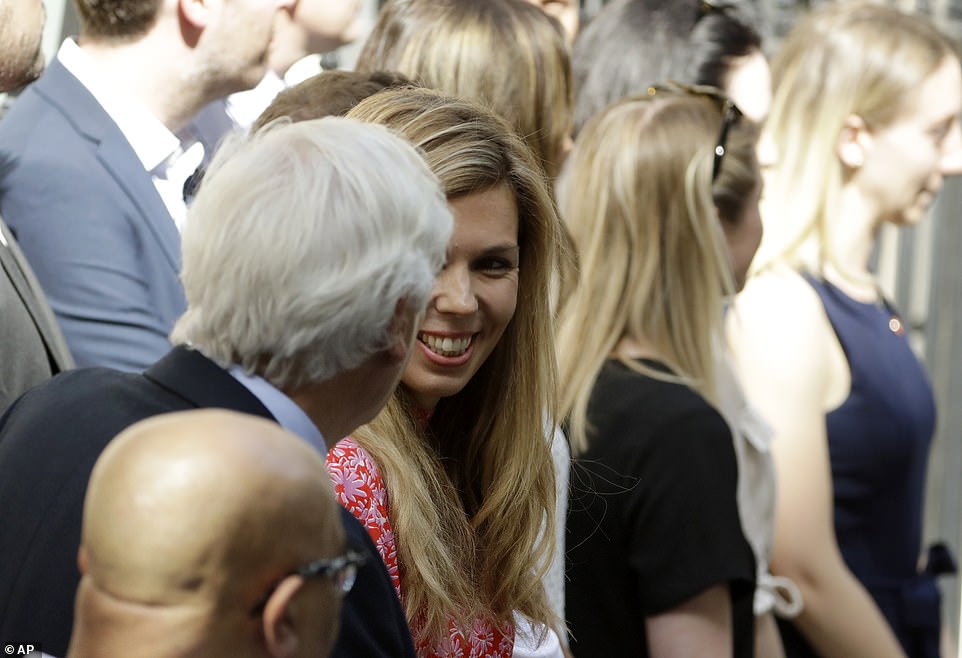 Since the ‘row’ she has been pictured with Boris holding hands while sitting together at a table in Sussex countryside, although they were later accused of ‘staging the moment’.

She was also seen trying on rings at a Notting Hill jewellers with close friend and FGM campaigner Nimco Ali earlier this month.

Although he has been all too willing to attract publicity for his political advantage, Mr Johnson, 55, has been reticent when it comes to details of his private life.

He met his first wife, Allegra Mostyn-Owen, while they were students at Oxford, and they wed in 1987, but the marriage was annulled in 1993.

His second marriage, to Marina Wheeler, ended last year after 25 years together, during which they had four children. 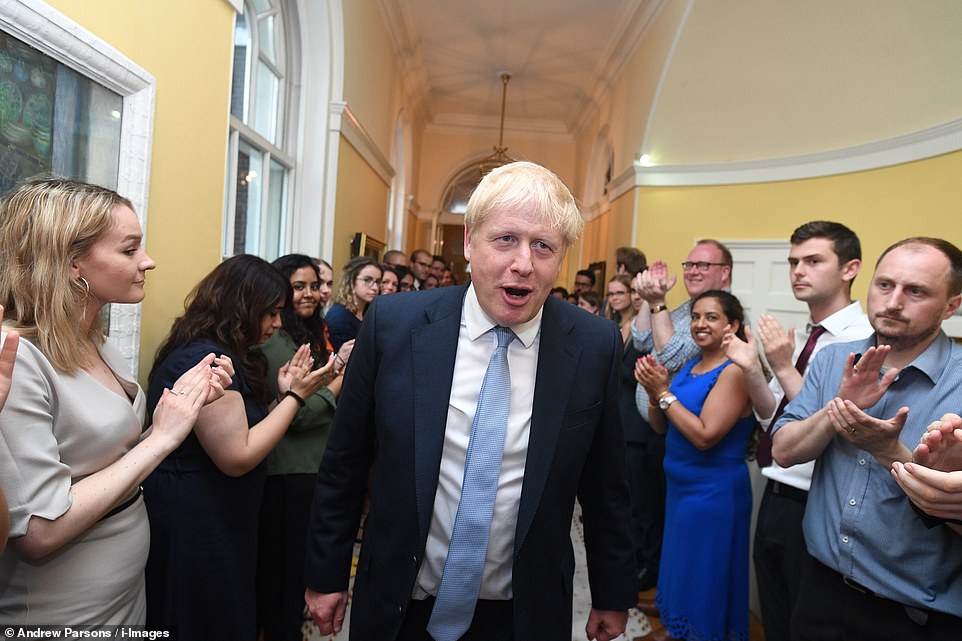 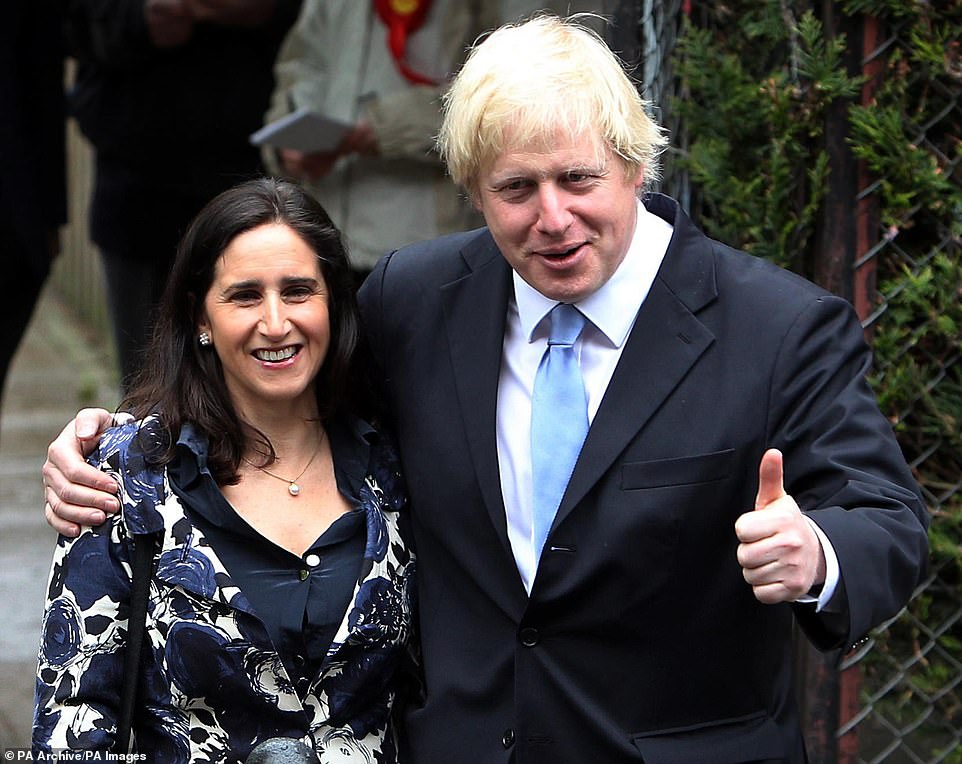 Friends have previously said Miss Symonds does not want to be a ‘distraction’ due to Johnson’s impending divorce from second wife Marina, pictured with him 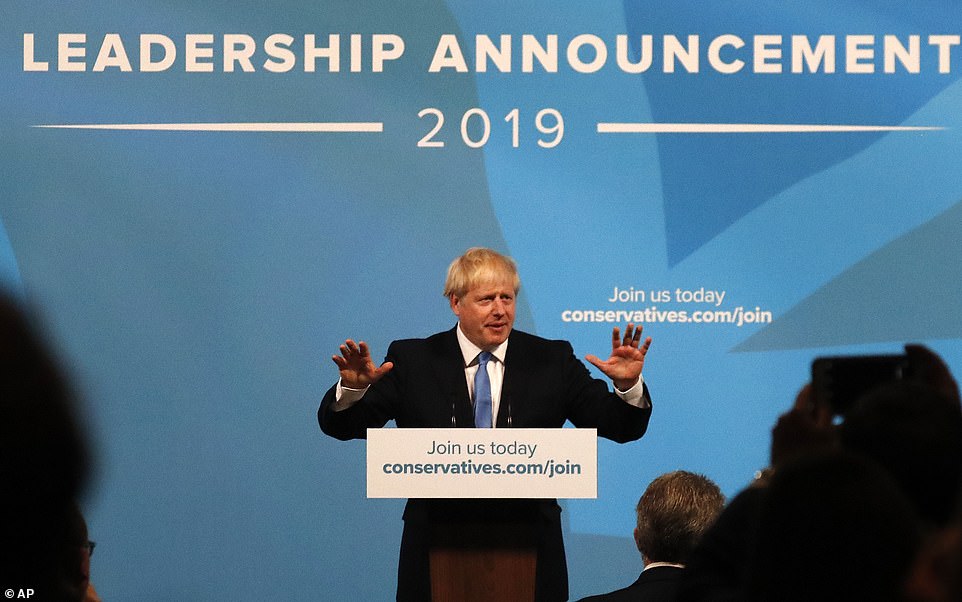 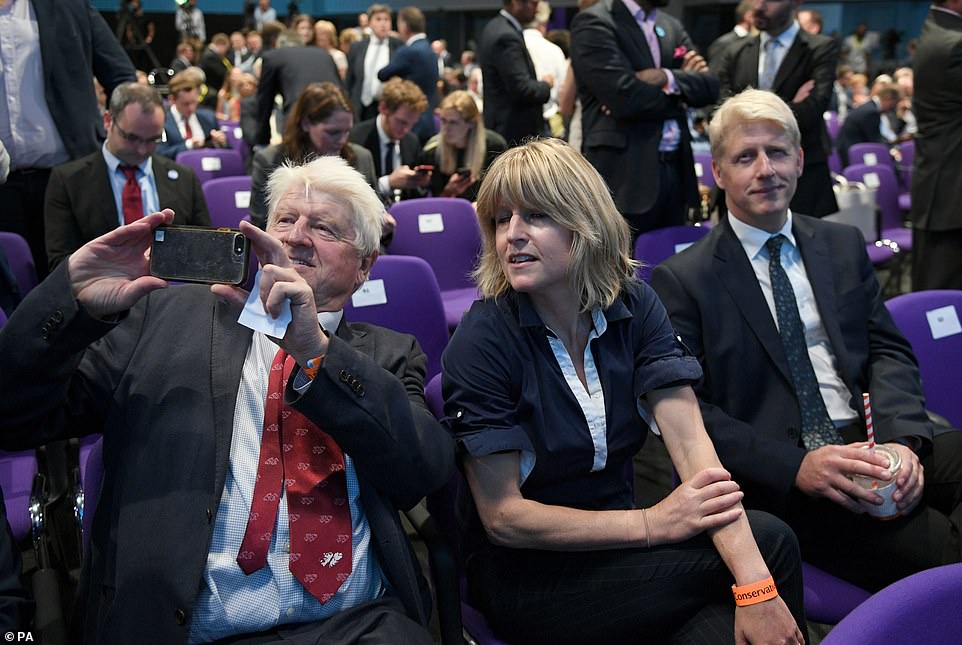 But Mr Johnson’s father Stanley (left), sister Rachel (centre), and brother Jo (right) were all at the centre to see the result

The marriage was turbulent – in 2004 he was sacked from the Tory frontbench over a reported affair with journalist Petronella Wyatt and the Appeal Court ruled in 2013 that the public had a right to know that he had fathered a daughter during an adulterous liaison while mayor of London in 2009.

Questions about his character were often raised during the leadership race, with a Tory member at a hustings event in Perth asking him whether a good prime minister needed to be ‘a loyal husband and father’.

He was warned that his refusal to answer questions on the issue would mean that voters ‘come to their own conclusion and it may not be a favourable one’.

Mr Johnson said: ‘Then I’m going to have to live with that.’

Despite the reservations some Tory members have, Mr Johnson’s status as a favourite of the Conservative grassroots was confirmed in the leadership election which saw him trounce rival Jeremy Hunt.

He also secured the votes of more than half of Tory MPs in order to make it through the parliamentary stage of the contest, including some pro-EU Conservatives who believe he can unite the party. 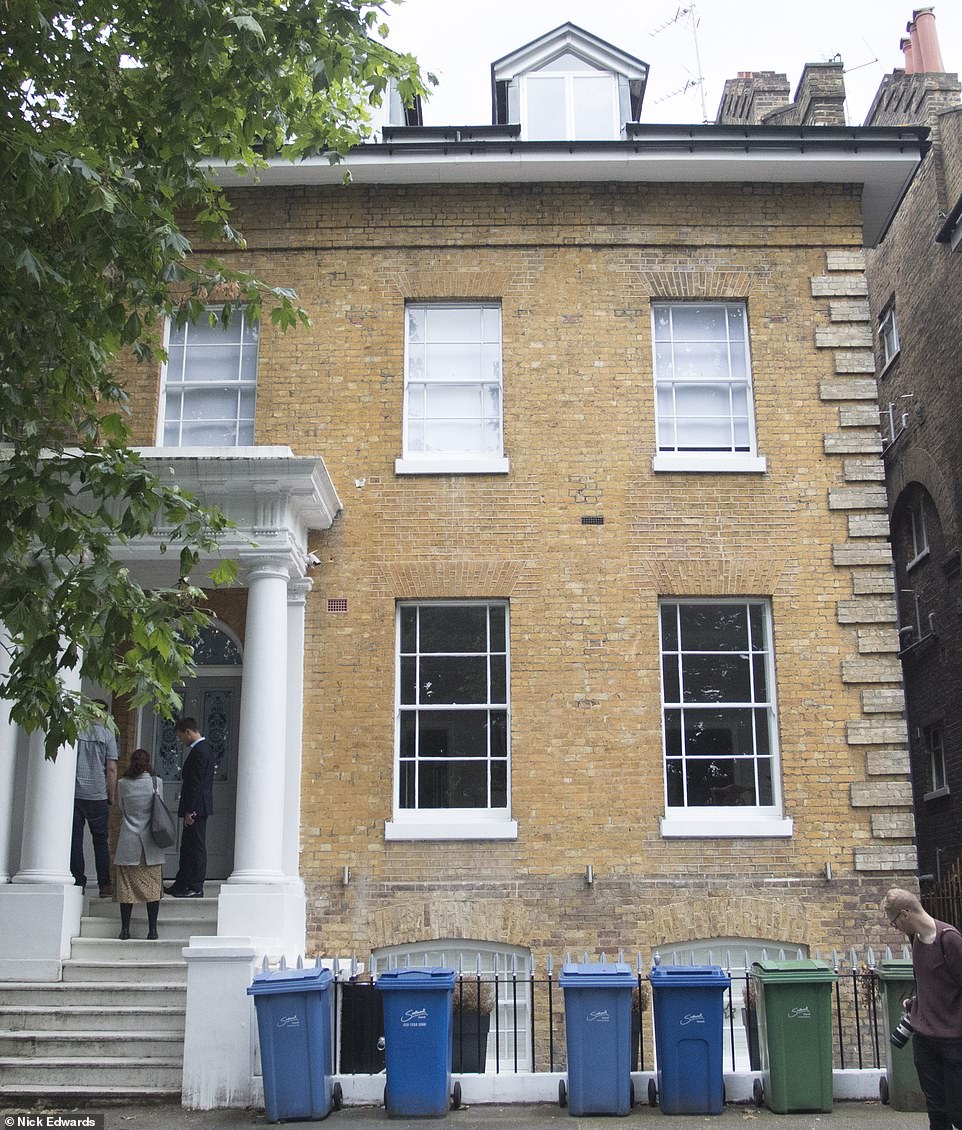