Five of Victoria’s 12 TAFE institutes reported a deficit last year, despite each receiving millions of dollars in COVID-19 crisis support payments from the state government.

The revenue woes have led the Andrews government to extend a 12-month funding guarantee to most of the state’s TAFEs to ensure their viability, as some warn their post-pandemic recovery is uncertain. 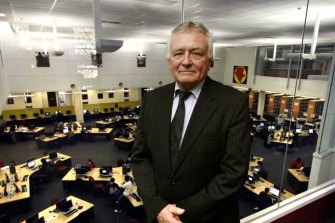 The guarantee, called a “letter of comfort”, is a pledge to each TAFE, binding until April 2022, that the state government will bail it out if it’s at risk of insolvency.

It is the second year in a row that TAFE institutes have been given this guarantee, after nine reported deficits last year.

William Angliss Institute, which specialises in food, tourism and hospitality training, said COVID-19 had such a “devastating impact” on those industries that its situation might deteriorate further this year. The institute posted a more than $1 million deficit, despite receiving $6.2 million in crisis support funding and $3.5 million in business continuity grants from the Victorian government, which it used to avoid staff cuts and help it switch to remote learning.

“Industry restrictions, student mobility and a flow-on pipeline effect will combine to potentially make 2021 even more challenging for William Angliss Institute than 2020,” it said.

Seven TAFE institutes posted a surplus, although most did so only after receiving millions in crisis funding. Multi-campus TAFE Melbourne Polytechnic, for example, posted a $4.1 million surplus but received $15 million in crisis support and $14.2 million in continuity grants to deal with the pandemic.

“COVID-19 had a material impact on Melbourne Polytechnic’s net result in 2020 as a result of lower revenue due to lower student numbers, both domestic and international,” it said.

Bruce Mackenzie, a former director at Holmesglen and an expert on vocational training, said many Victorian TAFEs “simply don’t have enough money to operate without government support. Any institute that requires a letter of comfort has got serious financial difficulties.”

The pandemic had played a part in their problems, but so too had a government failure to determine the true cost of running many courses. “Funding rates are not sufficient for institutes to be able to manage their books effectively,” Mr Mackenzie said, noting this problem was most acute in regional Victoria where student markets are thinner. 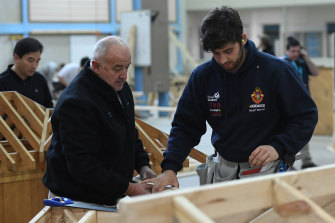 A master and apprentice carpenter at Holmesglen TAFE Chadstone campus in 2017.

Matthew Bach, the opposition’s spokesman on higher education, training and skills, said the annual reports revealed the financial viability of many TAFEs remained under threat, 12 months after the sector posted a combined loss of $116 million for 2019.

“Coming from this perilous and unsustainable position, we now see the TAFE sector has been reliant on crisis funding through COVID,” Dr Bach said. “TAFEs are vital for the educational needs of so many Victorians, and for our economic recovery. They must be placed on a sustainable footing.”

The Andrews government has made TAFE reform one of its main education calling cards, including introducing free TAFE for in-demand skills and last week committing $99.2 million to boost TAFE funding rates.

Acting Premier James Merlino said the TAFE sector had been hurt by COVID-19 but there was no inherent threat to its viability.

“We’ve had great success through our free TAFE program, but just like our universities, our TAFEs have suffered with the challenges of COVID and it’s appropriate that that support by the government has been provided,” he said.