For the first time since the pandemic took hold in March 2020, Australians were ready to enjoy a holiday free of international and domestic border closures, and without any threat of COVID-19 lockdowns.

But when passengers arrived at Melbourne Airport this week, they were forced into long queues and faced lengthy delays, predominantly as a result of coronavirus-related staff shortages. 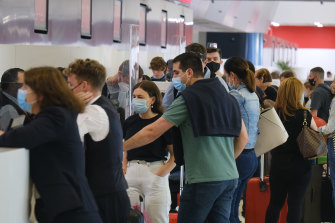 Travellers at Melbourne Airport on Wednesday. Tullamarine had its busiest day in two years last Friday, and Thursday is expected to be the second busiest.Credit:Luis Ascui

“COVID-19 decimated airlines and airports and resulted in thousands of highly skilled workers being stood down or made redundant,” Melbourne Airport chief executive Lyell Strambi said.

“The airlines and their suppliers are now scaling up their workforce but given the safety-critical nature of the jobs they do, recruitment and retraining can take time.”

Chaotic scenes have been reported at airports where queues at baggage carousels and security check-ins have ballooned. Passengers are being asked to arrive at least two hours before domestic flights, and three hours for international flights.

So, how did we get here?

It was a confluence of factors. Hundreds of thousands of people are travelling again after two years of pandemic-related restrictions; some aviation staff have permanently left the industry and not been replaced, leading to staff shortages; some workers have contracted COVID-19 and are unable to work; and until early this week, airline staff who were household contacts were undertaking seven days’ isolation.

Between 20 and 50 per cent of Qantas employees in some areas have been unable to work after testing positive to the virus or isolating as close contacts, according to the airline.

More than 1.72 million people passed through Melbourne Airport in March, just 7600 fewer than the number recorded in March 2020. About 1.5 million domestic travellers arrived at Tullamarine, 260,000 more than the March 2020 figure.

Tullamarine had its busiest day in two years last Friday as 90,000 travellers passed through. Thursday is expected to be the second busiest, with 88,000 passengers to stream through the airport, 80,000 of those on domestic flights.

The airlines, airport and union all blame the chaotic scenes on staff shortages.

Efforts to recruit more staff have so far fallen short. There are 120 vacancies across security, cleaning, customer service, maintenance and management, according to Melbourne Airport.

Staff from the rest of the airline and airport businesses have been asked to work in customer-facing roles to help alleviate the pressure.

And while Melbourne Airport has not been hit with the same level of security staff shortages as in Sydney, the situation is tight. 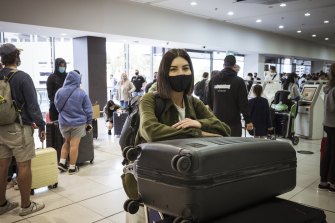 Amy Tregea, in Melbourne for an overnight work trip, faced some delays at Melbourne Airport on Tuesday, but not as bad as those on Monday.Credit:Chris Hopkins

Transport Workers’ Union assistant secretary of the Victorian branch Mem Suleyman attributed the staff shortages to Qantas’ decision to shed thousands of workers during the pandemic and outsource the jobs of more than 2000 ground crew, including baggage handlers, about one-quarter of whom were in Melbourne. The union is challenging the decision in court.

“This has naturally created a crisis in Melbourne now. Qantas and Jetstar could hide last year over their decision [in August 2020] because we’ve been in and out of lockdowns,” Suleyman said.

“Now people have resumed flying there’s a crisis and the crisis is that people don’t want to work for [cargo handling provider] Swissport because of insecure working arrangements.”

The Age sought comment from Swissport, which did not respond by deadline and referred inquiries back to Qantas.

In a statement, Qantas said: “We reject the union’s claims that this is due to outsourcing.

“As with a lot of industries around Australia, aviation is being impacted by the isolation requirements for close contacts of COVID cases.”

Aviation staff have been exempt from close contact isolation requirements since January when exemptions for critical staff were introduced at the height of the Omicron wave, but airlines had not been taking it up.

Qantas said until last Friday it was able to manage staff absenteeism caused by close contact isolation, but it had since become unmanageable. 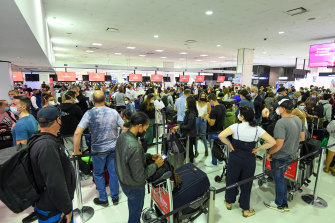 The airline will now require affected staff to come back to work per government guidelines, which state they must travel directly from their home to work, wear a mask at all times and frequently test themselves over the course of what would have been their isolation period.

Qantas said it had deployed bigger aircraft usually used for international flights, such as the 787 Dreamliner, for domestic trips to ensure more people could travel.

Virgin Australia said there were additional resources at airports across the country to deal with the anticipated Easter rush.

“We appreciate the patience of all travellers as our team continue to work around the clock to assist our airport partners and help our guests get to their destinations on time,” it said.