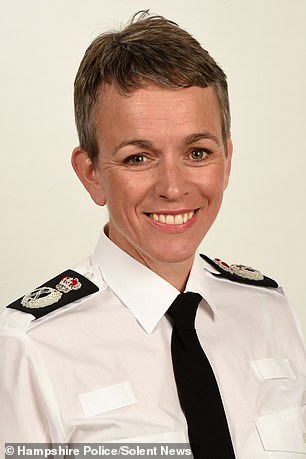 The Chief constable of the force where five officers have been sacked for ‘abhorrent’ racist language says the police’s lack of diversity ‘is not ok’.

Olivia Pinkney of Hampshire Police said she is very aware her senior leadership team team ‘look the way they do’ and admitted she is concerned by the overall whiteness of the force.

The highest ranking officer from a minority background in the county is a chief inspector.

She said: ‘[It] is a concern. If we look at the Chief Officer group of this constabulary, we are half female and have all sorts of other diverse characteristics – but we are all white.

‘I’m really aware of that and so I’m doing what I can to mitigate in the short term and I have a very detailed plan, which also national policing has as well, to try and shift that balance.

‘It’s not ok that we look like we do across UK policing and I know my colleagues and I are all determined to shift that.’

Six members of a serious organised crime team were caught using ‘the whole array’ of offensive language in a series of covert recordings after a complaint was made about their behaviour. 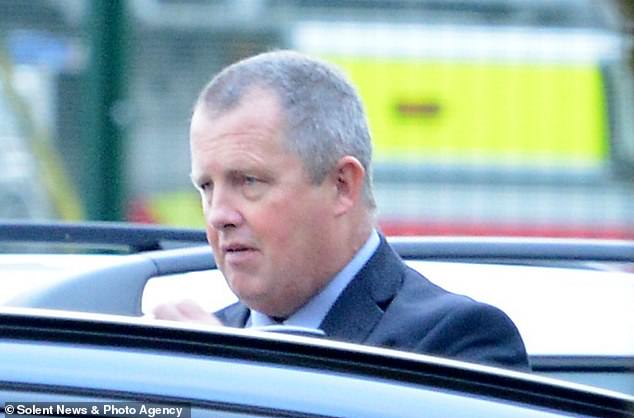 Pictured: Retired Detective Inspector Tim Ireson, who would have been dismissed had he not already left Hampshire Constabulary

The officers within the SOCU unit at Northern Police Investigation Centre in Basingstoke were accused of either making ‘abhorrent’ comments, or not challenging others when those remarks were made.

Bugging devices placed in the unit’s offices between March and April 2018 recorded them calling women ‘w****s’ and ‘s***s’, comparing black officers to dogs and saying Albanians should be killed with ‘nerve agent’, a disciplinary hearing was previously told.

Prosecutor Jason Beer QC said that although the recording only lasted 24 days the investigation uncovered ‘enough racism and sexism to last a lifetime’.

Last week, a disciplinary panel ruled their behaviour was so serious they must all, with the exception of the most junior officer, be dismissed from the force.

Panel Chair John Bassett said the unit’s conduct was ‘shameful’ and the ‘antithesis’ of what the public expects.

Chief Constable Pinkney cited the example of Commander Alison Heydari who left Hampshire Constabulary last year after two decades to join the Metropolitan Police and is currently the most senior black female police officer in the UK. 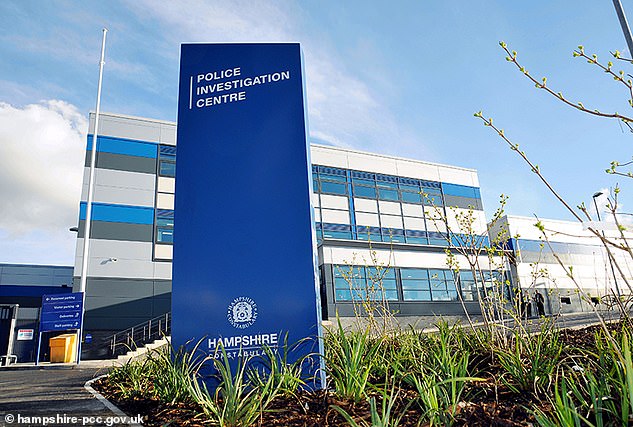 ‘In fact, the serving black commander in the Met was a fantastic superintendent here and moved on promotion to the Met with our support encouragement and blessing, that’s [Commander] Alison Heydari.’

She also admitted that while the recent investigation had rooted out all the racist officers in the SOCU unit, the constabulary had to remain ‘proactive’.

The most junior officer, Ferguson, who broke down in tears while giving evidence, was handed a final written warning.

Mr Bassett said: ‘Of those appearing before us he was the last to join and did so only three months before the probe.

‘By the time he joined the culture in the unit was well established… when he was exposed [to it] the panel accepts he was conflicted by what he witnessed.

‘The panel considers the likelihood of him repeating his conduct remote but he should be under no illusion, were he to breach the standards in any way he would be dismissed.’

Shortly after joining the unit, Ferguson told his father about the appalling language, but his father simply said ‘this is the way it used to be’.

Mr Bassett described his father’s comments as ‘poor to put it mildly’.

DI Ireson, who along with DS Willcox was found guilty of failing to supervise and set boundaries for the team, had previously claimed ‘swearing was in the fabric’ of the force. 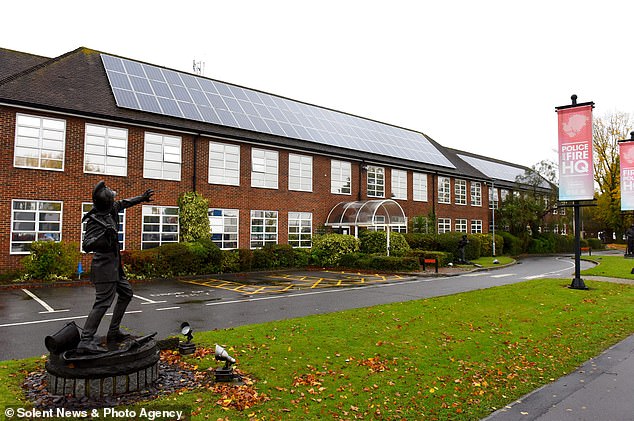 Counsel for DI Ireson, Luke Ponte, said: ‘His intention was to permit a more relaxed atmosphere which he felt would sustain a cohesive and productive team.

‘He accepts too much allowance was given…’

The hearing was told officers likened the unit’s only black officer, DC Solomon Koranteng, to a mixed breed dog, sang the Bob Marley song Buffalo Soldier at him and said he had been flown ‘from Africa in a crate’ and taken to London Zoo.

The squad also placed a map of Africa above the area in the office where DC Koranteng and another officer of African heritage sat and nicknamed it ‘African Corner’.

Three members of the team were heard joking that ‘Albanian migrants’ should be shot on entry to the UK or killed with a nerve agent and called women ‘sluts and whores’.

Speaking after the sanctions were announced today, Chief Constable Olivia Pinkney said: ‘During the hearing, the Panel heard a catalogue of sexist, racist, homophobic and ableist language and commentary that has rightly shocked us all and understandably left people with many questions about how this has been allowed to happen.

‘I have always said that policing is built upon the values of professionalism, compassion, courage and integrity and the public have a right to expect the highest standards from the officers and staff who are entrusted to keep them safe.

‘These officers have failed to deliver on the promise they made to uphold fundamental human rights and accord equal respect to all people, the oath they declared when they took the office of constable.

‘Policing has never before been under so much appropriate scrutiny to ensure an inclusive environment for all our officers and staff to flourish and bring their best.

‘There is no place in my force, or in policing more widely, for those who do not live up to this standard. These behaviours fell far short of those expected by me.’

Joanna Bunch, an intelligence analyst who worked on jobs with the team, said: ‘The SOCU Office North just seemed to be stuck in a time from 25 years ago.’

DI Ireson has retired and PC Bannerman has resigned since the covert recordings were made at the force’s serious organised crime unit.

The panel was made up of Mr Bassett, a male police superintendent and a female lawyer.

All of the officers, with the exception of Ferguson, were also placed on the police barred list.

Brexit: Market ‘liberalisation’ could lift currency says expert Despite the Brexit trade deal clinched on Christmas Eve, businesses across the UK have quickly discovered that…

The brother of one of the Reading terror attack victims has spoken on what would have been his 40th birthday, saying his life had been…

MILTON KEYNES, BRITAIN (REUTERS) – British couple Elizabeth Kerr and Simon O’Brien had been planning to marry in June. Then Covid-19 struck. Both contracted the…