‘Farewell Ma’am!’: Toddler twins leave a tribute to the Queen amid the flowers at Hillsborough Castle, as children across the nation pay their respects with Paddington Bears, marmalade sandwiches and poignant hand-drawn cards

As the nation mourns the death of the Queen, her subjects have left touching tributes across the country.

Even the youngest generation were moved to pay tribute – among them two-year-old twins Abigail and Arabella Glen at the gates of Hillsborough Castle in Northern Ireland.

Outside Windsor Castle, a poignant card depicted the late Queen and Prince Philip walking hand in hand beside one of her beloved corgis, and bore the message: ‘Farewell, Ma’am!’

In London’s Green Park, among the flowers left by mourners lay a Paddington Bear – a touching reminder of the delightful comedy vignette Her Majesty had filmed for her Platinum Jubilee in June. 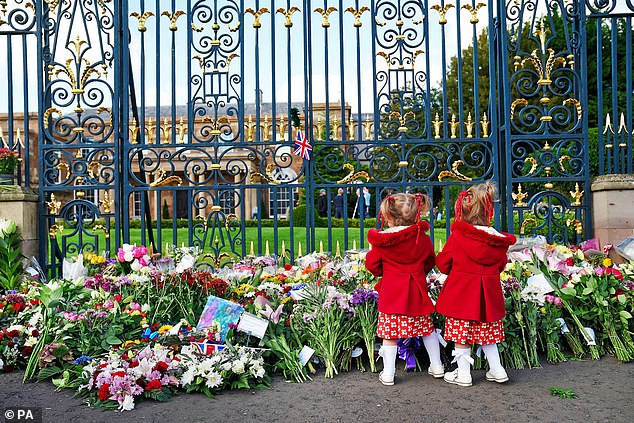 Children across the nation have paid their respects to the Queen. Among them are two-year-old twins Abigail and Arabella Glen (pictured) at the gates of Hillsborough Castle in Northern Ireland

In Scotland, at the Palace of Holyroodhouse in Edinburgh, one visitor left a copy of Michael Bond’s book Paddington At The Rainbow’s End.

A note written on it said simply: ‘One last story Ma’am. X’

Another well-wisher left a marmalade sandwich inside a zipped plastic bag next to a stuffed Paddington Bear.

Sports stars and crowds in matches across the country yesterday held a minute’s silence in memory of Her Majesty. 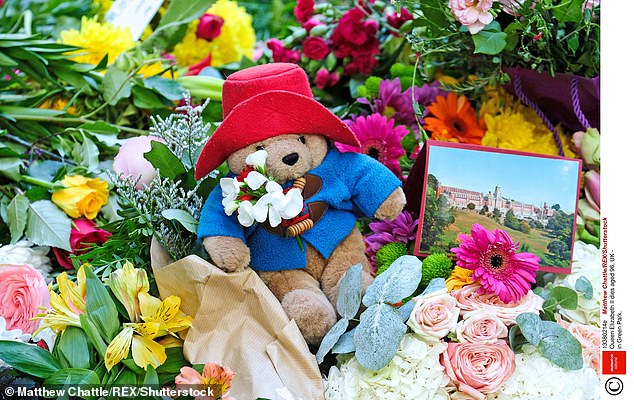 The younger generations have been leaving Paddington Bears, Marmalade sandwiches and hand-drawn cards all over the country

In Windsor tens of thousands of people crowded into the streets around the castle with cries of God Save The King filling the air.

England cricketers were joined by the Oval spectators in London for a rousing rendition of the national anthem as the Test match against South Africa finally got under way.

At the PGA Championship at Wentworth, Surrey, golfers stopped for a two-minute silence just before King Charles’s proclamation as Monarch at 10am. At Balmoral Castle in Aberdeenshire, where the Queen died on Thursday, the authorities urged people paying their respects not to drive to the site and to walk instead. 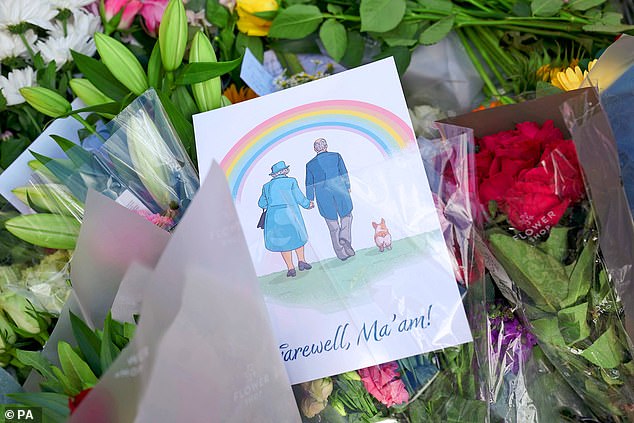 Outside Windsor Castle, a poignant card depicted the late Queen and Prince Philip walking hand in hand beside one of her beloved corgis, and bore the message: ‘Farewell, Ma’am!’

Hillsborough’s historic castle in County Down was the official residence of the Queen and other Royal Family members when visiting Northern Ireland.

A massive security operation was under way before most people in the village had woken up, with police closing roads, erecting barriers and cones, as well as carrying out security sweeps ahead of the ceremonial activities. Yesterday morning a 21-gun salute was sounded inside the castle grounds at the moment when King Charles was proclaimed as the new Monarch.

Outside the gates, hundreds of people had gathered while a lone piper could be heard playing the God Save The King and Abide With Me. 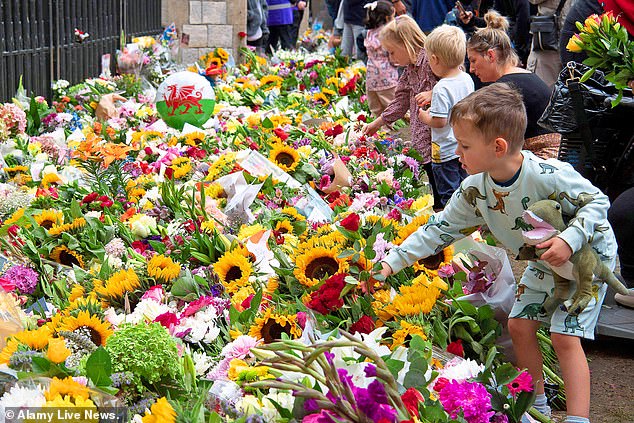 The village’s association with the Monarchy is so deep that last year it was renamed Royal Hillsborough, the first location in Northern Ireland to be granted Royal status.

Meanwhile, on Friday night the Tyne Bridge in Newcastle was lit up in a regal purple to honour the life of Her Majesty. And Welwyn Hatfield Borough Council in Hertfordshire encouraged locals to leave floral tributes to the Queen in the town centre.

‘Once the period of national mourning ends, we will compost the flowers to use in the planting of a memorial tree,’ a council spokesman said.