China and Iran are working to sway US voters against President Donald Trump while Russia is working against his rival, Joe Biden, intelligence agencies said Friday.

"Many foreign actors have a preference for who wins the election, which they express through a range of overt and private statements; covert influence efforts are rarer," National Counterintelligence and Security Centre Director William Evanina said in a statement. 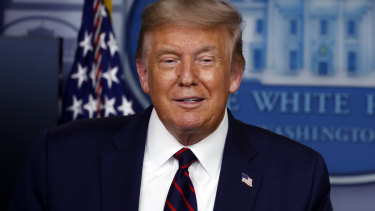 The statement provides the latest intelligence-community assessments of threats by foreign actors to disrupt and influence the election less than three months ahead of the vote.

At the top of the list is China, which sees Trump as "unpredictable" and has been increasingly critical of the president on COVID-19, Hong Kong and TikTok.

Iran also sees a second Trump term as a threat to its regime, and will use online influence to spread disinformation about the election, Evanina said.

But the assessment says Russia, which worked on behalf of Trump and against Hillary Clinton in the 2016 campaign, sees Biden as part of an anti-Russia establishment and will use social media and television to denigrate his candidacy.

Evanina said the intelligence community's assessments were objective and nonpolitical and that it was briefing both candidates and members of Congress about threats.

Chris Krebs, director of the Department of Homeland Security's Cybersecurity and Infrastructure Security Agency said "Americans should rest assured that we are working to ensure our elections remain secure."

National Security Council spokesman John Ullyot said the US "will respond to malicious foreign threats that target our democratic institutions."

"The United States is working to identify and disrupt foreign influence efforts targeting our political system, including efforts designed to suppress voter turnout or undermine public confidence in the integrity of our elections," he said.

Democratic senators like Chris Murphy and Richard Blumenthal who received classified intelligence briefings on foreign election interference in recent days have been alarmed and had demanded a public release of information they received.

Rubio called on Congress to extend the deadline for states to count their ballots to January and to pass his bill to sanction countries found to interfere in future American elections.

Rubio and the senior Democrat on the committee, Virginia Senator Mark Warner, put out a joint statement calling for the release of all possible information about election interference to fight it.

"And we encourage political leaders on all sides to refrain from weaponising intelligence matters for political gain, as this only furthers the divisive aims of our adversaries," they said.

Evanina said foreign actors may try to disrupt election equipment in order to call into question the legitimacy of the election, but concluded "it would be difficult for our adversaries to interfere with or manipulate voting results at scale."

Amid voting in the 2020 primaries, senior national security officials observed that Russian disinformation was ongoing and that foreign actors were using disinformation to influence the public and weaken confidence in democratic institutions.

The November election will also take place during the coronavirus pandemic – a crisis that has seen hacking and disinformation by US Competitors. The State Department has warned that foreign adversaries have used the outbreak to spread disinformation to advance their priorities.

Meanwhile, cybersecurity experts have seen a spike in hacking during the pandemic, which has included a Chinese government attempts to access valuable research on coronavirus vaccines and treatments.