Arsenal’s game on CCTV replaced with a prerecorded match between Tottenham and Wolverhampton Wanderers. 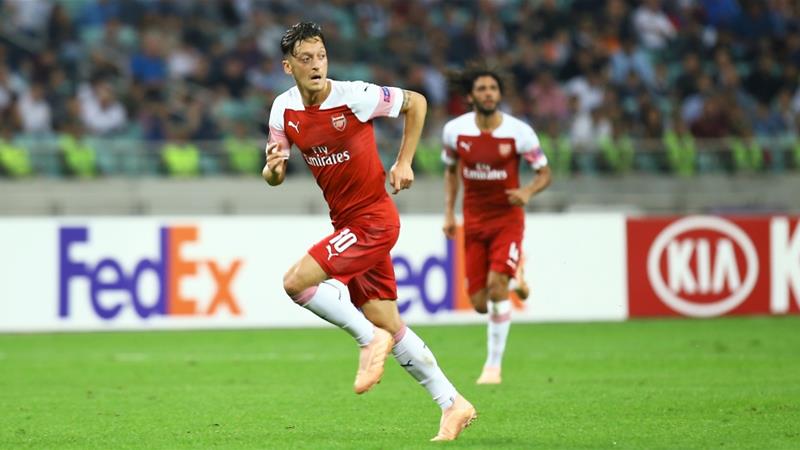 Chinese state broadcaster CCTV has pulled a game between Arsenal and Manchester City from its programme after Gunners midfielder Mesut Ozil expressed support for Uighurs in Xinjiang.

Ozil, a German of Turkish origin, condemned China’s crackdown on Muslim minorities in the western region in a tweet on Friday, while criticising Muslim countries for failing to speak up against China’s policies towards its Muslim Uighur minority.

Sunday’s Premier League game in London between Arsenal and Manchester City was initially due to be broadcast live by CCTV’s sports channel shortly after midnight on Monday, according to a schedule published earlier on the league’s official Weibo account.

However, by Sunday, CCTV replaced the match on its schedule with a prerecorded game between Tottenham and Wolverhampton Wanderers.

“Korans [Qurans] are being burnt … Mosques are being shut down … Muslim schools are being banned … Religious scholars are being killed one by one … Brothers are forcefully being sent to camps,” Ozil wrote in Turkish on his Twitter account on Friday.

“The Muslims are silent. Their voice is not heard,” he wrote on a background of a blue field with a white crescent moon, the flag of what Uighur separatists call East Turkestan.

The United Nations and human rights groups estimate that between one and two million people, mostly ethnic Uighur Muslims, have been detained in harsh conditions in camps in Xinjiang as part of what Beijing calls an anti-terrorism campaign.

In a report last September, the United States-based rights group Human Rights Watch accused the Chinese government of carrying out a “systematic campaign of human rights violations” against Uighurs in Xinjiang.

After initially denying the camps existed, China now describes them as vocational schools aimed at dampening the allure of Islamist “extremism” and violence.

Meanwhile, Arsenal on Saturday distanced itself from Ozil’s comments, saying it has “always adhered to the principle of not involving itself in politics”.

Ozil’s comments drew anger online, with some users on Weibo calling for a ban on his games.

Nationalist tabloid Global Times called Ozil’s comments “false” and said in a tweet on Sunday that he had “disappointed Chinese fans and football governing authorities”.

Arsenal is the latest foreign team to face the ire of Chinese broadcasters and audiences due to a player’s political stance.

In response, CCTV cancelled its broadcast of two NBA preseason games in China, and the Rockets have been absent from CCTV and internet giant Tencent’s programming schedule so far this season.

We will use your email address only for sending you newsletters. Please see our Privacy Notice for details of your data protection rights. British holidaymakers…