MANILA (Reuters) – Chinese leader Xi Jinping visited the Philippines on Tuesday to further strategic gains made under President Rodrigo Duterte, who hailed a “new impetus” behind a relationship that his massive infrastructure ambitions could depend on.

Xi’s visit comes two years after the maverick Duterte declared he was reorienting his foreign policy away from longtime ally the United States and toward China, despite decades of mistrust and bitter maritime disputes with Beijing.

Duterte is facing criticism from opponents for making too many political concessions to China in return for billions of dollars of pledged Chinese loans and investments that have yet to materialize, or be committed to formally.

The two leaders on Tuesday oversaw 29 agreements of sorts, many of them broad or vague, from cooperating in education, culture and industrial park development to jointly promoting infrastructure, agriculture cooperatives and establishing sanitation protocols for shipping coconuts.

Duterte said there was “a deepening trust and confidence” between them and he and Xi had discussed increasing trade and investment, and China’s involvement in his signature $180 billion “Build, Build, Build” infrastructure program.

“With mutual respect, sincerity and adherence to sovereign equality, I will continue to work closely with President Xi,” he said.

However, of the 38 Philippine projects earmarked for Chinese involvement two years ago, only four were among the commitments made on Tuesday.

One was approval for a Chinese loan for building a $232.5 million dam, another a hiring of a consultancy for a rail plan. The other two were to start feasibility studies on an inter-island bridge, and a highway in Duterte’s home province.

Xi said he and Duterte would elevate their relationship to one of “comprehensive strategic cooperation”, adding that they had many common interests in the South China Sea, and would continue to “manage contentious issues”. 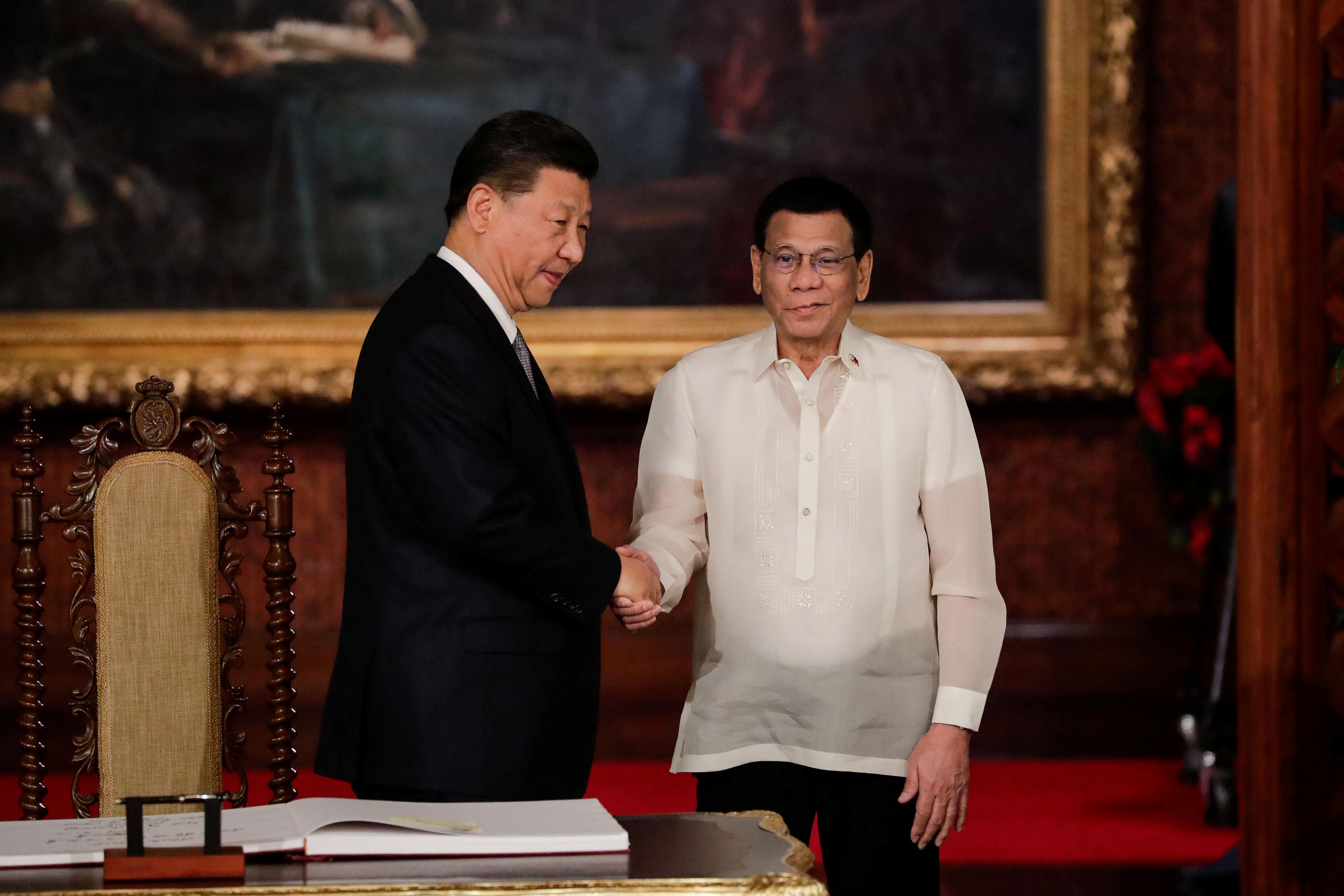 Duterte’s management of those issues has frustrated nationalists, who say he has been submissive in refusing to criticize China’s military buildup, or asking for its compliance with a 2016 arbitration award that invalidated its claim to almost the entire waterway.

Though public opinion is largely supportive of Duterte’s presidency, surveys consistently show reservations about his China policy and his personal dislike of the United States.

A Social Weather Stations poll of 1,200 Filipinos released on the eve of Xi’s visit showed 84 percent felt it was wrong not to oppose China’s militarization of its manmade islands in the South China Sea.

It also showed trust in the United States remained “very good”, but China was considered “poor”.

Asked about that survey, presidential spokesman Salvador Panelo said Duterte’s strategy was to avoid a conflict while reaping the rewards of improved business.

“They are not aware of the real geopolitics in the region. The president is a very cautious diplomat,” Panelo told news channel ANC.

“Rather than provoke, he’d rather talk with them and get some trade relations that will benefit this country.”

In comments prior to the two leaders’ meeting, Panelo accepted the slow pace of China delivering on its investment pledges, but said he expected Duterte to be brave enough “to exert pressure” on Xi. 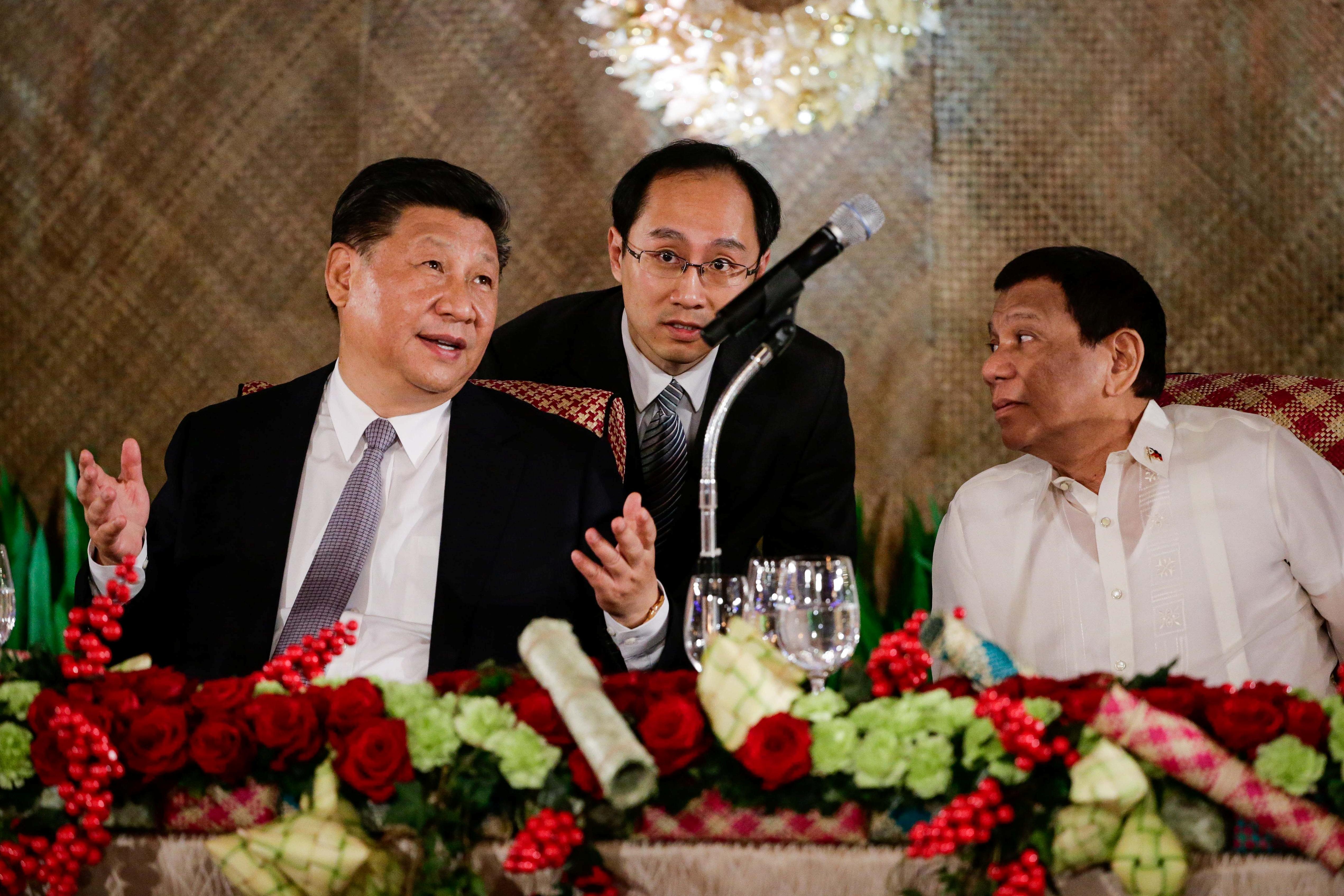 “Knowing the man, he’ll do that, he’s that kind of person,” Panelo said.

Duterte has heaped praise on Xi for his economic support, but some analysts say he is being exploited.

Other Philippine experts say delays in securing Chinese credit could be a blessing given the potential debt burden, echoing a warning delivered by U.S. Vice President Mike Pence.